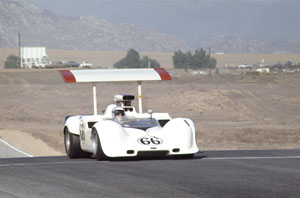 Jim Hall (below) is happy to hear that there’s so much interest in his Chaparral Can-Am and long-distance sport cars, as well as in the rapid rate of evolution motor racing went through in the 1960s and ’70s as documented in the February edition of Motor Sport. “It was a really interesting time, and I think it’s just one of those things that happens during life or history,” says Hall. “As I look back on it, the way those cars developed during that 10 years or so was really an amazing thing. I’m really proud to have been part of it.” 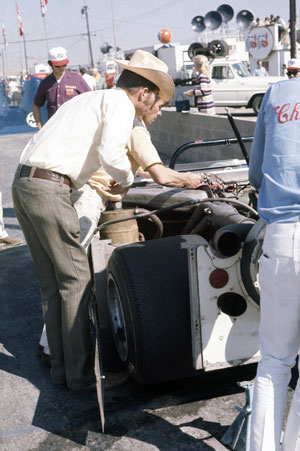 But when the ground-effect era finally arrived with full force it settled on a Lotus 79-like concept that has remained unchanged over the 30 following years. “What happened was everybody ended up with the same configuration and that’s where the innovation stops a little bit because once everybody’s focused around what works the best it’s hard to jump to something new,” observes Hall. “Once you zero in on what works best it’s damn difficult for anybody to say that there’s a better way to do it.”

Hall’s Chaparral 2K (below, sponsored by Pennzoil) – designed by John Barnard and driven in 1979 by Al Unser and in 1980-81 by Johnny Rutherford – achieved the same effect in Indycar racing. “We kind of copied the Lotus 79 and put together an Indycar with the radiators in the sidepods. The position of the tunnels and everything in that car was similar to the Lotus 79, and after that every Indycar practically up to this time remains the same in essential layout and concept. They’re certainly much more sophisticated in their manufacture and have a lot more performance in a lot of ways, but the configuration is basically the same.” 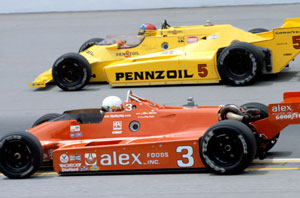 Does Hall see any possibility for change? “Well, I’m not close enough to the sport these days to be able to say. But it seems like with all types of racing today the rules are written so tightly that there’s no room for what we did with the Chaparrals and what [Colin] Chapman and other guys did in Formula 1. Like I say, it was a certain time in history that came along and now it’s gone. I guess that’s the way life and history works.”