Josef Newgarden was lucky to escape from a big crash at the Texas Motor Speedway last weekend with no worse injuries than a broken right clavicle and hand. It’s a testament to the crash resistance of today’s cars that Newgarden emerged relatively unscathed from such a huge shunt and will be able to return to action in the near future.

Of course, it’s irrefutable that high-banked superspeedways have never been friendly to Indycars. America’s high-banked oval tracks were conceived by the likes of Bill France and Bruton Smith as a means to promoting speeds for NASCAR stock cars that were as faster, or even faster, than the numbers achieved by Indycars at Indianapolis.

Bill France opened his crown jewel Daytona International Speedway in 1959. The giant 2.5-mile track was the same length as Indianapolis but, while the IMS comprises four distinct corners inclined at only nine degrees, France’s new speedway was a trioval and its turns were banked much more steeply – 31 degrees at either end and 18 degrees through the trioval kink at the start/finish line.

Daytona was opened in February of 1959 and the first 500 produced spectacular speeds and a photo finish with Lee Petty winning by a whisker from Johnny Beauchamp. A few months later USAC ran an Indy car race at Daytona but the 100-mile race ended badly when George Amick crashed on the last lap and was killed instantly. Amick had finished second at Indianapolis in 1958 and was USAC’s top young star at the time. During testing a few weeks earlier NASCAR star Marshall Teague had been killed testing an Indy car and as a result of Teague and Amick’s deaths Indycars would never again race on Daytona’s high banks.

The following year Bruton Smith (below) opened a pair of high-banked 1.5-mile superspeedways at Atlanta and Charlotte which became staples of NASCAR’s steady growth to establishing itself as the dominant form of car racing in America. At the end of the ’60s France launched the biggest superspeedway of them all, the 2.66-mile Talladega trioval in Alabama. Ironically, starting in 1988 NASCAR introduced restrictor plates designed to dramatically reduce speeds for its races at Daytona and Talladega because of fears of crashing cars getting into the crowd. 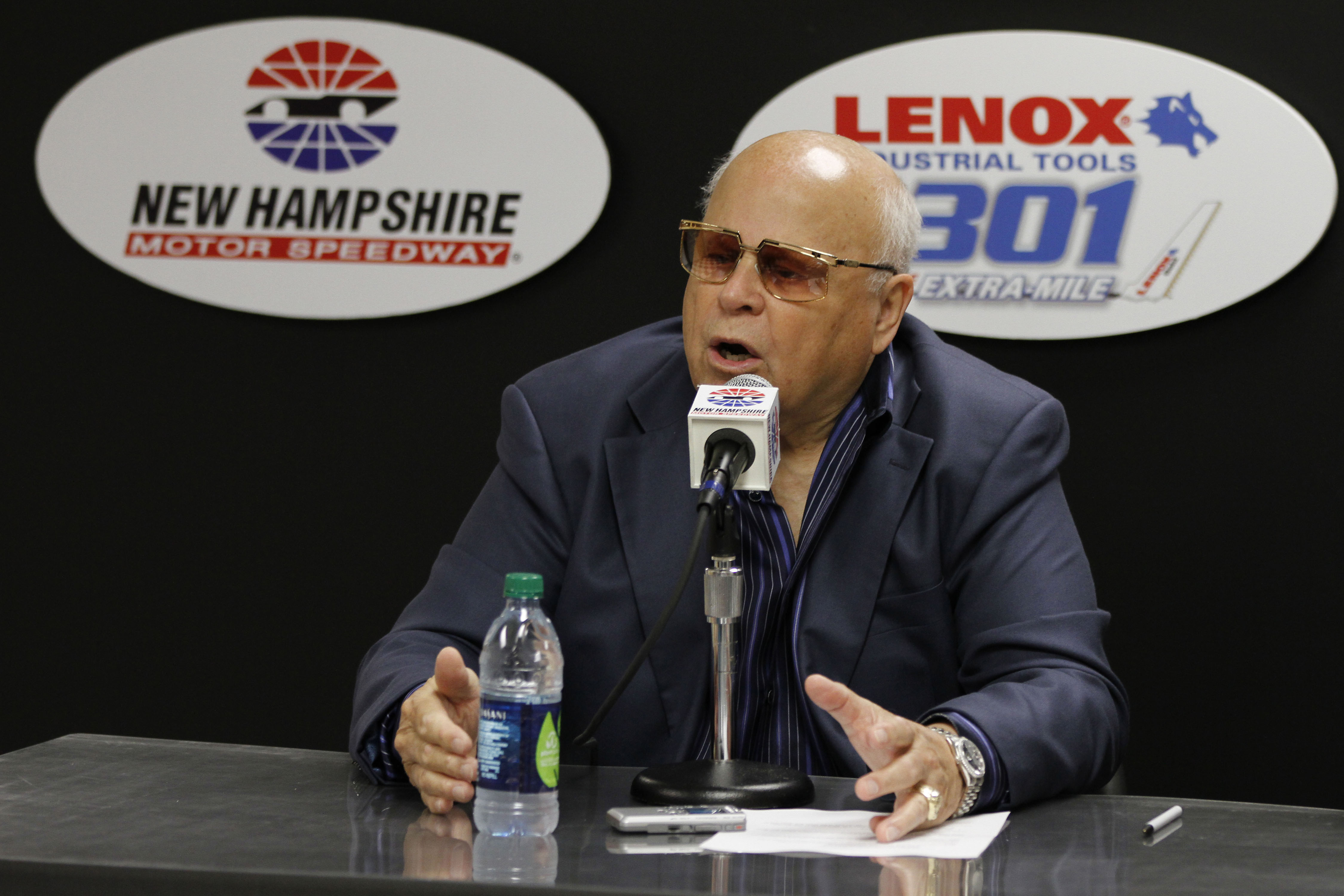 Meanwhile, the 2-mile Michigan International Speedway was also opened in 1968 and more recently quite a few other high-banked superspeedways have been built by both the France family’s International Speedway Corporation and Bruton Smith’s competing SMI operation, including Texas, Las Vegas and Fontana in California. Most of these tracks have run some Indy car races over the years, sanctioned by each of USAC, CART, IRL and IndyCar. But few of them have made successes of their Indycar experiments and too many drivers have been injured or killed in accidents on high-banked superspeedways.

Dan Wheldon lost his life at Las Vegas in 2011; Kenny Brack was seriously injured at Texas in 2003; Greg Moore died at Fontana in 1999; a flying wheel from Adrian Fernandez’s car killed three spectators at Michigan in 1998; flying debris also killed three fans seated in the grandstands at an IRL race at Charlotte in 1999.

Nor should we forget that CART’s highly respected chief steward Wally Dallenbach was asked to inspect the Texas Motor Speedway in 1996. Dallenbach ruled that the track was unsuitable for Indy car racing because speeds would be too high and the nature of the banking was likely to exacerbate the severity of any accidents. Dallenbach said the banked track was too steep and the corners too tight with insufficient banking to properly carry the cars off the corners and onto the straightaways.

But Dallenbach retired at the end of 1999 and the following year CART decided to race at Texas in 2001. Because it was a publicly traded company with constant pressure to produce annual profits, CART was under pressure to add races to its calendar with large sanction fees which was a primary motivation to deciding to attempt to race in Texas. Another reason was that some sponsors wanted their teams to appear in the booming Dallas market so that commercialism overruled safety.

However, two days of practice and qualifying confirmed everyone’s worst fears about the high-banked 1.5-mile superspeedway (below) as the g-forces generated proved too much for the human body to withstand with most drivers suffering dizzy spells and some of them blacking out.

Data showed the drivers were undergoing sustained vertical g-loads of more than 3.3 and lateral loads of more than 5g. CART’s director of medical affairs Dr. Steve Olvey said the combination of these loadings could seriously affect the inner ear and blood supply to the brain. Dr. Olvey explained these effects to the drivers and discovered that all but four of them had experienced some symptoms and had gone into the pits as a result. The four drivers who had escaped such feelings had only run a few laps at any time. 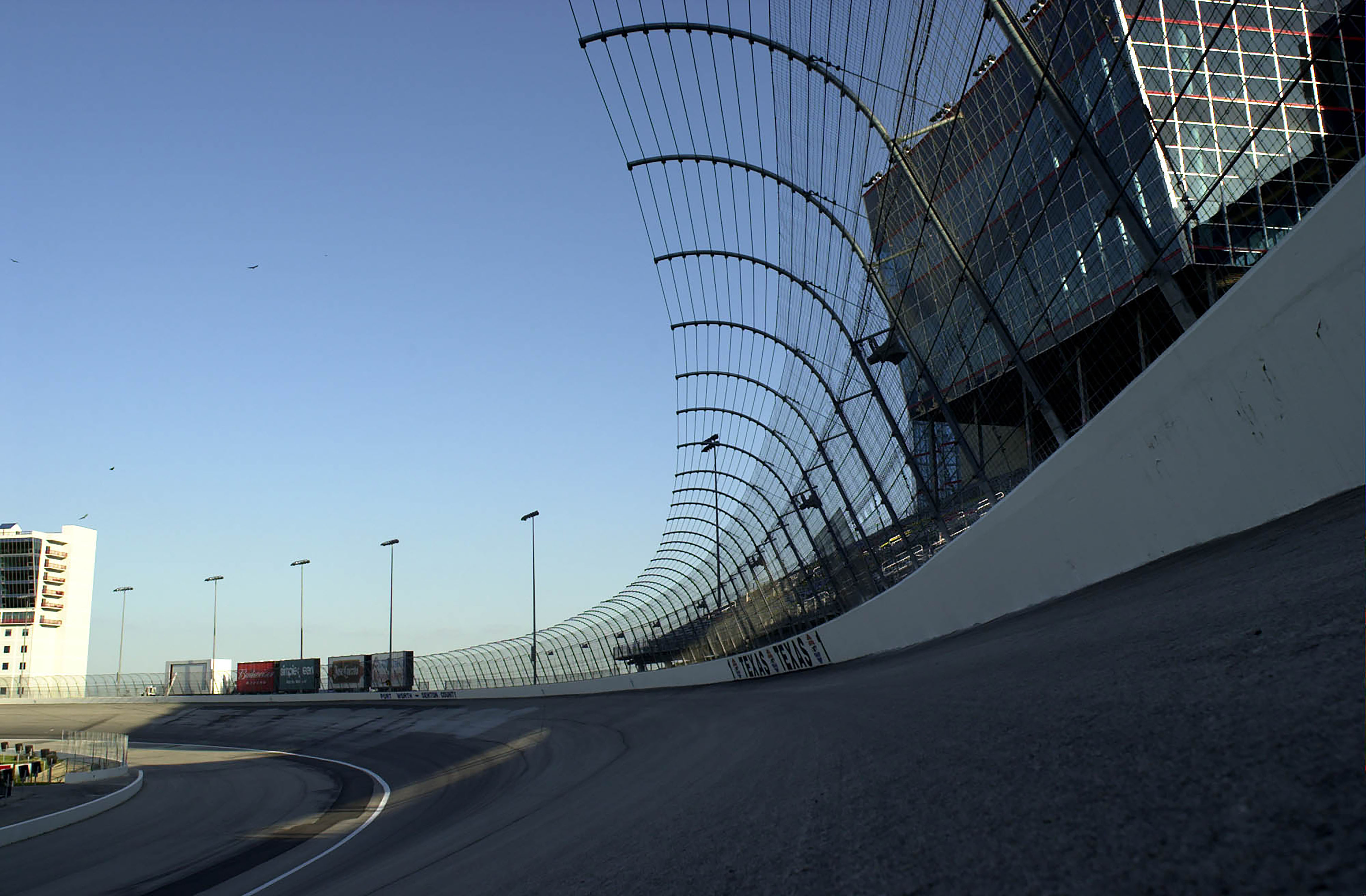 Two big collisions with the wall added to everyone’s worries. Cristiano da Matta and Mauricio Gugelmin crashed heavily in separate accidents with Gugelmin’s massive shunt occupying more than half the track. It started in turn two where Gugelmin’s car hit the wall for the first time, recording a frontal impact of 66g. The badly wrecked car continued sliding down the backstretch before striking the wall again in turn three, this time taking a 113g backwards hit. Incredibly, in a testament to the energy-absorbing crashability of the cars, Gugelmin was badly bruised but otherwise unhurt.

The decision to cancel the race was made at the last minute as fans were coming into the track on the morning of the race leaving many of them unhappy. In the end, safety won out, but the cancellation resulted in a lawsuit and CART ultimately paid the Texas track an undisclosed multi-million dollar settlement. The blunder left CART with a very black eye and was a key element in CART’s subsequently rapid implosion and failure.

From the Archive: the way forward in solving the high-banked oval crashes (2012)

Meanwhile, the IRL had started running races at Texas in 1996 with its more restricted, slower cars and the Texas race has established itself as part of IndyCar’s modern schedule. For quite a few years, the track saw plenty of IRL-style ‘pack racing’, but after Brack’s accident in 2003 the IRL and then IndyCar have fiddled with the aero package to try to reduce that element and the possibility of more such accidents. Over the past 10 years crowds at Texas have dwindled, as they have at many IRL/IndyCar races, and the same story was evident last weekend.

Newgarden’s accident and persistent rain through the weekend meant the race was red-flagged and then postponed until August 28. This means the race will take place the week between the Pocono 500 and a newly scheduled race at Watkins Glen which has been added to replace a cancelled street race in Boston. It will make a hectic end to IndyCar’s truncated season for its teams who will join the rest of us in hoping that the race in Texas ultimately takes place without any drama.