The renowned IndyCar broadcaster and commentator Bob Jenkins has died.

The longtime Indianapolis 500 announcer, who had been suffering with brain cancer, passed away yesterday at the age of 73.

In a career that spanned five decades from the 1970s to the 2010s, Jenkins’s tones became synonymous with the Brickyard, both as a circuit announcer and commentator.

Jenkins attended his first 500 in 1960 as a child, and thereafter only missed two of the famous races for the rest of his life.

Beginning his media career in the slightly more sedate world of agricultural reporting, covering the world of Midwest farming scene for local station WIRE on the ‘AgDay’ show, the petrolhead found his way into motor sport by making his debut as an announcer on the back straight for ’79 edition of the 500 for the IMS Radio Network.

Jenkins also joined the fledgling ESPN television channel in the same year, eventually holding the lead commentator role for the station’s NASCAR coverage for over 20 years.

His involvement in motor sport media was diverse, as he also held the lead anchor role on ESPN’s ‘Thunder‘ programme, which covered USAC sprint car racing, whilst all lending his vocal expertise to the films Days of Thunder and Talladega Nights. 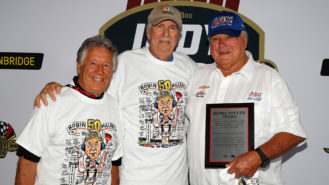 Jenkins’ commentary of the 1992 Indy 500 finish between Al Unser Jr and Scott Goodyear – the second closer in history at 0.43sec – became iconic in American open-wheel racing.

“Bob Jenkins had an incredible passion for racing and his enthusiasm, combined with his genuine love and knowledge of the sport, endeared him to motorsports fans all over the world. To an entire generation, the sound of Bob’s voice simply meant it was time to go racing,” said IndyCar CEO Roger Penske. “That legendary voice became the soundtrack for the Month of May at the Indianapolis Motor Speedway. We will miss Bob’s kindness, his professionalism and his unique ability to bring us all closer to the track with his stories and insights. Our thoughts are with Bob’s family and his many friends throughout the racing community and beyond.”

“Through all the successes, Bob never changed from what he truly was at heart – a race fan,” added IMS President J. Douglas Boles. “His humility and ability to always remain a fan – even when he was the top racing commentator in the sport – is why race fans around the world loved watching or listening to a race called by Bob Jenkins. He was one of us!”