The Lola T-90 in which Jackie Stewart came within ten laps of winning the 1966 Indy 500 is going up for auction, 55 years after its most famous race.

The ’66 edition of the Brickyard race was eventful to say the least, and saw Stewart announce himself as a force to be reckoned with Stateside.

The Scot qualified for John Mecom Racing in a solid 11th place, on a grid which featured defending 500 champion Jim Clark and JMR team-mate Graham Hill (also Stewart’s team-mate at BRM in F1), as well as a bevy of American stars including Mario Andretti, AJ Foyt, Bobby Unser and Dan Gurney.

Towards the end of the 500-mile race, the running order was Stewart – Clark – Hill with an all-British podium looking on the cards.

Unfortunately, with nine laps to go, the scavenge pump on Stewart’s Lola failed, filling the engine with oil and forcing him to make an unscheduled pitstop. 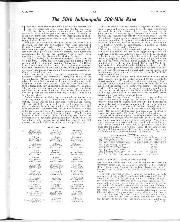 The 50th Indianapolis 500-mile race will be remembered for two major upheavals, other than the lap one crash. Firstly, it is the end of an era, the era of the…

The Scot ultimately finished sixth, with Hill winning in another Lola T-90, but there was controversy as there appeared to have been a lap counting error, with Jim Clark possibly actually having won. Hill ultimately kept his Brickyard victory, and is now the only man to have won motor sport’s unofficial ‘Triple Crown’ of Monaco, Indy and Le Mans.

The Lola T-90 was an update of the T-80, which retired early from the ’65 race due to reliability problems put down its rushed development.

90/2 was owned after its racing life by renowned Indy 500 car collector David Uihlein before being bought by the current seller in 1995.

The ’66 effort featured an aluminium monocoque supported by steel subframes. It’s powered by a Ford four-cam V8 and remains in the striking livery which made it stand out with Stewart.