For 10 or more years through the ’90s into the new century Australian race fans enjoyed a thriving CART IndyCar race on the streets of Surfers Paradise in addition to the Australian Grand Prix in Adelaide and its successor at Albert Park in Melbourne. On Queensland’s east coast, Surfers Paradise drew darn near as big a crowd as the F1 races to the south only to fall afoul of the CART/IRL war.

As CART fell into bankruptcy and was replaced for a few years by Champ Car the Queensland street race began to lose momentum, disappearing from the IndyCar calendar after Champ Car’s last remains were swallowed by the IRL in 2008. 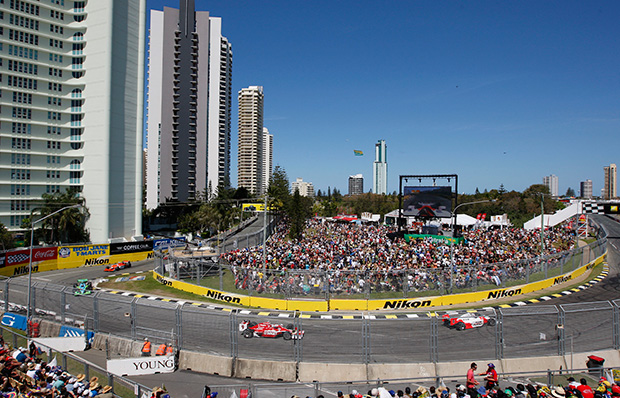 Today, Surfers Paradise survives happily as a round of the Australian V8 Supercar championship. It’s still a big weekend in Australian motor sport and continues to attract current IndyCar drivers but 20 years ago the race was entering its boom years.

Back in the early and mid-’90s Surfers Paradise was the opening round of CART’s IndyCar World Series and in 1993 there was added interest in the shape of 1992 World Champion Nigel Mansell who had decided to turn his back on Formula 1 and Williams to race for Paul Newman and Carl Haas’s Newman/Haas team.

Mansell made his IndyCar debut at Surfers Paradise in the middle of March, 1993, and his presence ratcheted up the worldwide interest in IndyCar racing. The current World Champion brought a flock of British newspaper reporters and photographers and a crush of global paparazzi the likes of which IndyCar racing had never seen.

Like all street races, Surfers struggled to establish itself and make money in its early years. Launched in 1991 the race had drawn well but Mansell’s appearance pushed the crowd to a new level with 220,000 buying tickets over the four-day weekend and 81,000 on raceday. 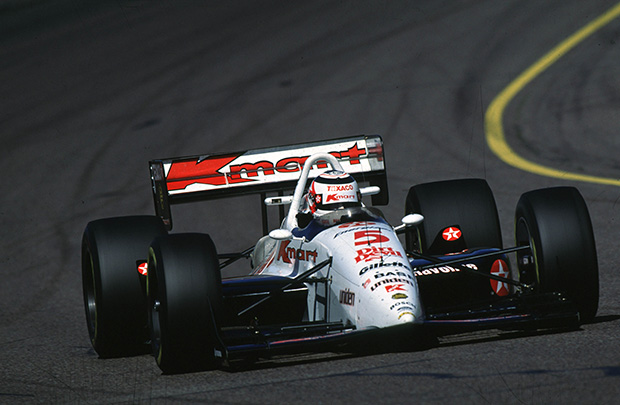 Typically, Mansell delivered. He qualified on pole position, messed up his first rolling start, then outbraked Emerson Fittipaldi for the lead in a cloud of tyre smoke. But it happened under a yellow flag and Mansell dropped to fourth after serving a penalty before motoring back to the front, easily beating Fittipaldi in the end after the Brazilian had to conserve fuel.

Mansell went on to win four more IndyCar races that year and take the CART championship. We’ll revisit the story of Mansell’s 1993 championship in the magazine a little later this year but as far as Surfers Paradise was concerned the following year was even bigger.

After an abortive part-season in Formula 1 with McLaren in ‘93, Michael Andretti returned to IndyCar racing in ‘94 with Chip Ganassi’s team. Mansell qualified on the pole with Michael second in Ganassi’s Reynard and they engaged in a fierce battle in the race. Delayed by a heavy cloudburst the race ran into the night with Michael scoring a resounding comeback victory. It was also Reynard’s first IndyCar win so there was quite a party that night.

Emerson Fittipaldi came through to finish second with Mario Andretti third while Mansell fell down the order in the late-race scramble, finishing ninth. But Michael could not have been more delighted to have beaten Mansell in a straight fight and also to share the podium with his father for what turned out to be the last time. “Beating King Nigel at Surfers Paradise was one of the most satisfying wins I ever had,” Michael grins. “I really enjoyed that one.” 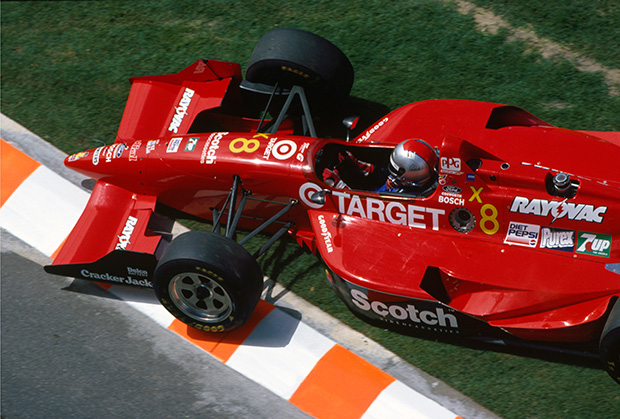 Today, Andretti is IndyCar’s champion owner with Ryan Hunter-Reay leading his four-car team. IndyCar starts its new season next weekend on a street circuit in St. Petersburg, Florida. The race in St. Pete is one of the stronger races on the calendar drawing a nice crowd, maybe 40,000, and everyone enjoys the location and atmosphere, but it’s nothing like Surfers Paradise in its heyday.

As everyone knows, IndyCar is struggling these days, a pale imitation of what it was 20 years ago, and the loss of Surfers Paradise was a classic example of the category’s many failures. Surfers continued to draw big crowds through the turn of the century before tailing off as CART, then Champ Car declined. It’s one of no fewer than 40 venues (street circuits, road courses and oval tracks) that gave up trying to make financial sense out running a CART, Champ Car, IRL or IndyCar race over the past 20 years.

"Are you telling me you built a time machine... out of a DeLorean!?" REC's latest limited edition timepiece is inspired by John DeLorean's iconic car, and made with metal from his very own DMC-12