This year’s Verizon IndyCar championship has turned into an intra-team battle between Simon Pagenaud and Will Power at Team Penske. Only four races remain on IndyCar’s truncated calendar – the ovals of Pocono and Texas in August and Watkins Glen and Sonoma road courses in September – and Pagenaud leads Power by 58 points (484 to 426), Helio Castroneves is third a further 53 points behind in Penske’s third of four cars. Josef Newgarden and defending champion Scott Dixon lead the chase but they’re both more than 100 points behind, too far back to figure in the championship reckoning. 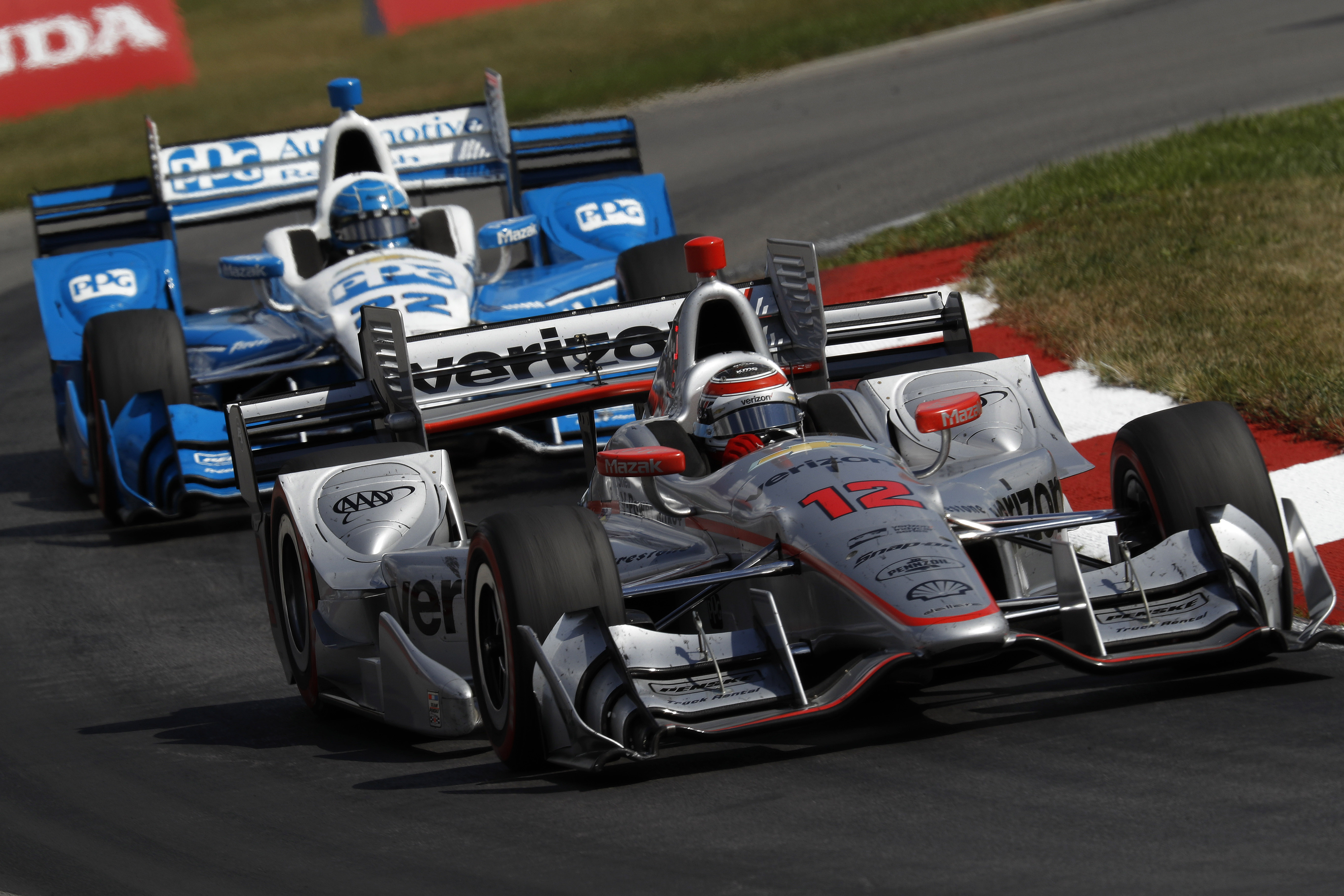 Pagenaud and Power have been the men to beat this year. Pagenaud has won four of 12 races run so far and has also taken six poles, whereas Power has won three times and has two poles thus far. Castroneves has been quick in many races but has yet to win while Juan Pablo Montoya won the season-opener in St. Petersburg but has had a miserable season since then with no additional podium finishes. He’s a distant 12th in points.

Nevertheless, this is shaping up to be Penske’s most dominant year since 1994 when the team won 12 races, Indy 500 included, and finished 1-2-3 in the championship. Penske’s four cars must win all four remaining races this year to equal that record while another sweep of the top three places in the championship is also a realistic possibility. Regardless of the year’s final results it’s sure to be a fitting celebration of the team’s 50th anniversary.

Pagenaud scored his fourth win of the year at Mid-Ohio at the end of last month after a fierce duel with Power. Pagenaud led the race’s opening stages but Power was able to pass him by running two laps longer on a load of fuel. Power stayed ahead of Pagenaud until a full course yellow brought a restart two-thirds of the way through the race. When the green flag waved again Pagenaud attacked Power, making a superb pass in the last turn as the pair banged wheels.

“That was fun!” Pagenaud grinned. “That was my chance on that restart. It was pretty interesting – fair, clean, hard racing. The car was really good, I could push hard and run fast laps. The car was great on the soft tyres and I pushed as hard as I could.”

After the race Power went directly to Pagenaud’s car and congratulated his teammate. “I said, ‘Good job!’,” Power remarked.

“I was asleep on that restart,” he added. “I regret that. I should have been better. I also had marbles on the tyres, but it was a good, clean battle. Simon saw an opportunity so he went for it, as he should. It’s tough finishing second with all the effort you put into the race but Simon did a great job. It’s turning into a pretty good battle. He opened up on the points obviously, but we’ve still got a shot at it.” 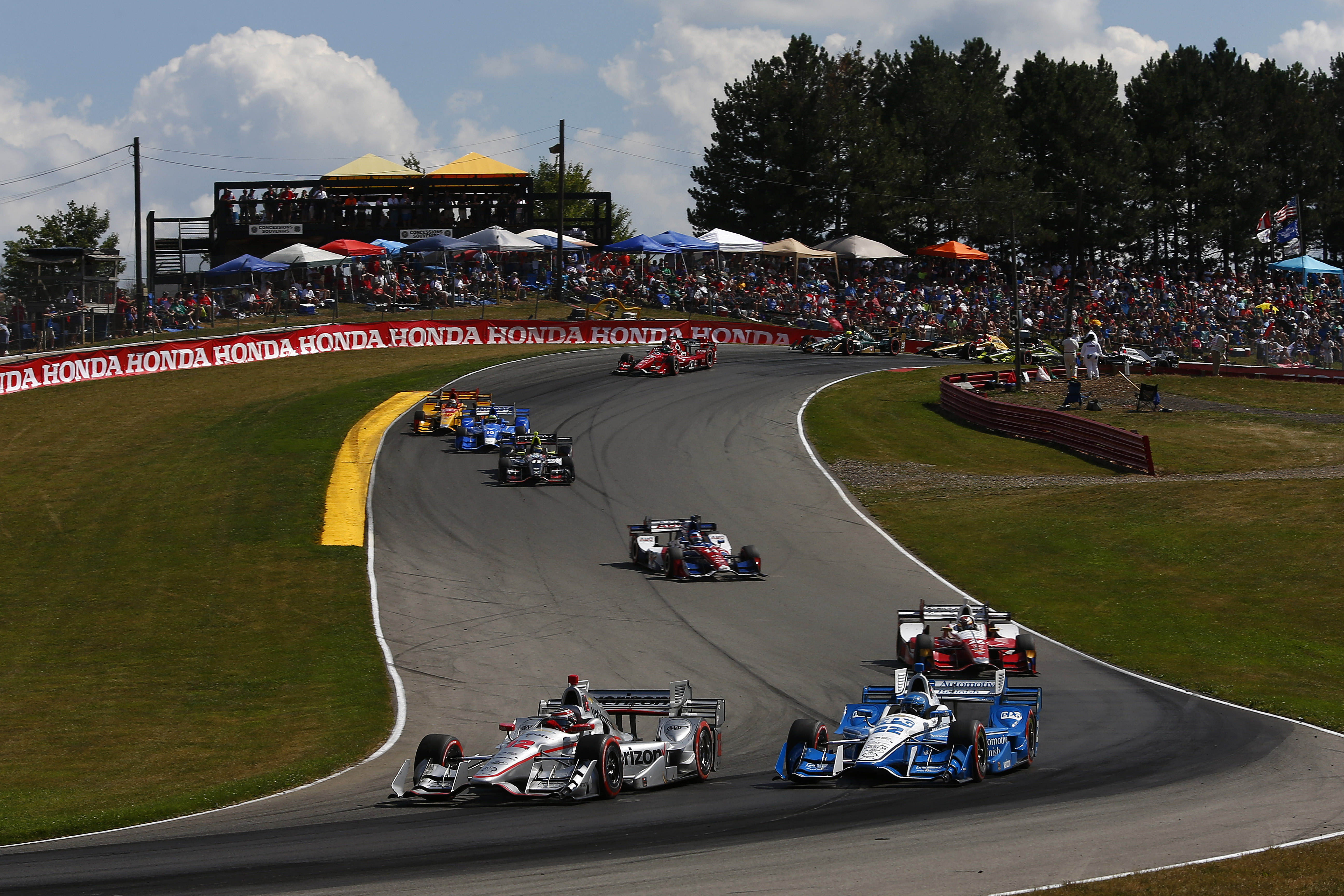 Team owner Roger Penske was delighted with the result: “These guys both want to win, that’s the reason they’re driving for us. Fortunately it didn’t cause a wreck and that’s all we ask of them. Race hard, but don’t wreck your team-mate.”

Pagenaud joined Penske last season after three years with Sam Schmidt’s team. He came to America in 2006, won the Formula Atlantic championship on his first try and moved up to Champ Car in ’07 with Derrick Walker’s team. Pagenaud raced LMP1 cars in the American Le Mans Series from 2008-11, winning the ALMS championship with David Brabham in 2010.

With Penske last year the Frenchman qualified on the first two rows eight times and led plenty of laps but wasn’t able to win a race. This year however he’s been the fastest man in IndyCar and has led the championship since April. Pagenaud, 32, is an intelligent fellow and a smooth, precise driver who’s demonstrated he can be as aggressive as anyone. He’s a clear favourite to win this year’s championship.

Power, 35, has been racing Indy cars for twelve years. This is his ninth year with Roger Penske’s multi-car team. Power finished second in IndyCar’s championship in 2010, ‘11 and ’12 before finally winning his first title in 2014. Last year, he finished third in the championship behind Dixon and Montoya after he and Montoya collided in the season-closer handing the title to Dixon. Power missed this year’s season-opener because of inner ear problems and was frustrated with his results over the next few races.

“It definitely wasn’t the start that I would have expected,” he admits. “I had some issues with my health, but I’ve got over that now. This year because of the cornering speeds and g-forces the car is the most difficult they’ve ever been to drive. You need to be at that critical stage of fitness and testing to be on your game and we missed some testing as well. But I’ve put a lot into my fitness program and I feel on top of it now.”

The Australian scored his first win in more than a year in Detroit in June. “Winning gives the whole crew a lot of confidence,” he said that day. “We’ve kind of been stumbling, the whole group of us. It’s been a tough start to the year. We missed the first race and there have been a few missteps, but now we’re there.”

Power commented on the fierce depth of IndyCar’s field. “You really can be on pole one week and you can be 20th the next week. At most races there’s less than a second covering the entire field of 22 cars. It’s unbelievable. If your car is slightly out of the window you can be the best driver in the world and you will be down the timing chart in IndyCar.

“This series is probably the most competitive in the world. It’s the most competitive it has been in its history just because of the nature of the rules. With all the data and analysis that we do these days, no one is going to find any extra speed. Everyone knows where everyone else is fast and how to do that so that just makes it even closer.” 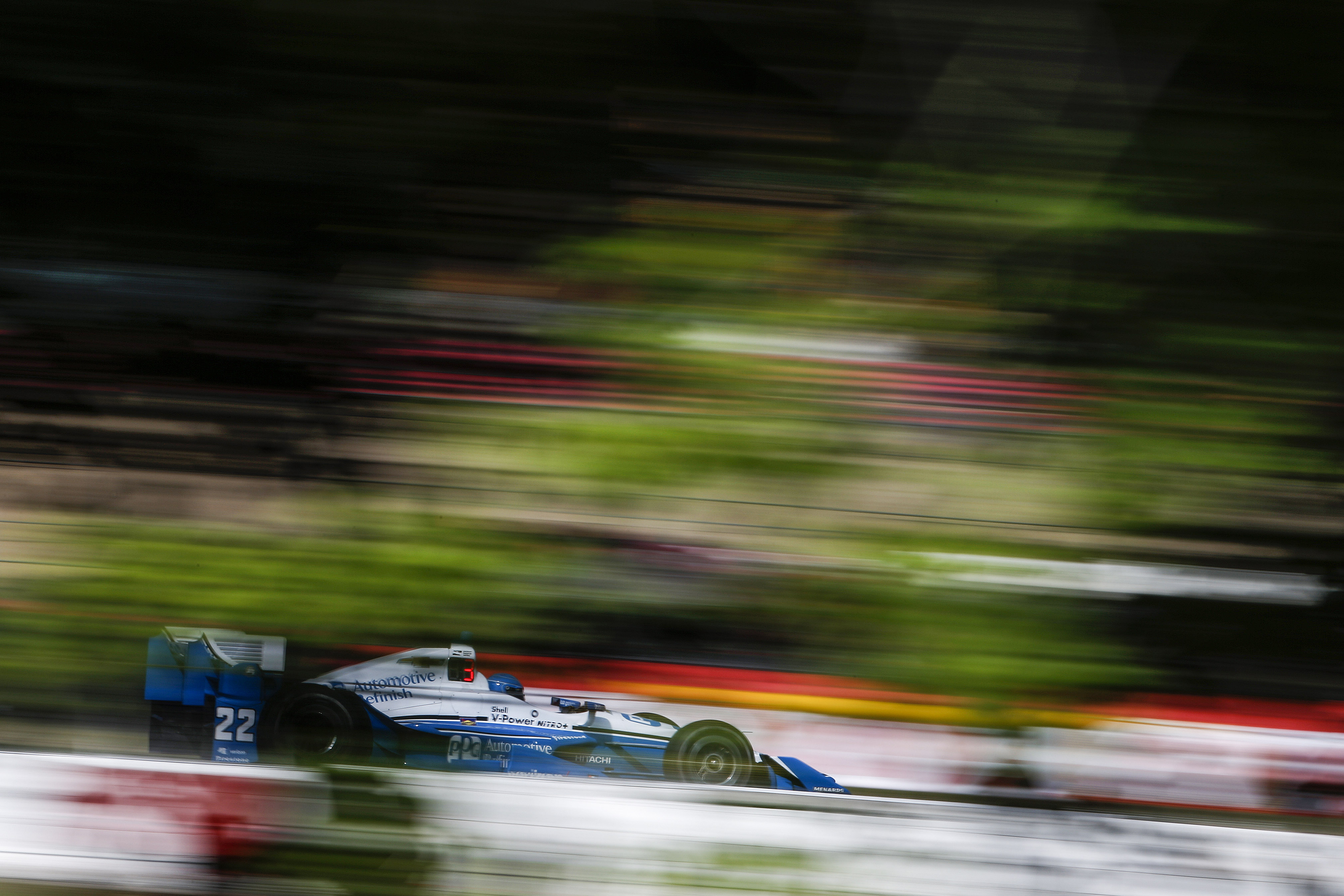 Power emphasized the many contrasts between IndyCar and F1. “In Formula 1 the cars are all different and the engines have different power characteristics so they perform very differently. F1 cars also have different levels of downforce unlike in IndyCar and everyone knows what downforce level everyone else is running. So this series has become very much a driver-detailed series.

“Guys come over from Europe and they find it is much tougher than they think. It’s one thing to test one of these cars but when it comes to the races it can be a bit of a shock. It’s very competitive and you’ve absolutely got to be on your game.”

Since retiring in 1992, four-time Indy 500 winner Rick Mears has continued with Penske’s team as a driver coach. Mears sits in the team’s engineering meetings and provides his years of racing wisdom to the drivers and engineers whenever required. Mears reflected on the depth of competition in IndyCar and the role played by frequent full-course cautions in such a fiercely competitive series: “When I look at the difference in lap times in practice and qualifying, it’s so close! With the equipment the way it is and everybody playing with the same blocks, at many races there’s only a second covering the entire field. Formula 1 has been tightening up a little bit lately, but it’s nothing like as close as IndyCar. I don’t know that in the history of Formula 1 it’s ever been as tight as it is in IndyCar. The field today is a close as it’s ever been in the history of Indy car racing and that makes lady luck even more important.

“You always have up and down years,” Mears added. “Last year, Simon (Pagenaud) was better than his results showed. He didn’t get the results for the job he was doing. Lady luck plays a big role in Indy car racing because of the nature of the rules and the yellow flags. A couple of times last year Simon made a pit stop just before a yellow came out and that put him to the back of the pack and the same things have happened to Helio this year.

“This year, Simon has had some good luck and he’s been strong everywhere so it’s all coming together for him. He’s showing what he can do. Will got off to a little bit of a rough start, but things have been falling into place and he’s been strong in all the races. It’s going to be a shit-fight to the end.”

And of course, unlike F1 where only one or two teams have realistic hopes of winning races, many teams are capable of winning in IndyCar. Power and Pagenaud will have to fight not only with team-mates Castroneves and Montoya, but also the likes of Dixon and Tony Kanaan with Ganassi, Newgarden with Ed Carpenter’s team, plus occasional potential winners like Ryan Hunter-Reay with Andretti, Graham Rahal with his father’s team and Sebastien Bourdais with KVH Racing.

As Mears says, it won’t exactly be a stroll in the park for Pagenaud, Power and Team Penske as they chase the team’s 14th IndyCar title. 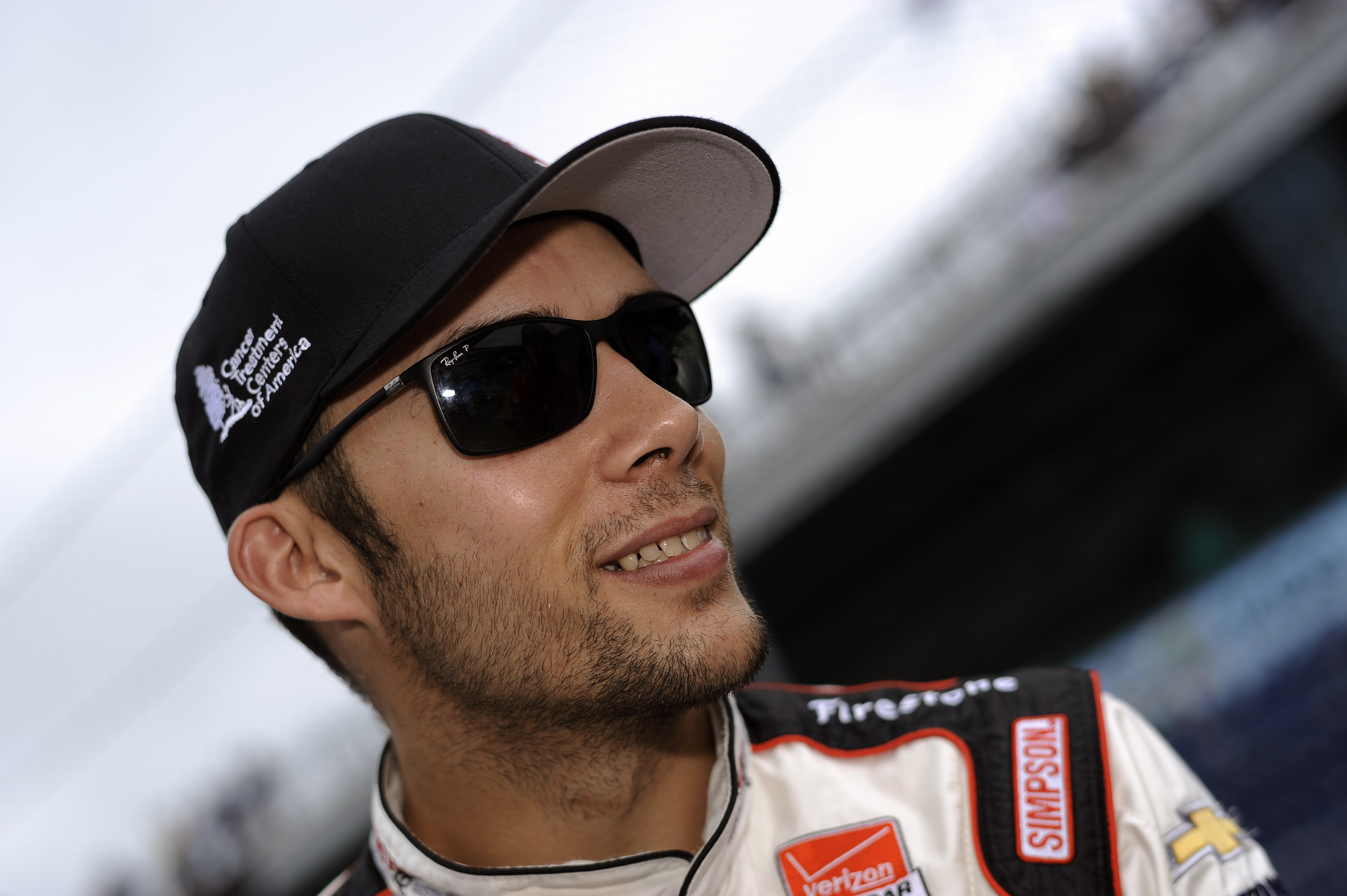 Indy 500 racer Bryan Clauson succumbed to injuries suffered racing in the Belleville Midget Nationals on Sunday August 7. He was just 27.

Motor Sport offers condolences to his friends and family.