Scott Dixon looked like he was on his way to the fifth win in a row this year for Chip Ganassi’s IndyCar team last weekend at the Sonoma road course in Northern California’s wine country. Dixon qualified on the outside of the front row beside team-mate Dario Franchitti and the Ganassi pair led most of the race with Dixon taking control in the race’s second half from Penske man Will Power chased by Franchitti and Justin Wilson in one of Dale Coyne’s cars. 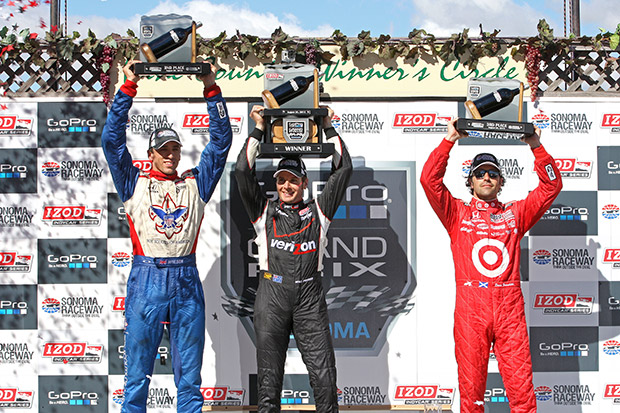 As Dixon and Power came in together for their final stops under the yellow with 20 laps to go it appeared that Dixon was going to close to within eight points of championship leader Hélio Castroneves who was running sixth at the time. But as he departed the crowded pitlane Dixon brushed a wheel and tyre from Power’s car being carried by Power’s right rear tyre changer. The collision knocked the Penske crewman off his feet and he tumbled to the ground, spraining an ankle. Two other Penske crewmen also received minor injuries.

On the restart Dixon was given a pitlane drive-through penalty, rejoining in 21st as Power motored home to score his first win in more than a year. Wilson was an excellent second from Franchitti, Marco Andretti, Simon Pagenaud and defending champion Ryan Hunter-Reay while Castroneves finished seventh. Dixon made it back to 15th at the chequered flag so that with four races to go he trails Castroneves by 39 points. While not impossible, the penalty threw cold water on Dixon’s late-season championship run and he was pretty unhappy about it believing the Penske crewman had deliberately walked into his path to try to slow his exit. 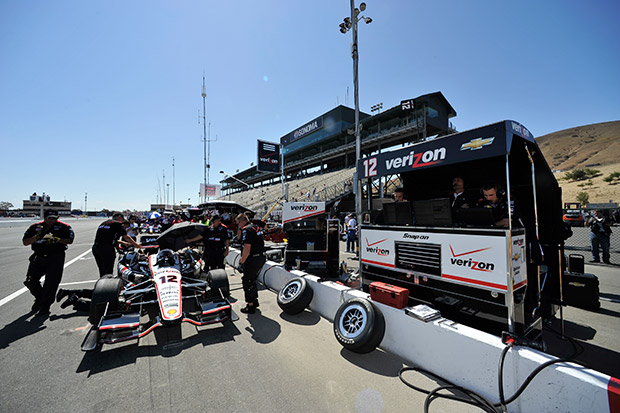 “He walked straight into our path,” Dixon said. “He walked towards us on purpose. That’s probably the most blatant thing I’ve seen in a long time. People usually try to get out of the way. That was a bit of a dick move, to be honest. I’m pretty annoyed by that. He was probably trying to get me to try and turn more, but I had a straight line out of the pit and he just walked into me. You look at the people in race control and how they make their calls and the consistency is horrible.”

Winner Power said he didn’t believe he crewman had deliberately walked into Dixon’s car. “I feel bad for Dixon but I can’t count the number of times that sort of thing has happened to us,” Power remarked. “So we’ll take it. My guys have worked so hard and I feel great. I would be very surprised if my guy walked into him. It’s not even worth commenting on.”

IndyCar’s race director Beaux Barfield commented on his decision to penalise Dixon. “Ultimately we have a duty to protect everybody in the pitlane,” Barfield said. “If we have somebody who uses less than great judgement when they leave their pitbox and we have an incident then certainly we’ve got to make a statement by penalising that guy. I feel good with the decision we made and making a statement that we want to keep the pitlane as safe as possible. 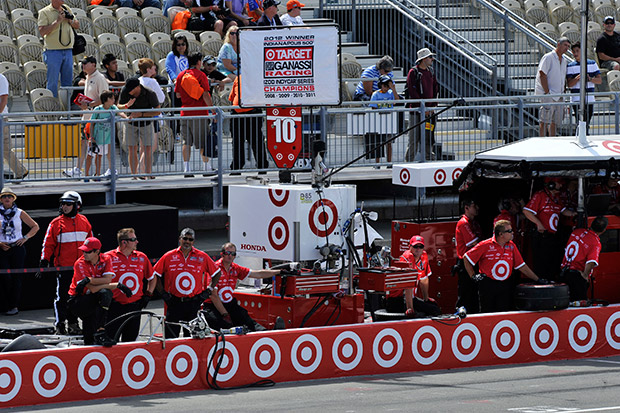 “There are a couple of different angles that show that he clearly put his left front wheel into Power’s pitbox and that’s where the violation occurred. That made it easy for us to make the call. If you look at risk versus reward of hurting somebody in the pitlane by gaining a couple of tenths of a second leaving the pitlane is not something we’re going to look away from and not penalise.”

Four races remain in IndyCar’s championship. Baltimore’s street race takes place next weekend followed by a double-header of street races in Houston on the first weekend in October. The season closes with the California 500 superspeedway race two weeks later.

At this stage Castroneves leads that championship with 479 points, 39 ahead of Dixon with Hunter-Reay another 23 points behind in third. Marco Andretti runs fourth with 409 points followed by Pagenuad with 380 and Franchitti with 370 points. IndyCar awards 50 points to the winner of each race, 40 points for second and 35 for third with points declining on a sliding scale all the way down the field, non-finishers included. 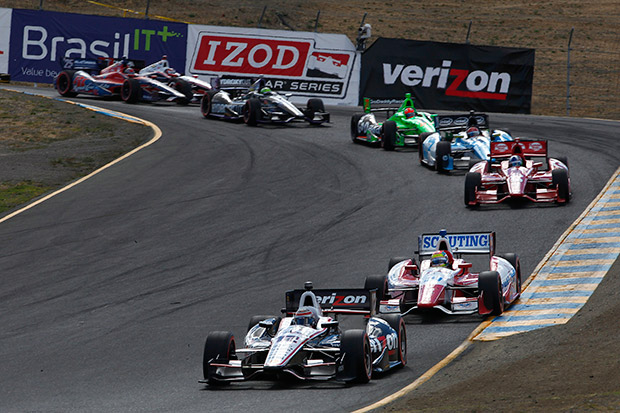 So Dixon’s task in trying to overhaul the consistent but not particularly quick Castroneves is by no means impossible. But it will be a much harder job than it appeared to be prior to his controversial penalty at Sonoma last weekend.

Click here for more on IndyCar from Gordon Kirby