The huge crowd stood as one. Never before had two drivers battling for the lead of an Indianapolis 500 made their final pitstops simultaneously.

Onboard air-jacks plugged in – these also locked the brakes to ease the changing of wheels – well-practised crews leapt into action.

Yet Rodger Ward’s Leader Card squad – owned by serious-minded and race-proven Bob Wilke, a paper baron from Milwaukee, and overseen by ace car-builder AJ ‘The Head’ Watson – edged them by a couple of seconds to grab 200ft over Jim Rathmann’s sister Watson-Offenhauser, looking especially fine on their tall tyres, as they rejoined the track.

On that occasion they had diced for the first 40 laps or so – a battle between friends and trusted rivals spiced by controversy as to who would drive what and for whom (Ward got the Leader Card gig and Rathmann stuck with Lindsey Hopkins’ team) – before Ward asserted his supremacy to lead the last 115.

The Kansas-born ‘Californian’ was confident of doubling up in 1960 and appeared to have a straightaway/chute advantage over the LA-born ‘Floridian’ Rathmann. 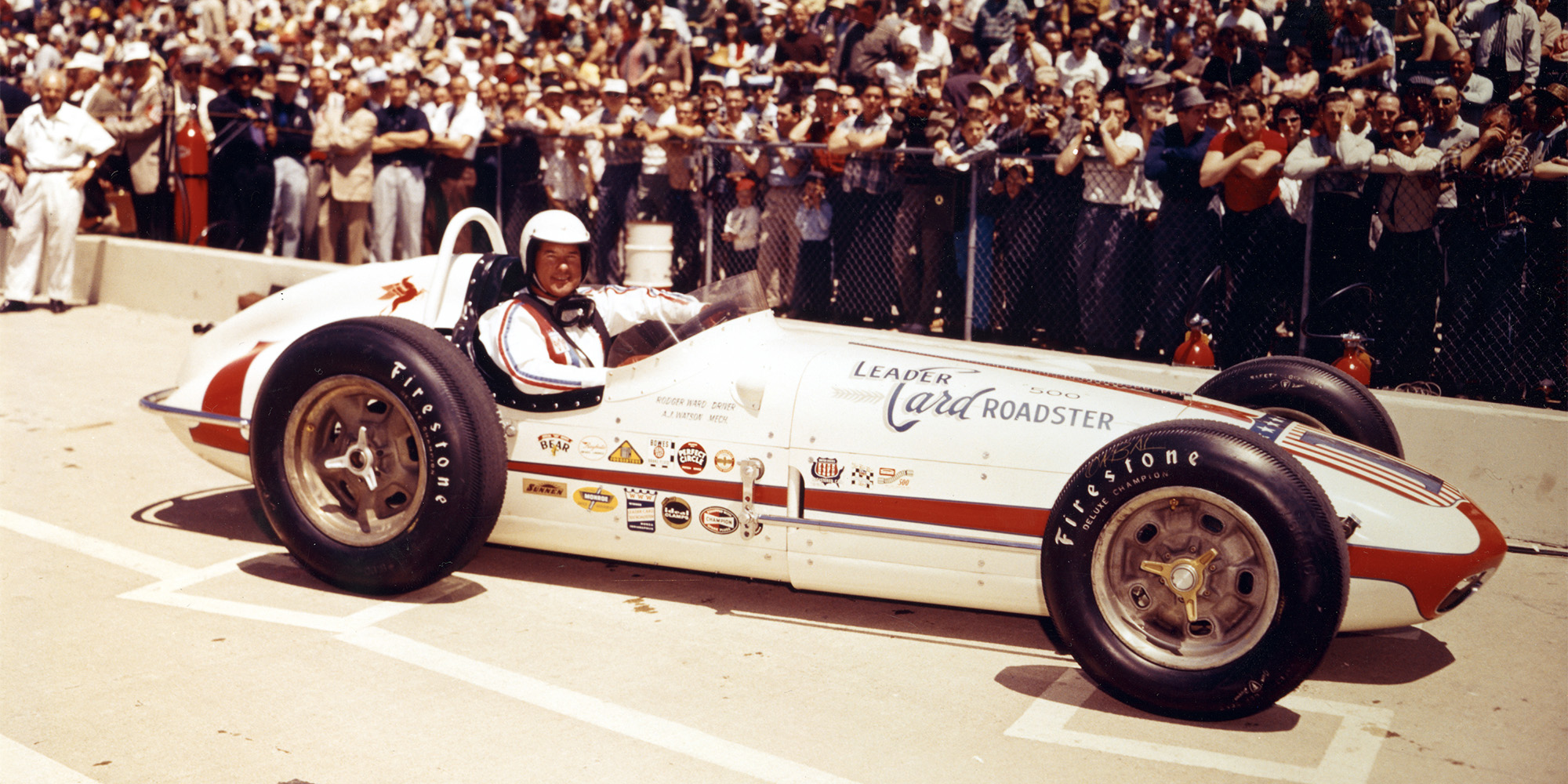 Ward: 1959 winner was looking to double up

Tyre life was critical, too – an Indy roadster scaled 3000lb ready to go – and Ward was Firestone’s go-to tester.

But Rathmann was determined not to finish second a fourth time – he had been runner-up in 1952 and 1957, as well as 1959 – and also was renowned for digging deeper when wheel-to-wheel. (According to former chief mechanic Jack Beckley, he could sometimes be “snake-bit” in single-car qualifying.)

The huge crowd would remain standing to the end.

It had been fraught from the start, in truth – once, that is, the front-row men had fought through race-morning’s gridlock: pole-sitter Eddie Sachs arrived in Gasoline Alley wedged in a sidecar, wife perched on his lap; Rathmann walked from his hotel; and Ward abandoned his road car, jogged to the gate and hitched a lift in a funeral home’s ambulance.

It would be the latter who dived from outside to in to lead through Turn One, only for ‘The Clown Prince’ Sachs – his Watson ‘copy’ built by Wayne ‘Fat Boy’ Ewing and run by Clint Brawner for California transit/trucking magnate Al Dean – to draft by on the second lap: the first of 29 ‘official’ swaps of lead.

By the time Rathmann hit the front for the first time, on lap 25, 1952 winner Troy Ruttman’s older Watson had also led.

The pace was hot – too hot for some: Sachs and Ruttman would retire within two laps of each other, the former with a fried magneto on lap 132, the latter with an overcooked gearbox on lap 134.

But the race had by then already boiled down to Rathmann versus Ward – with Johnny Thomson, ‘The Flying Scot’ of Lowell, Massachusetts, ghosting up on the outside.

Lapping as quickly in traffic as they had in qualifying, the top two continued to duke it out while keeping a bead on their wearing tyres

The latter’s car was one of 11 ‘laydowns’ to take the start. Rather than merely cant its 4.2-litre four-banger, designer Lujie Lesovsky – one of the few roadster builders who was also a draughtsman – tipped his on its side.

Rival Watson saw no reason for such excess, stating that his preferred weight distribution could be jacked into position with engine stubbornly upright. He also sat his drivers to the right of the drivetrain, whereas Thomson was slung to the left.

Laydowns had won in 1957 and 1958, but now only Thomson’s, run for the Racing Associates team by Hubert ‘Herbie Horsepower’ Porter and Robert ‘Rocky’ Philipp, could hold a candle to the Watsons; their delaying a second stop had seen Thomson, pole-sitter in 1959, lead from laps 86-95.

It was an intervention skewing the carefully laid plans of others.

Ward’s early reputation had been punk-kid swagger, with little to show. He changed radically after his part in the chain-reaction accident that claimed the life of the incomparable Bill Vukovich in 1955. Smartening act and appearance, Ward would become both the presentable face of his sport and the wily old hand whom AJ Foyt feared most on pave and dirt. He was savvy, quick and consistent.

So it came as a shock to all when he stalled at his first pit stop, concentration broken when his least experienced crewman aced a tyre change. Ward would spend the next 80 laps regaining those 30 seconds lost.

Rathmann was smart, too, and refused to panic when Ward roared by to retake the lead on lap 123.

The younger of the Rathmanns had been competing since borrowing brother James’ driving licence – that’s how Richard forever became Jim, and James became Dick – as a 16-year-old. His preference was for pave and a burgeoning business took preference over full campaigns.

He was regularly in the mix at Indy, though – no matter where he qualified – and had/would never stick it in the wall. An opponent most dogged.

Ward’s hope of a breakaway faded quickly and he tucked in behind in order to ratchet pressure. Rathmann’s habit of knocking it back a notch when leading, however, complicated the situation when allied with the looming Thomson.

The remaining 15 changes of lead would be between two men running increasingly faster than they and their Firestones wanted to. 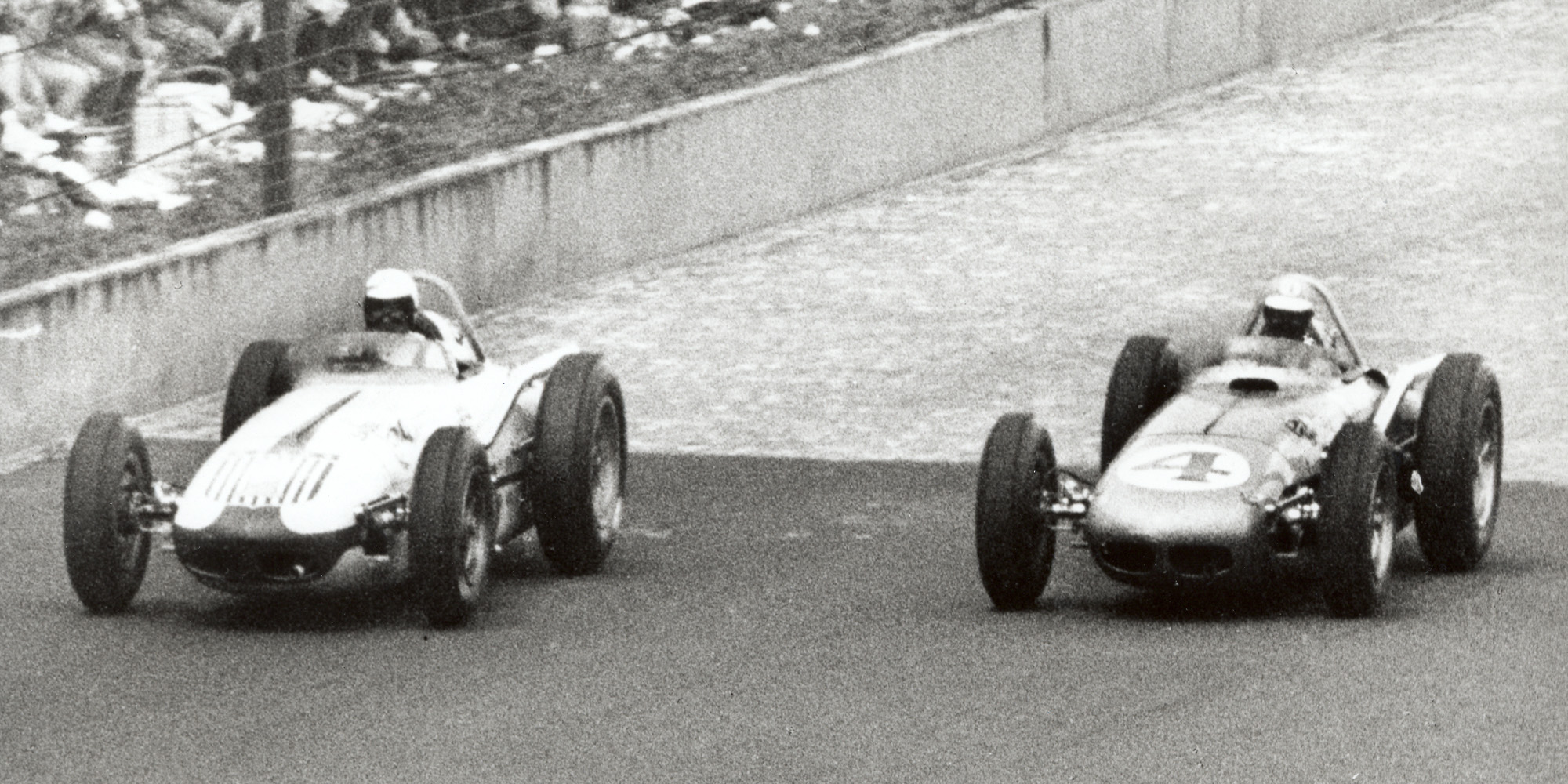 Rathmann drove ever more deeply into Turns 1 and 3 on his final set of fresh rubber – both crews had deemed the unloaded left-fronts okay to continue – so as to compromise the potentially faster Ward. And all the while Thomson was closing; he would be within 9sec with fewer than 30 laps to go when his Offy spat an exhaust valve.

Now lapping as quickly in traffic as they had in qualifying, the top two continued to duke it out while keeping a bead on their wearing tyres’ warning orange breaker strips. They indicated two maybe three laps left. Tops.

Ward’s was the first to show: the right-front on lap 197. Had he not won in 1959 he might have kept his foot in. But Ward 2.0, seven years older at 39 than the prematurely balding Rathmann, took the measured view and backed off. 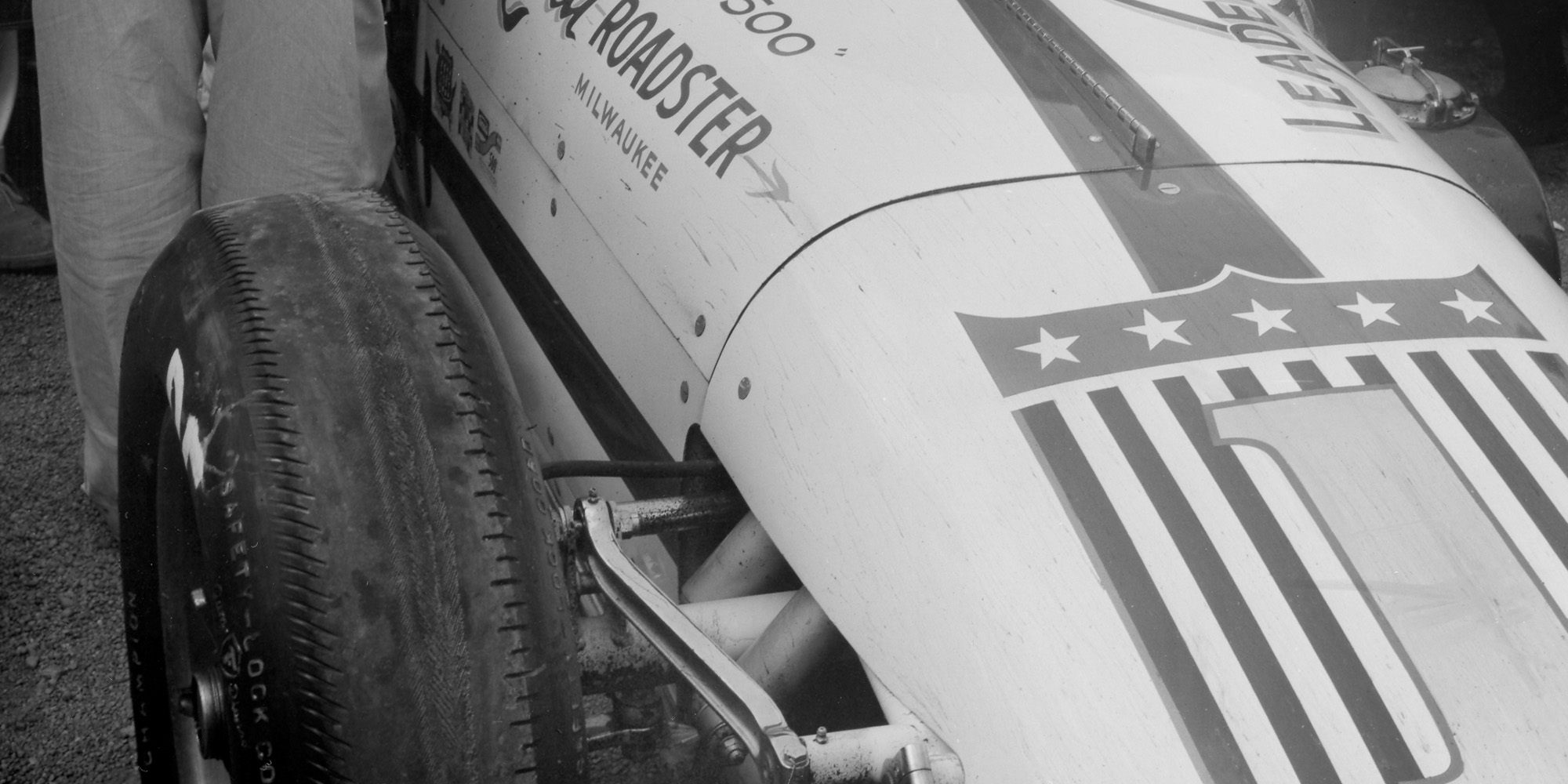 And so it was Rathmann, a man with more reason to take a risk on the day, who swung into Victory Lane. His right-rear was shot, its strip having popped to the surface the lap after Ward’s.

His win marked not the end of an era – a roadster would prevail as late as 1964 – but the beginning of its end: the field of the last Indy 500 to count towards the Formula 1 World Championship was the last to be all front-engined and powered entirely by the wailing Offy. 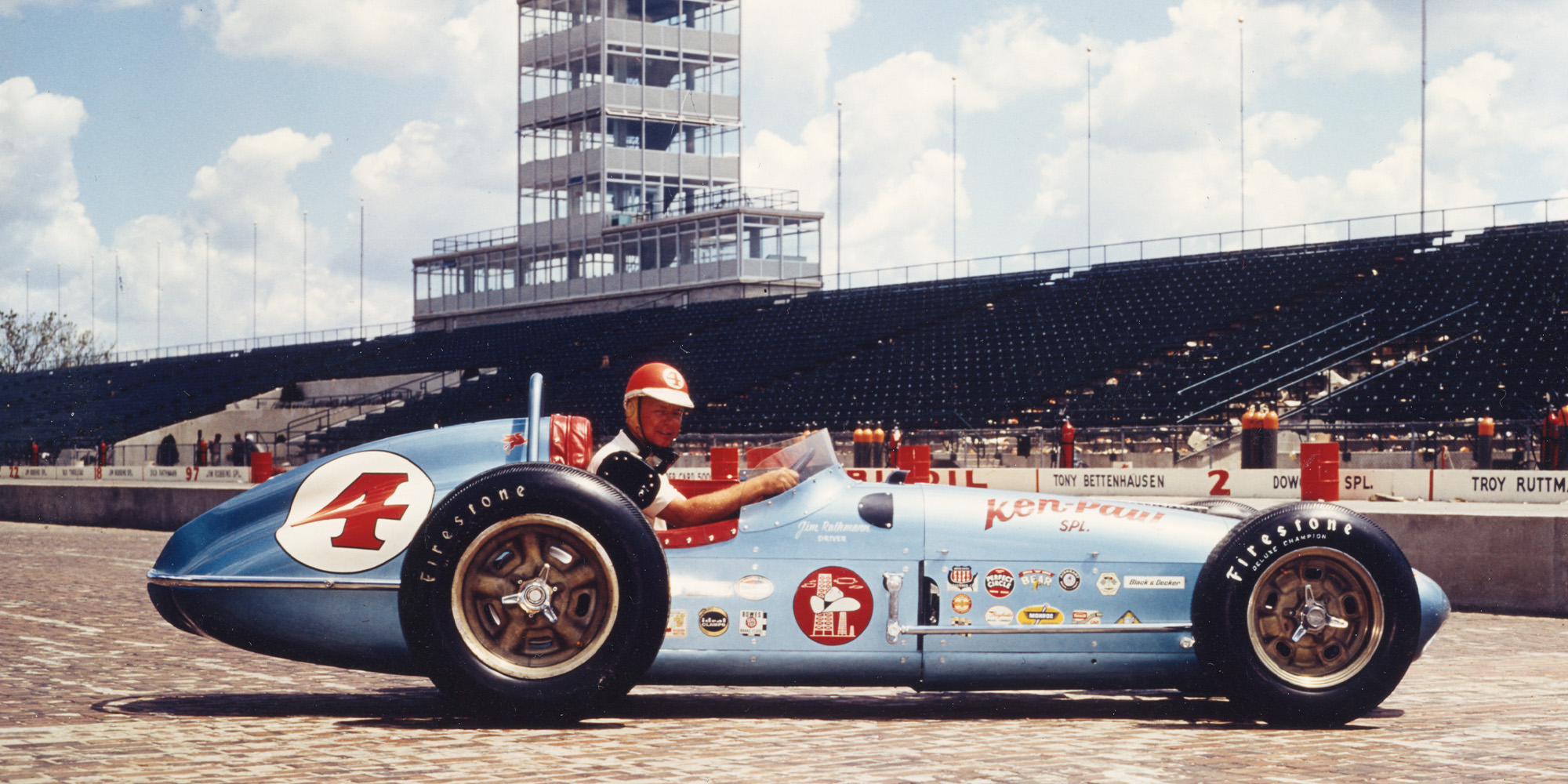 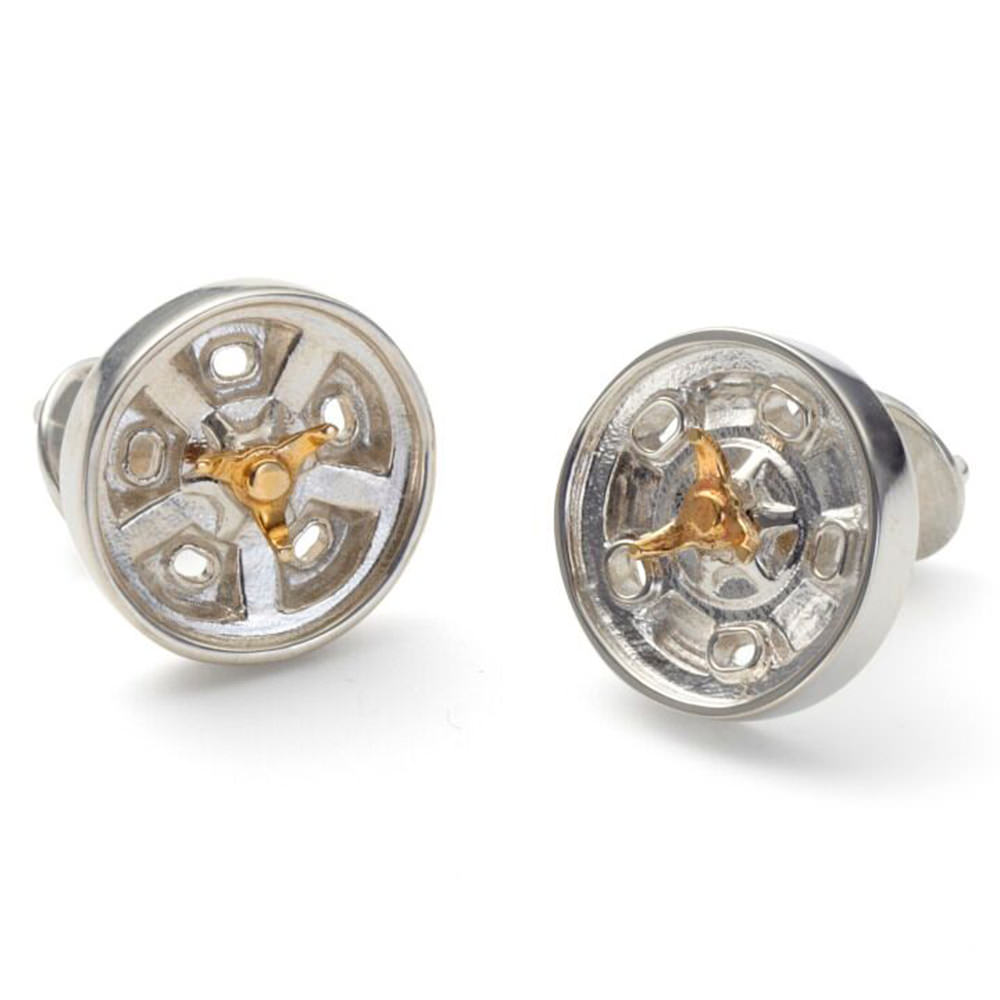