It’s difficult to measure Alexander Rossi’s remarkable achievement in winning the Indy 500 on his first try. He certainly benefitted from the advice of co-team owners Michael Andretti and Bryan Herta. Both are very experienced, smart racers, and it was Herta’s sharp tactical thinking that brought Rossi his win at the Speedway.

Rossi was as fast and smooth through the week of practice and qualifying leading up to the 100th running of the 500 as he has been in all of this year’s IndyCar races. He qualified a very respectable 11th and ran well during the race in the forward part of the long snaking line of cars of midfield. With everyone running flat-out all the way ‘round the giant four-cornered speedway, passing was difficult and through the opening stages most drivers could do little more than hold station. 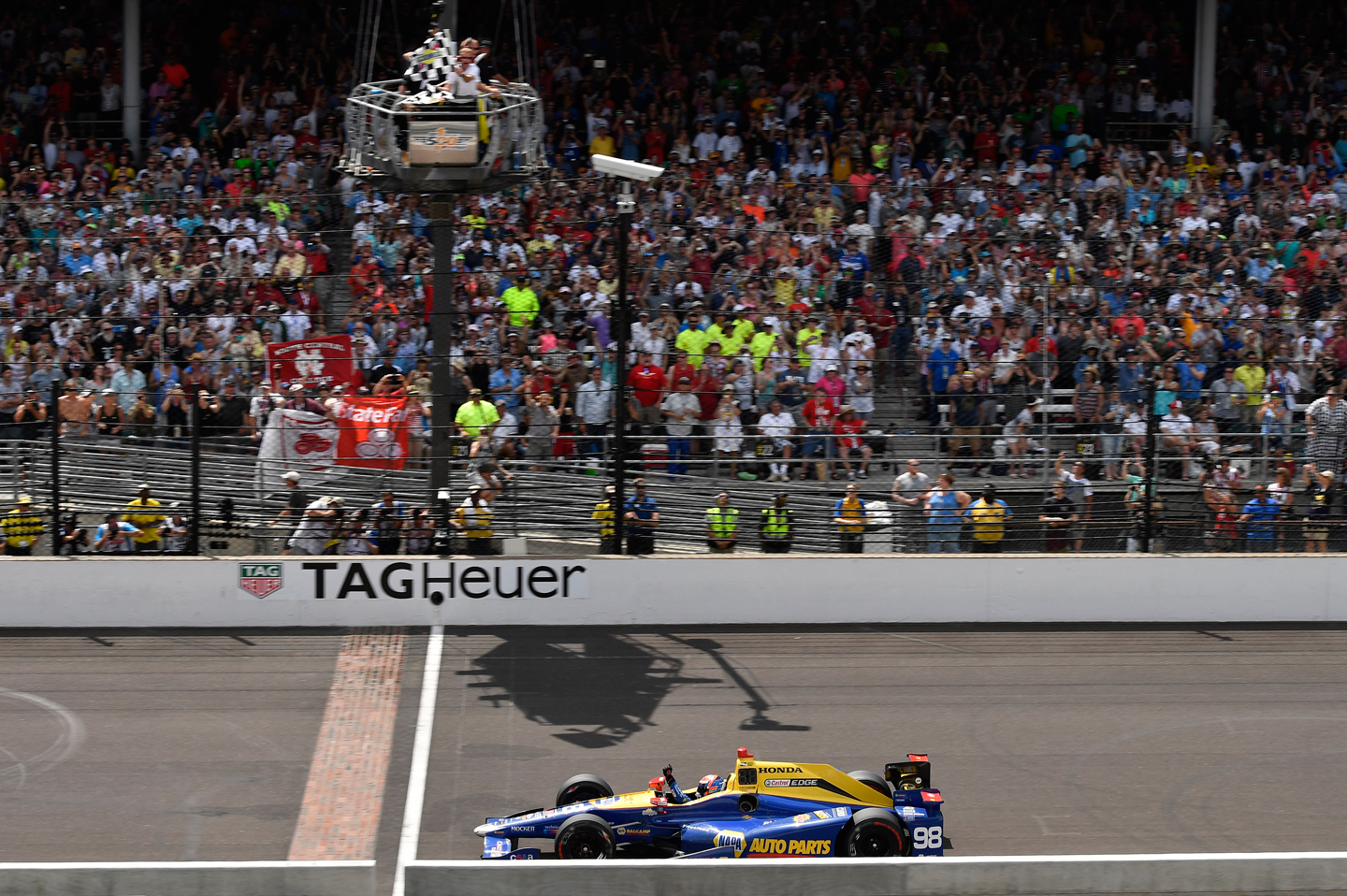 At the front, however, James Hinchcliffe and Ryan Hunter-Reay put on a great show, drafting each other and exchanging the lead lap after lap through the first round of pitstops. As the race wore on they were joined by Townsend Bell, Josef Newgarden, Tony Kanaan, Carlos Munoz and Hélio Castroneves – the result was entirely unpredictable for most of the distance.

But Hunter-Reay was the man to beat. He led 52 laps and was always at the sharp-end of the leading bunch until team-mate Townsend Bell messed up in the pits, crashing into Ryan and damaging both cars. Bell got away with less damage and lost only one lap but Hunter-Reay was two laps down when he resumed.

At the end of the race Hunter-Reay showed his class as Andretti’s team leader by allowing Rossi to run in his draft and make it to the chequered flag. Ryan is a gentleman as well as a fierce racer, some of the spoiled brats in Formula 1 and MotoGP could learn a lot from him.

The race’s final segment witnessed a great battle between Kanaan, Newgarden, Munoz and Hinchcliffe. Kanaan and Newgarden led most of the time but Munoz was also able to get to the front as they ran as hard as possible, knowing they had to stop for quick splashes of fuel in the closing laps. Sure enough, Kanaan stopped with seven laps to go while Newgarden, Munoz and Hinchcliffe came in two laps later.

Rossi was running ninth when the final restart took place with just over 30 laps to go, but he was able to nurse his car to the finish without stopping. He found himself with half a lap’s lead and to make the finish Rossi had to reduce his pace to a crawl. Coming out of turn four on the last lap, with Hunter-Reay doing all he could to tow his team-mate to the line, Rossi’s car ran dry of fuel. But he was able to coast underneath the chequered flag four seconds ahead of Munoz and Newgarden.

“I have no idea how we pulled that off,” Rossi remarked. “We struggled a little bit on the pit stops but Bryan (Herta) came up with an unbelievable strategy. I can’t believe we’ve done this. Ryan (Hunter-Reay) was unbelievable in helping me get to the finish. He was giving me a tow at the end and it’s an amazing result for Andretti Autosport. I’ll cherish the fact that at one point we were 33rd and we rolled the dice and came through and made it happen.

“We ran out of fuel in turn four on the last lap,” Rossi added. “We were clutching it and coasting down the backstraight. We knew it was going to be tight.”

Munoz was bitterly disappointed that he wasn’t given the option of playing the fuel-saving game: “I knew I had the car to win in the first half of the race. I was just holding my position. The last part of the race I was pushing really hard, overtaking everyone. I think me and Newgarden had the win. We were so strong.

“I knew I didn’t have enough fuel. I don’t know how my team-mate did it without stopping, I want to know what he did.  I’m happy for the team, a one and two for Andretti and one and two for Honda but I cannot say I’m happy. I’m just really sad and disappointed.”

Newgarden was equally downbeat: “It’s really heartbreaking because I think we had the car to win. I’m not saying we should have won the race because we had the best car, I just think we had a car that could have won. When you know you’ve got a car to win, you’ve got to go flat out and try to win the thing as you would without trying to play the fuel game.

“It just sucks that we didn’t have a shoot-out at the end where we could have raced each other,” he added. “I would have been on the high side, trying to win this thing. I think that would have been a lot cooler, but it didn’t work out.”

Nor did the 100th Indy 500 work out for last year’s winners, Team Penske. Juan Pablo Montoya started in the midfield and made little or no progress before his tail-happy car got away from him and he crashed after only 63 laps. He was classified in 33rd and last place. 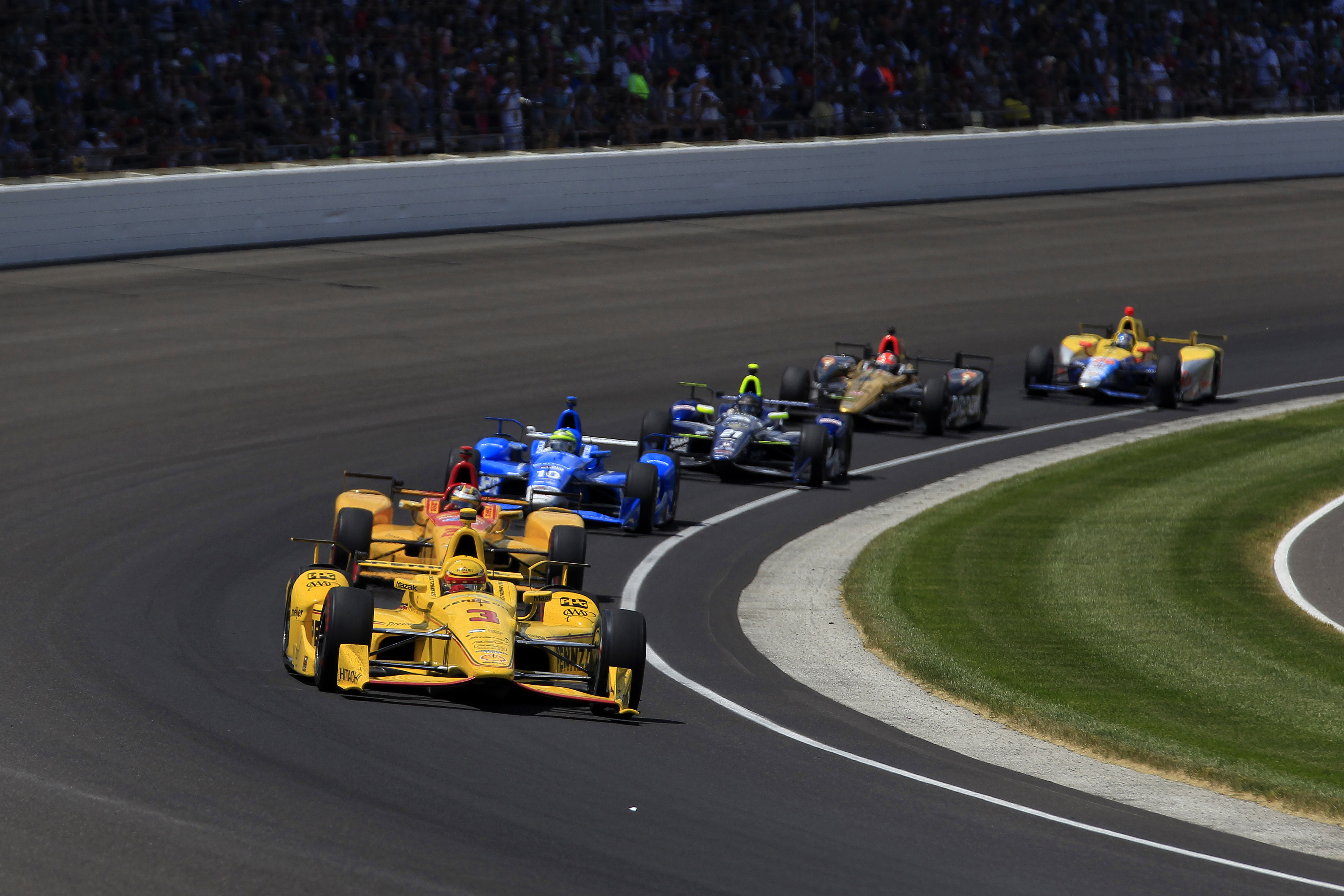 Team-mates Castroneves, Simon Pagenaud and Will Power were equally luckless. Castroneves worked his way to the front and led 24 laps in the middle of the race but his car’s rear pod was broken in a close-quarters racing collision with JR Hildebrand. Repairs were required in the pits and he fell down the restart line, eventually finishing 11th immediately behind team-mate Power. Championship leader Pagenaud looked good in the early stages but ran into two pit penalties before his engine began to misfire. He made the finish, one lap down in 19th place.

Chip Ganassi’s team also had a subdued result. Tony Kanaan was Ganassi’s strongest card running in the first three most of the way and leading 19 laps. Kanaan finished fourth ahead of team-mate Charlie Kimball while defending IndyCar champion Scott Dixon was never able to lead a lap and came home a disappointed eighth.

Pole winner James Hinchcliffe fell to seventh at the finish, fighting a loose car in the closing stages. It was a disappointing end to a tremendous month of May for Hinchcliffe, backing up his pole position by running at the front most of the way and leading the race 11 times for 27 laps, second only to Hunter-Reay.

So the 100th Indy 500 turned out to be a great day for Alexander Rossi, Michael Andretti and Bryan Herta. Rossi won $2.5 million and second-placed Munoz took home $788,743 providing a good pay day and needed boost for Andretti Autosport. Sponsorship is hard to find in IndyCar these days and Andretti and Herta have been working overtime in recent years to keep their teams in business. Bryan merged with Michael this year and they were able to sell sponsorship to NAPA for Rossi for the 500. Obviously, they hope Rossi’s win will help expand NAPA’s support.

Michael also deserves a tip of the hat for the effort he puts into fielding teams in each of IndyCar’s Mazda Road to Indy ladder series – Indy Lights, Pro Mazda and F2000. He’s the only IndyCar team owner to make such a complete commitment. It surely would be a good thing if some of the other leading team owners would follow Michael’s example.

Meanwhile, Rossi is currently sixth in IndyCar points behind Pagenaud, Dixon, Castroneves, Newgarden and Hinchcliffe. Next weekend IndyCar will run a pair of races, one on Saturday, the other on Sunday at Detroit’s tight, bumpy Belle Isle street circuit. The following Saturday night they will run a 360-mile race under the lights on the high-banked Texas Motor Speedway. It will be interesting to see if Rossi can make a mark in these and other races over the summer and disprove those who believe his win at Indianapolis was a lucky occasion, unlikely to be repeated. 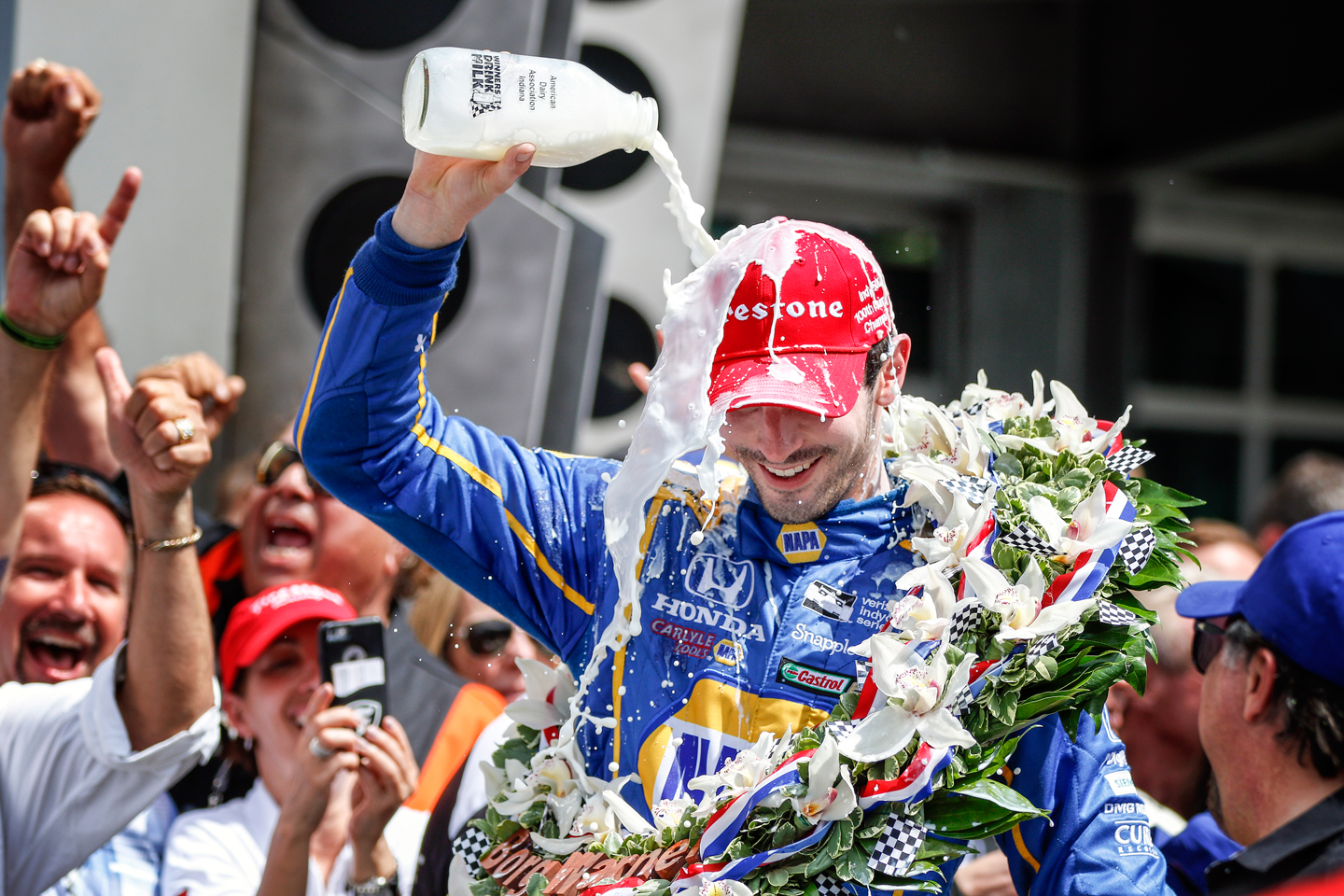