The year was 1986. Porsche was powering McLaren to the Formula 1 World Championship; the mighty 962 would win that year’s Le Mans 24 Hours for the sixth time in a row and it was racking up wins on the other side of the Atlantic too: victorious at Daytona, Sebring and Road America.

No wonder Porsche decided that it would go ahead and conquer IndyCar as well.

With understandable confidence, or hubris, Porsche declined to follow the rest of the grid and buy in a March or Lola chassis. Instead, it began Project 2708: building its own chassis and engine as part of a concept described as “Pure Porsche”.

Success would have meant becoming the first manufacturer to win the Indy 500 with a factory car since Maserati in 1940.

Despite the scale of the ambition, rivals were wary of German engineering’s impact on IndyCar. With good reason according to former F1 driver and Le Mans winner Jochen Mass who tested the Porsche.

”It would have been a bloody good car,” he told Motor Sport in our current podcast series.

But Project 2708, named after its 2.65-litre V8 engine, completed just six racing laps before it was abandoned, with little-disguised amusement from the US fraternity.

There had been setbacks but Porsche hadn’t aimed too high, says Mass, who believes that the IndyCar would have been competitive if it wasn’t for internal politics.

Mass says that they came to a head when the car failed to qualify for its second race, after suspiciously slow laps from its driver who was opposed to the direction of the project.

Jochen Mass spent a decade with Porsche, hurling Group C cars around the Nürburgring, winning races across Europe and driving alongside other sports car greats. In the first podcast of our new series, he reveals Porsche's winning formula

It proved to be the end of the “Pure Porsche” concept.

The ingredients for success had been there. Project 2708 was led by the legendary engineer Norbert Singer, who was keen to test his Le Mans-winning sports car expertise in a single-seater.

With an engine from Hans Mezger, whose TAG creation was so successful in F1, it was a Porsche dream team.

Over two years, the car came together; Singer finding some elements of the project similar to sports cars, with others (chassis and aerodynamics) a new challenge.

Mezger repurposed the V6 turbo F1 tech to create the turbocharged V8, the bold confidence of the team clear in the huge Porsche lettering stamped on the cylinder head covers. A documentary on the making of the car was even commissioned.

In September 1987, it made its first run on the test track at Porsche’s Weissach development centre.

Mass tested the car at Weissach and then Paul Ricard but that phase didn’t last long. Singer described the next stage of the development programme as a “public test”, otherwise known as racing. Competing in the final races of the 1987 season was meant to hone the machine for the following year.

Al Unser Sr. was recruited to shake the car down at Portland Raceway and it then went on to Laguna Seca for its race debut on October 11, in the green livery of its Quaker State oil partner.

IndyCar official Dale LaFollette tells the Porsche documentary video crew that rivals would have had “fear in their hearts” if the team had arrived with its engine in a March or Lola chassis, going on to describe the all-new Porsche as a “very brave move”.

Unser Sr. said the same in quite different language, complaining of handling difficulties and scraping onto the grid in 21st. The race was little better, ending on lap seven with water pump failure.

There were already signs of disagreement behind the scenes: Al Holbert, director of Porsche Motorsports, North America, hinted that a Pure Porsche car was less important than winning. “It makes you stop and think why do you race?” Holbert said after the race. “When you are accustomed to winning and being successful fairly quickly, you really have to scratch your head and say why do you do it? What was the goal up front and I cannot underplay the competitiveness. We really like to be competitive on the racetrack.”

Soon afterwards, Unser Sr. quit the team ahead of the final race in Tamiami, Florida, leaving a vacancy for someone who knew the car.

“I was offered by Porsche to run the car in Tamiami and of course I couldn’t do it because you need a fortnight to do your rookie test,” Mass told Motor Sport.

“I knew that and I knew I wasn’t allowed to do it and I regretted it because I really wanted to race in the States then.”

The task fell to Holbert, the son of a Porsche dealer; a three-time Le Mans winner with Porsche and five-time IMSA champion — twice with Porsche. He had persuaded the company to invest in the IndyCar project, and was running the car. Nobody was more dedicated to the success of the 2708. Or so it seemed.

“He was, let’s say, a very manipulative character,” says Mass. “A pity but he was other than that a very good driver.”

According to Mass, Holbert had lost faith in the Porsche chassis and wanted the company to pursue a more conventional route. In qualifying at Tamiami Park, he fell short and failed to make the race.

“I watched him drive the car and he drove deliberately slow, that’s what I could see from the outside,” said Mass. “I told Singer [it was] because he wanted a different chassis. 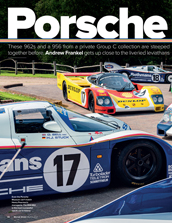 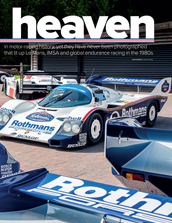 This was a little like digging priceless historical artefacts out of a field. First one emerged, a dream all by itself, more than I could have hoped for, beautiful,…

“He wanted a Dallara or a March or Lola, I can’t remember but he didn’t want the Porsche chassis.”

With the results its first two race meetings present in their minds, Porsche engineers took the decision to fit their engine to a March 88 chassis for the 1988 season.

Mass was hopeful for a drive after positive noises from Holbert, but it wasn’t to be.

“We didn’t get on,” said Mass. “[Holbert] never told me a straight thing in the eye, he just circumvented it.

“November, December, January I waited. I got hold of him again. He said, ‘Jochen, I’m glad you called me’. He said ‘I’ve just signed Teo Fabi yesterday’, this sort of thing. I said you’re such a **** Honestly, it was so annoying.”

And so the 1988 season brought the arrival of Fabi in a Porsche-engined March 88; the Porsche chassis 2708 sidelined — wrongly, according to Mass.

“In the beginning it was a bit tricky,” he said. “There was too much friction under load so it didn’t work freely enough. They put in needle bearings into the necessary connections and then it became better and better.

“At the end the car was very good and at Weissach it was quicker than Niki [Lauda’s] Formula 1 car.

“I thought that car would have deserved to run in Indy because it would have been a bloody good car but politics stopped it. That was really a pity.”

Porsche would win with a March 89 chassis in 1989, Fabi claiming victory in Mid-Ohio, but Holbert was not there to see it, having been killed in a plane crash in September 1988.

The desire for Indy 500 victory remained and the team spotted a loophole in new regulations for 1990, which should have seen it on the front foot. Working with March, it developed the first all-carbon fibre IndyCar chassis, which rivals had thought was not permitted until 1991.

Unfortunately, it was those rivals that made up CART’s decision-making board. And when asked to adjudicate on this grey area, ruled against Porsche in what many saw as a political decision.

At the end of a winless season in a hastily redesigned car, the Porsche IndyCar project was wound up for good.