After a moving opening ceremony that preceded the race in support of Bubba Wallace, a rain delay and frenetic action for almost every one of the 191 laps, Ryan Blaney somehow held off the field to take his second win at Talladega Superspeedway.

Following the shocking discovery on Sunday of a noose in the garage stall of Wallace, NASCAR’s only African-American driver, the field came together with the no43 driver in a touching display of solidarity.

Wallace’s car was pushed to the front of pit road with the entire field of drivers and crew members in tow. The drivers circled round him for the pre-race ceremony and posed for a powerful photo later posted by Wallace on social media.

Following the chequered flag, an emotional Wallace said that it was a significant day for NASCAR as he stood in front of the grandstand and fans cheering in support of the no43 driver.

“The sport is changing. The deal that happened yesterday, sorry I’m not wearing my mask but I wanted to show whoever it was that you’re not going to take away my smile. I’m going to keep on going. I’ve been a part of this sport for a really long time.

“All in all, we won today. The pre-race deal was probably one of the hardest things I’ve ever had to witness in my life, from all the supporters, from drivers and crew members and everybody here. It’s truly incredible, and I’m proud to be a part of this sport.”

Once the racing did commence, it was frantic. The looming threat of rain materialised just before an hour into the race, resulting in a red flag and delay, but the resumption for Stage 2 carried on from where the action had paused.

Though there was no ‘Big One’ to speak of, Chase Elliott was the major name caught out in the draft. A big push from Brad Keselowski behind was met with a stiff block by Joey Logano ahead, and the no9 broke into a spin in avoidance.

Somehow the spinning Hendrick Motorsports car collected just one other in the no3 of Austin Dillon, as the field scattered to avoid the sideways Chevrolet.

With Ford taking eight of the preceding nine races at Talladega and Ryan Blaney winning the previous race at the Superspeedway, it was no surprise to see the no12 Team Penske car in contention to win coming into an overtime finish.

Kevin Harvick led the field onto the final lap but could not hold off his rivals behind. Ricky Stenhouse Jr, Erik Jones and Blaney all swept by coming into the tri-oval.

As the no12 threw an aggressive block to hold Jones off behind, it resulted in a sideways moment for the Joe Gibbs Racing driver, who tagged the wall coming to the line. 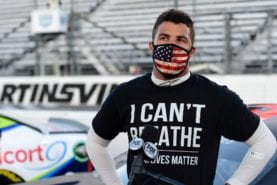 Bubba Wallace has said that he will continue to stand for what he believes in after a noose was found in his garage at this weekend's NASCAR meeting at Talladega.…

The check-up in momentum allowed Stenhouse Jr to seize the momentum and charge alongside Blaney, spinning Aric Almirola out of the way in the process. The no10 finished third albeit backwards as Blaney held onto the win by just 0.007sec at the line.

“I just kind of blocked, just trying to block the best we could,” Blaney said. “Block the top, block the bottom. The 20 (Jones) got to my outside, and I tried to go up there to slow him down and, I’m not sure, I don’t know, three-wide. I hate that I hit him, but just kind of trying to beat and bang to the line and things like that.

“We just edged it out, but I’m really proud of this whole team. It’s been a cool year so far, and I’m really excited to get our first win of the year at a cool place. Thank you everybody for coming… That was a lot of fun.”