Seven-time NASCAR champion Jimmie Johnson has emerged as one of the greatest, most complete racing drivers of the modern era. His seventh championship has tied him with NASCAR legends Richard Petty and Dale Earnhardt and there’s every chance that he may win an eighth title in the coming years and emerge in a class of his own.

For those who doubt the challenges of NASCAR and oval tracks I offer this week some discussion from Johnson, four-time champion Jeff Gordon, three-time champion Tony Stewart and three-time IndyCar champion Dario Franchitti. 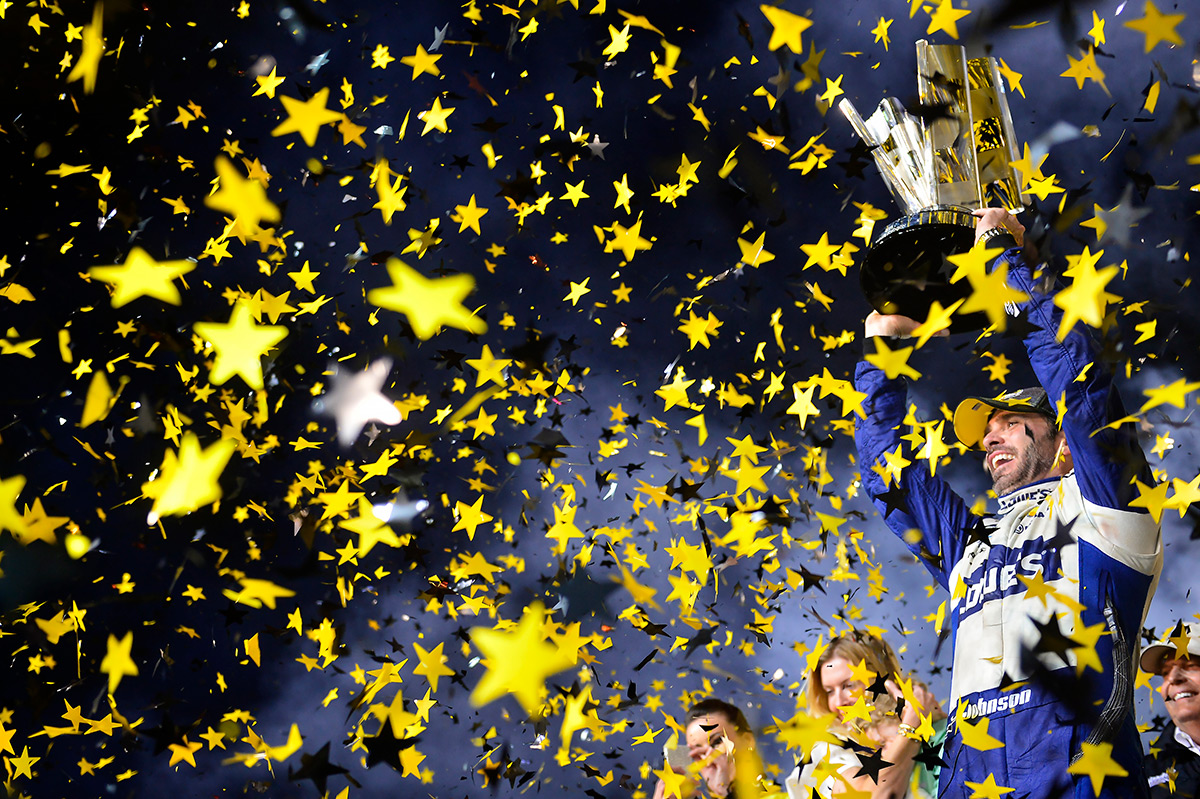 “I love F1 and all the technology. I love the concept of building the fastest vehicle, but that’s not what NASCAR is. Our sanctioning body wants to put on an entertaining event. So they want to keep technology out. They intentionally want the cars to drive poorly in order to put on a better show. Everything in NASCAR is aimed at putting on a good show for the fans.

“By design NASCAR tries to limit what we do. But we use every tool that F1 teams have to make our cars perform better within the limitations that we’re allowed. Although we can’t run data on the cars on race weekends, we collect data at every point in time we can otherwise. We have simulation programs, seven-poster rigs, wind tunnels, rolling road wind tunnels and CFD models. We use everything Formula 1 does but you can’t connect the two worlds.

“In NASCAR, the driver ends up being the computer. It’s my job when we come to the track to go racing to validate all of the virtual testing that we do during the week. One thing I am very proud of is the human element in our sport. You really have two different worlds, the virtual world of modern technology and the limited use of all that stuff at the races. I’m the one that has to flow between those two spaces and help Chad [Knaus, crew chief] and the team point it all in the right direction.

“The biggest reason for the change in performance of the car during a given fuel run is that our fuel cell is mounted at the back of the car so the weight changes dramatically over the course of a run. In order to keep the car turning sharp enough at the end of a run with no fuel in the car, you’ve got to start uncomfortably loose, or with a lot of oversteer in the car. You’ve got to manage that so the car is good at the end of the run once you’ve burned off 18 gallons of fuel, weighing more than 300 pounds. So there are a lot of compromises from the driver’s seat in trying to manage a NASCAR race car.” 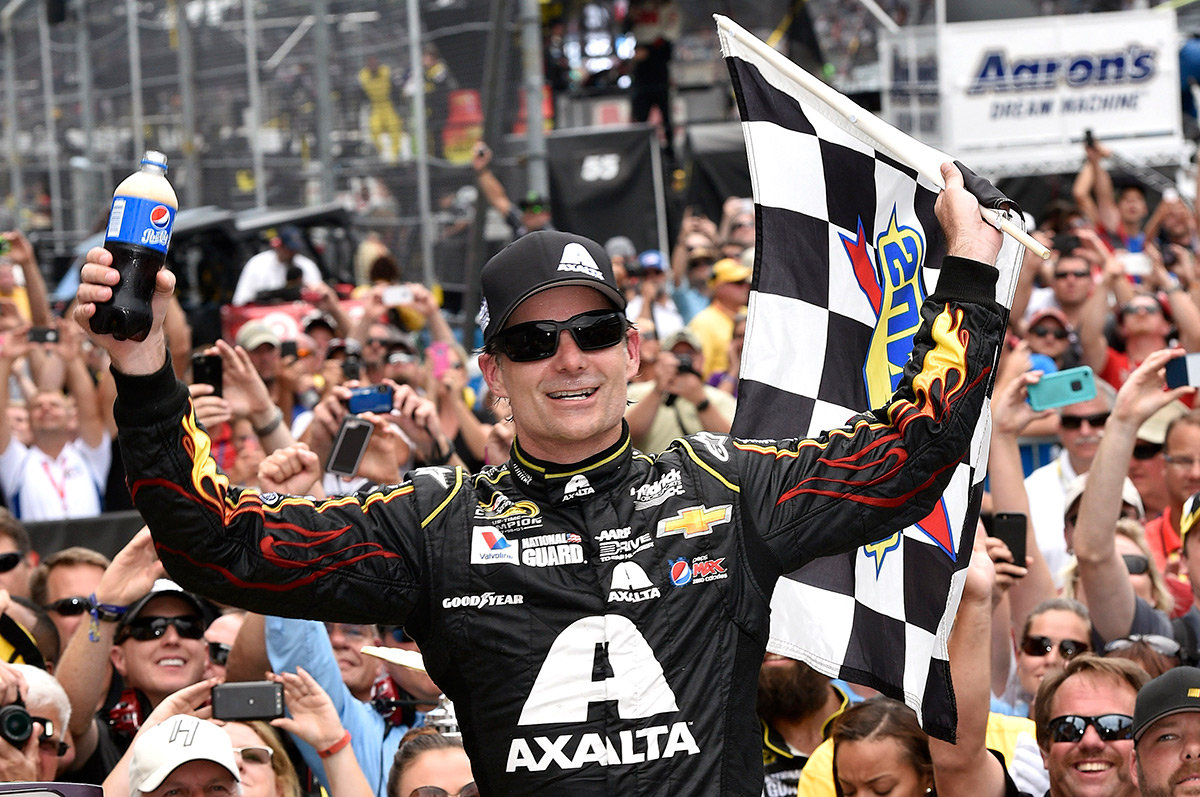 “Because of the rules that NASCAR puts on us it makes it very challenging. If we had wide-open rules it would be fun and fairly easy to fix some of our problems but that’s not the way NASCAR wants it. NASCAR creates the rules based on a stock body and chassis and with what we have to work with within those rules it’s a pretty impressive race car. When you look at the torque of the engine and the power that it makes, it’s a very impressive race car.

“I think a lot of people who are unfamiliar with ovals have a hard time grasping it because it seems so simple. But it creates a lot of challenges when you consider the speeds that we’re carrying at all the different types of ovals that we race at and the lack of grip and downforce that we have.

“Battling with those challenges at the speeds we’re carrying with the lack of grip we have takes plenty of work. The cars really weren’t designed to go the speeds that we’re taking them yet we’re doing amazing things with them.

“I believe every race car when you push it to its limit it’s always going to have areas of uncertainty or instability. But I think with our cars there’s a lot of that! It’s just something you have to adapt to and get used to. But that doesn’t stop me from asking my crew chief and our engineers to try to make it better and certainly, each year, we do improve the car.

“I’ve driven a lot of different race cars and I think that a stock car at a place like Bristol is one of the most difficult. At Bristol and Charlotte, places where the corners are really fast, you’re working the steering wheel a lot more than normal so there is the physical side of it. But at most tracks it’s not really a physical challenge.

“An F1 car is the ultimate. I had just a very short experience driving an F1 car one day at Indianapolis and it was the most incredible experience I ever had in my life. The physical side of those cars is much more demanding. I compare it to a jet pilot in the military. You have to be in incredible physical shape because the car has so much grip and it’s capable of doing more than what the body is capable of.

“Most of what we deal with is just the heat. We have a lot of cooling fans in the cockpit to help with the fatigue part but we’re very restricted in what we can do.

“Most of the racing in NASCAR is mentally demanding because, number one, the competition is extremely fierce and track position these days is so important. But so is every aspect of it – pitstops, pit strategy, driving the car fast and having a fast car, and then again the competition. The field is so deep.” 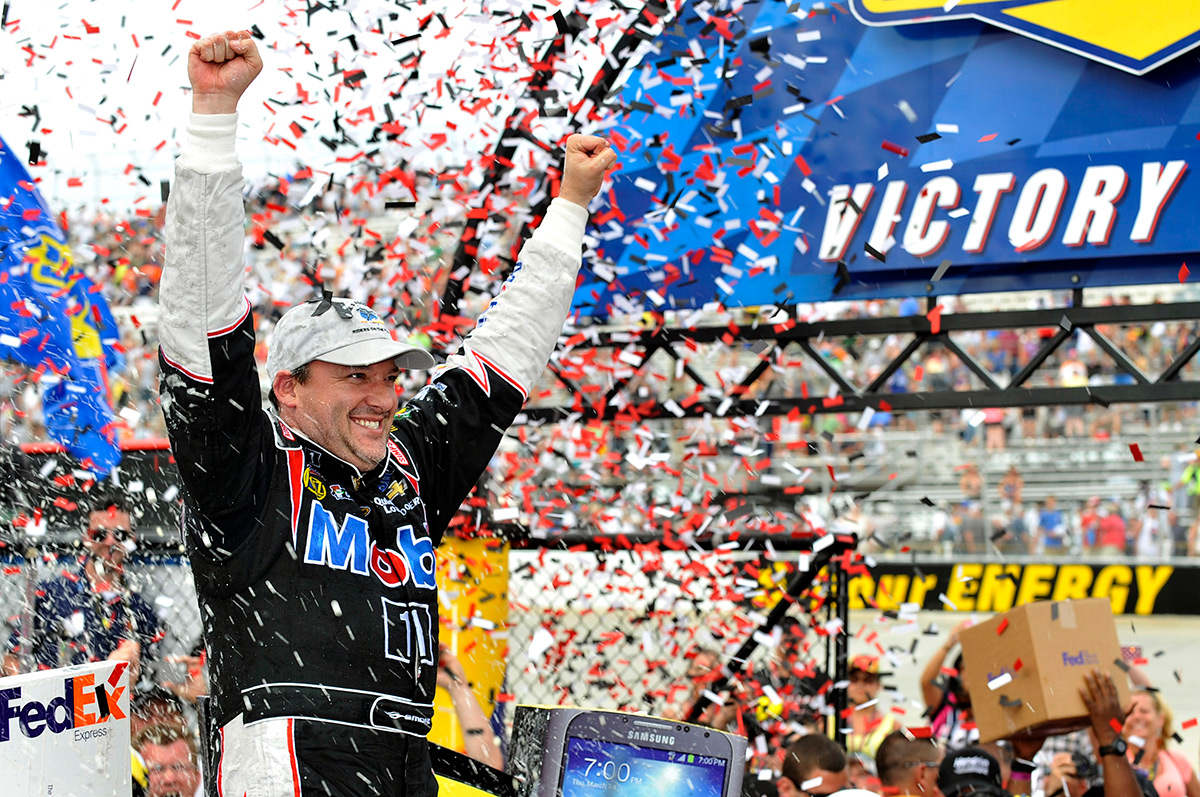 “The best way to explain NASCAR’s remarkable depth of field to race fans? Show them a qualifying sheet from Bristol. When you’ve got 41 or 42 cars qualifying within six-tenths of a second of each other, that’s seriously competitive motor racing. They don’t have more than three or four cars that qualify within six-tenths of a second of each other at an F1 race. Another thing that’s different is you can qualify on the pole for a NASCAR race and run 40th in the race, and vice-versa.

“It’s a much shorter lap. There are two ends of the track that you’ve got to be precise on and that’s the hard part. In F1 or IndyCar racing on a road or street course you can mess a corner up a little bit and lose a tenth but you’ve got 10 more corners to make that time up. Here, if you miss it, you’ve just missed it.

“In NASCAR you have to be so precise every lap and deal with a car that has twice the weight of an F1 car and half the downforce, half the tyre and half the engineering. With a big car like ours when you get around other cars it really disturbs our cars. Two cars running side by side in F1 really doesn’t screw up their downforce, but it does with our cars because they’re so big and because of the side force they make. It’s a very, very fine line of balance.

“In F1 there are four or five teams every weekend that have a realistic shot of winning the race. You come to a Cup race and there are 15 to 18. If you’re off a little bit, you‘re off a lot because the times are so close. If you took an F1 track and put two ends on it, their times would be just as close as we are.

“We don’t pull the gs that an F1 car does, but in the middle of the summer when it’s hot we’re sitting inside a 130-135 degree car for three or four hours at a time.” 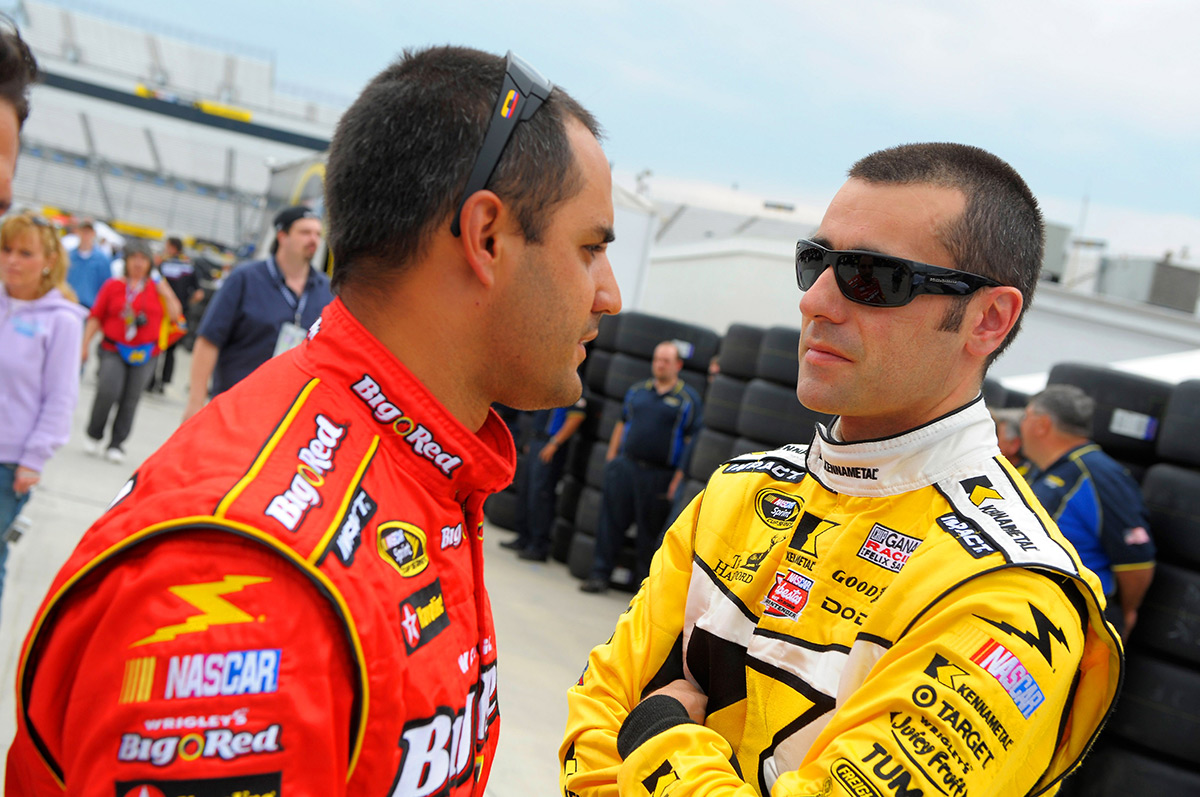 “There were so many lessons to learn. What I found difficult to get used to was the feeling of the car sliding around. With an Indy car I’m used to quite quick movements – short and smaller movements. If you get sideways with a stock car, you’re in the fence. You’ve got to get used to that and it seems from talking to the team and talking to Juan, and to other drivers like Tony Stewart, that everybody goes through it when they first go to NASCAR.

“I think a lot of my success in the Indy car was being able to get the set-up exactly the way I wanted it. I could work with my engineer to tweak it to really get it to where I needed it to be, and you could adjust that throughout the run with the tools you had inside the car.

“In NASCAR, you’re never going to have a perfect car, so you’re going to have to get used to driving it with a degree of looseness, or it’s a bit tight. That’s one of the lessons, too, and then you go next weekend to a different track and it’s a whole different bunch of lessons. When you get sideways there’s another thing to get used to: sideforce.

“There’s the weight of a NASCAR car and the tyre is so bloody small that it’s under a hell of a lot of stress so the tyres degrade pretty badly. You’re stressing the tyres so much more in NASCAR and

you have to get used to how you have to set the car up to be loose at the start of a run and drive through that looseness so it doesn’t push like a pig at the end.

“Physically, the cars are very hot. With the Indy car you had to work-out four or five days a week, at least I did anyway. A NASCAR car is a lot easier physically, but oh my God does the heat get to you! That’s very difficult. It’s just something you have to get used to.

So NASCAR is no walk in the park. Without doubt multiple Sprint Cup champions Johnson, Gordon and Stewart are as accomplished as any great racing driver of modern times.