On lap three of the 2021 Daytona 500 this past weekend, fans that were allowed into the grandstands rose to their feet and raised three fingers into the air.

The entire pitlane of mechanics, those on the spotter’s tower and crew chiefs atop the pit box all joined in with the salute, a mark of respect and remembrance to Dale Earnhardt.

Fans partake in their own tributes on their own accord every year, but on the week of the 20th anniversary of his death, the legacy of NASCAR’s biggest star lives on beyond just in the memories of fans.

Earnhardt arrived at Daytona in ’01 three years removed from finally conquering the 500. After years of close calls and nearly-moments, The Intimidator finally made it to victory lane in 1998 at the crown jewel race that had evaded him for so long.

It had taken 23 years that included plenty of other successes at Daytona, but the seven-time Cup Series champion finally won the big one that he’d been after. Three years on, it would host an afternoon of racing that was forever tainted by a last-lap crash that changed the sport.

Years of bad luck at the ‘Great American Race’ were finally over, but Earnhardt was always a factor at the superspeedway rounds. He was renowned for understanding the airflow like none of his rivals could.

His hard-nosed approach to racing earned him plenty of critics but a legion of fans along with it. A blue-collar background and non-PR friendly approach to his racing burnished his reputation.

As Gordon Kirby said for Motor Sport in 2012,”Through the late 1980s and ’90s Earnhardt cultivated and projected his image as one of NASCAR’s toughest guys, always ready to use the fender when necessary. Nobody played the game of stock car racing better than ‘The Intimidator’.”

In the year prior to Earnhardt’s death, three other drivers had also died at the wheel in the top divisions: Adam Petty, Kenny Irwin Jr. and Tony Roper. Despite their fatalities, the attitude of the Cup Series’ drivers could best be described as cavalier. 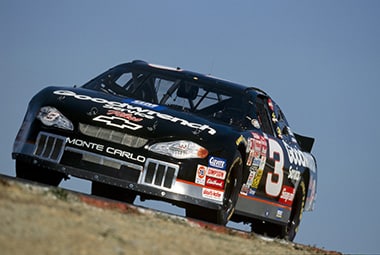 I had to chuckle when I read Paul Fearnley’s blog last week about Romain Grosjean and the need for bad guys - black characters - in motor racing. Paul’s examples…

During testing ahead of the 2001 race and on the race day itself, many drivers opted not to wear the HANS device, reporting that the equipment was uncomfortable or affected their ability to extricate themselves from the car in the event of an accident. So it was hardly surprising that when the series’ top star turned away from safety precautions, others would follow his lead.

On lap 173 of the ’01 Daytona race, Tony Stewart was sent airborne in a crash that took out 18 other drivers in an accident that looked far worse than the one Earnhardt would later suffer.

The no3 black Monte-Carlo was, as usual at a superspeedway, running up front for the majority of the race, but as the laps wound down victory was not the likeliest outcome for Earnhardt.

On the final lap as the Dale Earnhardt Incorporated no15 and no8 driven by team-mate Michael Waltrip and son Dale Earnhardt Jr respectively rounded Turn Four just in front of him, NASCAR was about to change forever and undergo one of its darkest moments.

The dichotomy of Waltrip earning his first Cup Series victory after a long road to get there while safety crews and ambulances attempted to extract Earnhardt from his Chevrolet a few hundred meters away was a gutwrenching and cruel ending to an otherwise miraculous day of racing.

Crestfallen NASCAR president Mike Helton addressed media later that evening and confirmed the passing of Earnhardt Sr, the death of its seven-time champion led the organisation into a revolution in terms of safety.

Since the 2001 Daytona race, there has not been a single fatality in the top three series’ under the NASCAR umbrella.

The HANS device was a controversial topic among many Cup Series drivers, but that reluctance dissipated almost entirely following the crash.

The device was mandated by the series and made compulsory in October that year following the death of Blaise Alexander in an ARCA race at Charlotte Motor Speedway.

SAFER barriers were implemented at all NASCAR ovals after extensive research into reducing and more effectively dissipating energy during a crash and are present at other international venues today such as the Circuit de la Sarthe at the Porsche Curves and Baku’s street circuit at Turns 13 and 19.

In 2008, Jeff Gordon attributed the HANS device as the factor that saved his life in a crash at Las Vegas Motor Speedway. The no24 was turned around out of the second corner and straight into the inside wall at a direct angle, but the four-time champion emerged unscathed from the accident.

Ryan Newman’s horrific accident at the end of the 2020 race left him in hospital with serious injuries. Newman’s car was turned and flipped onto its roof before being struck by Corey LaJoie’s car on the driver’s side.

The impact was on the roll cage area on a section known as the ‘Newman bar’, a device implemented by NASCAR back in 2013 for added reinforcement, may well have been the crucial factor in the crash in preserving his life.

The major strides in safety since 2001 meant just two days after the crash, Newman was leaving hospital on his own two feet and walking round unaided.

By the time of his crash, Earnhardt had thoughts of retirement but his passion for racing was as strong as ever. The DEI team was a force in the top series and son Dale Jr was fresh from back-to-back Busch Series titles in 1998 and ’99, his future outside of the sport was looming.

“I worry that when I do say, ‘Hey, I’m gonna retire in 2005’, or whatever it is, whether I really can retire? Everybody has their time,” Earnhardt told the Washington Post in 2000. “And I’m still having mine and I’m enjoying it. Maybe I’m not right at the peak of it as much as I was.

“But I’m still there. I’m still a factor and a contender, and by no means ready to throw in the towel and give up and hand over the flag. Some son-of-a-bitch is going to have to take it from me.”

Though his career ended far sooner than he would have wanted, ‘The Intimidator’ has left a mark like few other drivers ever have on the world of motor sport.