Alex Bowman led home a Hendrick Motorsports 1-2-3-4 finish at Dover as the organisation dominated the entire afternoon for NASCAR’s fourth-ever sweep of the top four places by one team.

Team-mate Kyle Larson had led the most laps all afternoon but at the crucial final pitstops, the No48 team was able to put in a season-best pitstop time to get their driver out ahead for the final 97-lap stint.

Reigning champion Chase Elliott followed home in third place and is the only driver in the organisation yet to win this season. Team-mate William Byron held off a resurgent Joey Logano for fourth place to wrap up a historic result for the team.

Martin Truex Jr and Denny Hamlin battled at the start of the race and threatened to repeat Joe Gibbs Racing’s domination in the past few events. It wasn’t to be for the Toyota contingency though as Kyle Busch’s loose spark plug cable sent him seven laps down in the first half of the race while Truex caved in the front end of his Camry trying to dislodge debris from his front grille.

Kyle Larson took the lead of the race during the pitstops at the scheduled competition caution in the early running and it was a lead he held onto. A caution for Chase Briscoe’s Mustang in the wall at Turn One sealed Larson’s Stage One win as the Stewart-Haas driver got a little too hot into the corner trying to remain on the lead lap. 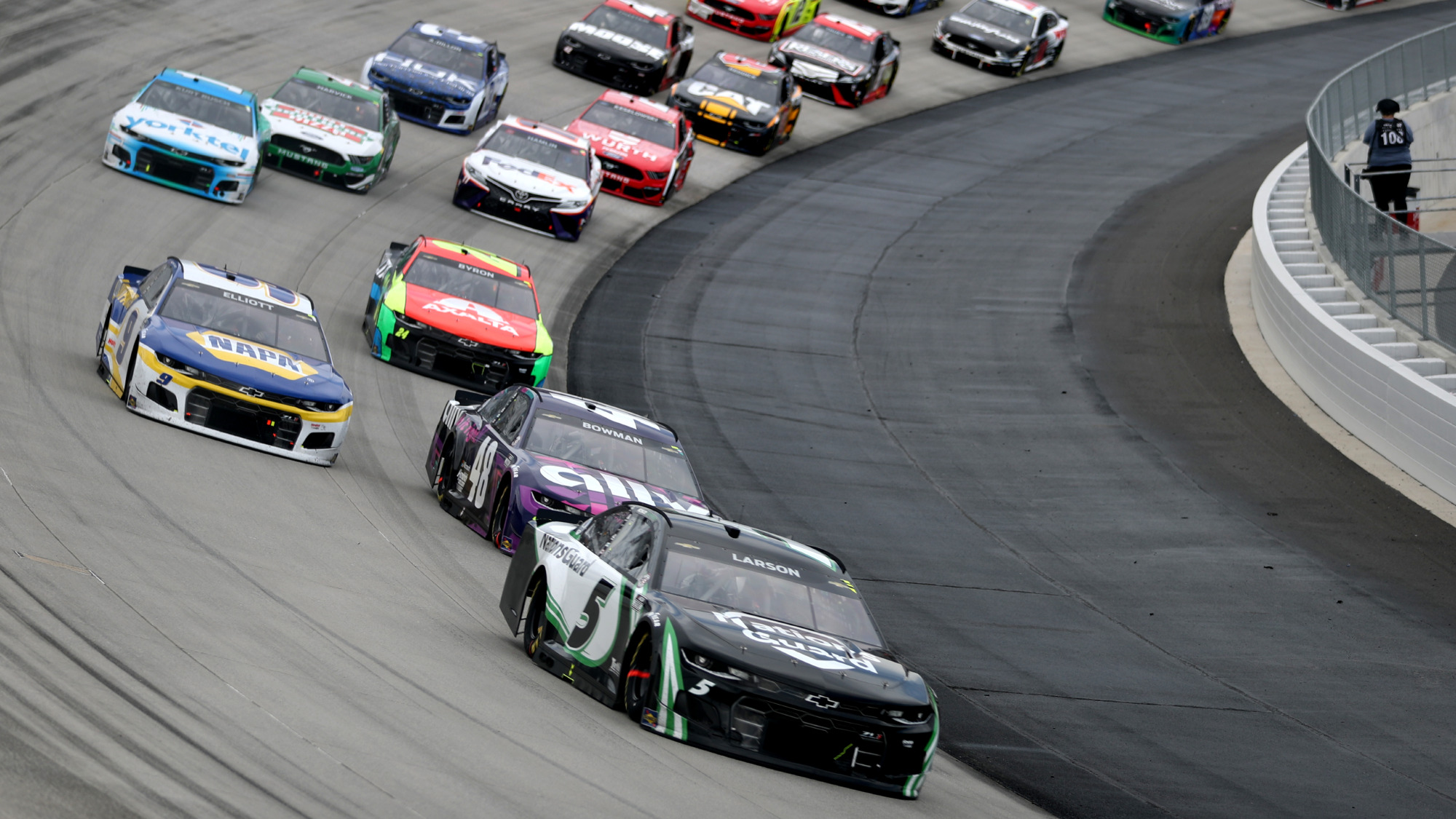 A relatively trouble-free Stage Two meant Larson’s domination continued as he retained his lead over the likes of Hamlin, Elliott and Ryan Blaney.

In a preview of the final stint, Hendrick swept Stage Two with Larson once again taking the green chequered flag first from Elliott, Bowman and Byron.

Aric Almirola’s horrible 2021 season continued as he slammed the outside wall at Turn Three with 99 laps to go, his right-front tyre going down and putting him out on the spot. The leaders came in to get fresh tyres and fuel.

A quick-fire caution followed as Anthony Alfredo hit the inside wall racing Ricky Stenhouse Jr on lap 314 and teams differed on strategy from here to the end. Joey Logano opted to take fresh tyres once again but could only make his way back up to fifth by the chequered flag.

Larson had led 263 of the first 303 laps and after losing track position to Bowman at the final stop, closed to around 1sec of his team-mate but didn’t have the pace to sustain a threat for the win.

It left Bowman out in front to take his second win of the season, the first time he’s been able to achieve multiple wins in a single year in the Cup Series. Larson, Elliott and Byron capped off a dominant performance from the Hendrick Chevrolets, leading home the field one through four. 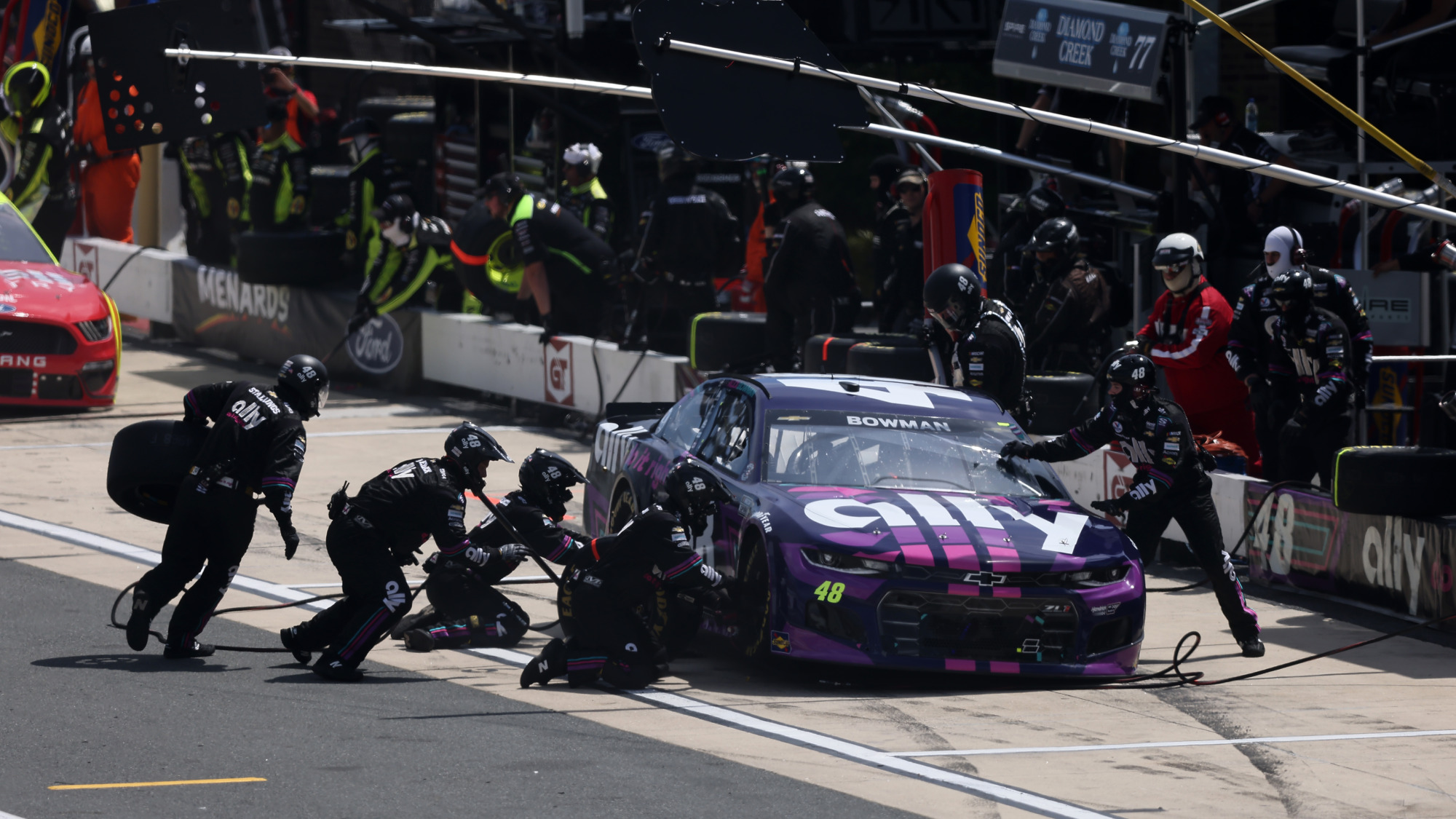 It was the first time since Roush Fenway Racing achieved the feat back in 2005 at Homestead Miami. Greg Biffle led home Mark Martin, Matt Kenseth and Carl Edwards in a Ford-dominated finale on that day.

Bowman’s win was also Hendrick’s 267th, putting it one behind Petty Enterprises in the all-time wins list for an organisation.

It was a day of personal milestones too as during the closing laps, Bowman clocked up his 1000th lap lead in his career.

It’s hardly the first time fans at Dover have watched the No48 car take to victory road. Seven-time champion Jimmie Johnson won at the one-mile oval 11 times during his career. Since taking over the car this year, Bowman has already notched up two wins in the first half of the season.

Following the victory on Sunday, rumours have already started to swirl that Bowman is in line to re-sign an extension to remain with the team and at the wheel of the 48 car.