Any thoughts that five-time NASCAR champion Jimmie Johnson might be past his prime were dispelled at Daytona on Sunday as Johnson drove a typically smart race to score his second Daytona 500 victory. Johnson has been out of luck at Daytona in recent years but he ended up being the man to beat in the closing laps of this year’s 500.

Nobody could make a move on Johnson over the last ten laps as he controlled the pack despite some shuffling in positions directly behind him. Dale Earnhardt Jr made a great move on the last lap to come from fourth to second and make it a 1-2 for Hendrick Motorsports. 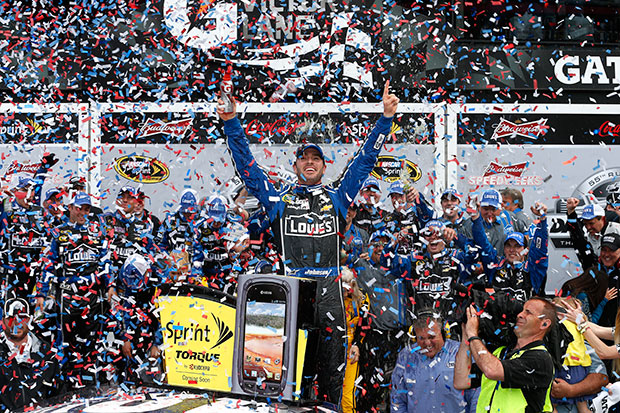 Johnson’s win came in his 400th start and was the 61st Sprint Cup victory of his NASCAR career. He joins NASCAR greats Lee and Richard Petty, David Pearson and Dale Earnhardt who were also able to win their 400th starts in NASCAR’s top league.

“Plate racing is an awfully tough form of racing and there’s a lot of luck involved,” Johnson said. “Pack racing is a little different. You can’t ride and wait for things to happen. You have to race all day long and fight for track position. We had a fast car and could stay up front all day long. I had a lot of confidence leading the train in those final few laps. I knew just how fast the car was.”

Johnson explained how he controlled the race over the final few laps. “When the caution came out we were in the lead and that gave me lane choice for the restart,” Johnson said. “I chose the outside because the outside lane worked in most situations. The inside lane would rally from time to time but you needed a long line of cars to make it work. When I had lane choice I knew we were set up to win the race and it was up to me to not make a mistake and blow it.

“At the end it got exciting,” Johnson added. “I was waiting for the run and it came from further back than I expected. Dale Jr got a big shove and was coming up the inside. I moved down to defend and we were able to get a 1-2 for Hendrick Motorsports. We had a game plan the whole week and we worked real hard to make the car a little bit better each day. I had one heck of a race car today.” 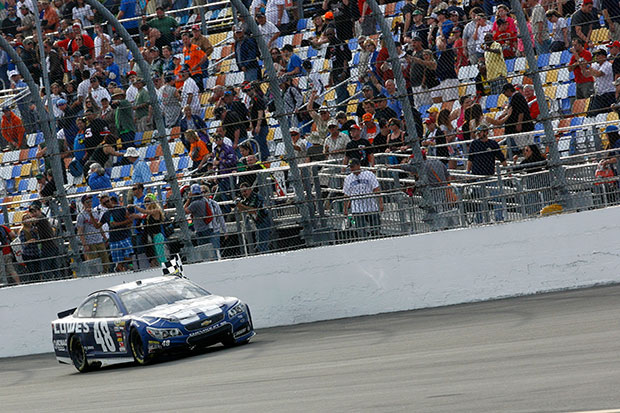 Pre-race favourites Kevin Harvick and Tony Stewart were eliminated early in the race in a multi-car accident. Harvick won the previous weekend’s Sprint Unlimited race and also won his 150-mile qualifying race last Thursday only to find himself the victim in a nine-car shunt less than a hundred miles into the 500. Stewart also looked good in practice and the qualifying races and won Saturday’s Nationwide race for the fifth time only to join Harvick as an innocent early victim.

With just over 100 miles to go last year’s 500 winner Matt Kenseth was leading in his first start with Joe Gibbs’ Toyota team. In fact, Gibbs’ trio of Toyotas driven by Kenseth, Kyle Busch and Denny Hamlin ran 1-2-3 for a while before Kenseth suffered a transmission failure and team-mate Kyle Busch blew an engine a few laps later.

Pole winner Danica Patrick drove a strong race, leading five laps and running among the top 10 most of the distance. She was running third in the closing laps but fell to eighth on the last lap as everyone scrambled for position. Nevertheless, Patrick scored the best finish for a woman in the Daytona 500 and also became the first woman to lead the 500.

Meanwhile, everyone’s attention was captured by a giant, multi-car wreck on the run to the chequered flag in Saturday’s 300-mile Nationwide race. It was a classic restrictor plate accident with everyone jammed together in a pack, all of the drivers flat on the throttle. Only yards from the finish leader Regan Smith tried to block Sprint Cup champion Brad Keselowski resulting in a freight train-like collision. 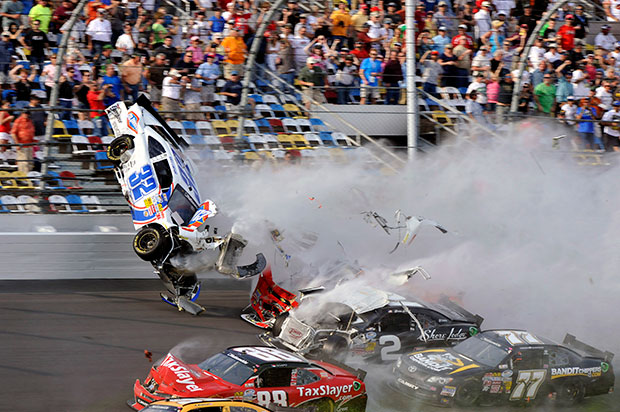 Kyle Larson was directly behind Keselowski and Larson’s car flew into the air, nosing into the catch fence just above the retaining wall. The front suspension and engine from Larson’s car were torn away releasing a barrage of shrapnel that showered the grandstands. A chaotic scene ensued and 33 fans were injured, at least two suffering critical wounds. Reports on Sunday evening said the most seriously injured fans were in stable condition. Two of them remained in hospital by Monday morning.

NASCAR’s vice president of operations Steve O’Donnell said NASCAR and track officials would conduct a thorough review of the accident. “We’ll bring in some outside experts, particularly through our research and development centre in North Carolina,” O’Donnell said. “That’s how we got to the SAFER barrier. We’ll look at the fencing as well. It will be a group of experts that we’ll involve. We’ll look at every piece on the car, what came off and what didn’t. We’ll review the film of where it hit and look at everything. Every aspect of the car will be looked at.”

Of course, the dreaded restrictor plates are the real culprit. Horsepower is cut in half for the plate races at Daytona and Talladega, producing ‘pack racing’ with the cars bottled together. Drivers hate ‘the show’ that restrictor plates produce because it also produces spectacular multi-car accidents. Some people believe restrictor plate racing is the world’s silliest form of motor racing, but it’s likely to continue unchanged because it achieves NASCAR’s goals of close, competitive racing with plenty of media and fan-pleasing wrecks. For NASCAR, it’s all about ‘the show’.