The Team Penske driver took victory in the premier stock car class’s first race on dirt for 51 years, winning from Ricky Stenhouse Jr after a mistake by Denny Hamlin took him out of contention for the win on the overtime restart.

Bristol was covered in 2300 truckloads of dirt for the special event that many had predicted the drivers with prior dirt experience would dominate. That couldn’t have been further from reality as favourites Kyle Larson and Christopher Bell suffered their own calamities in the early phase of the race.

Larson, victor of the 2020 and 2021 Chilli Bowl Nationals dirt race, was sent to the back of the pack at the start for an engine change and was caught up in several wrecks as he made his way through the field, including the incident that took Bell out of the race. 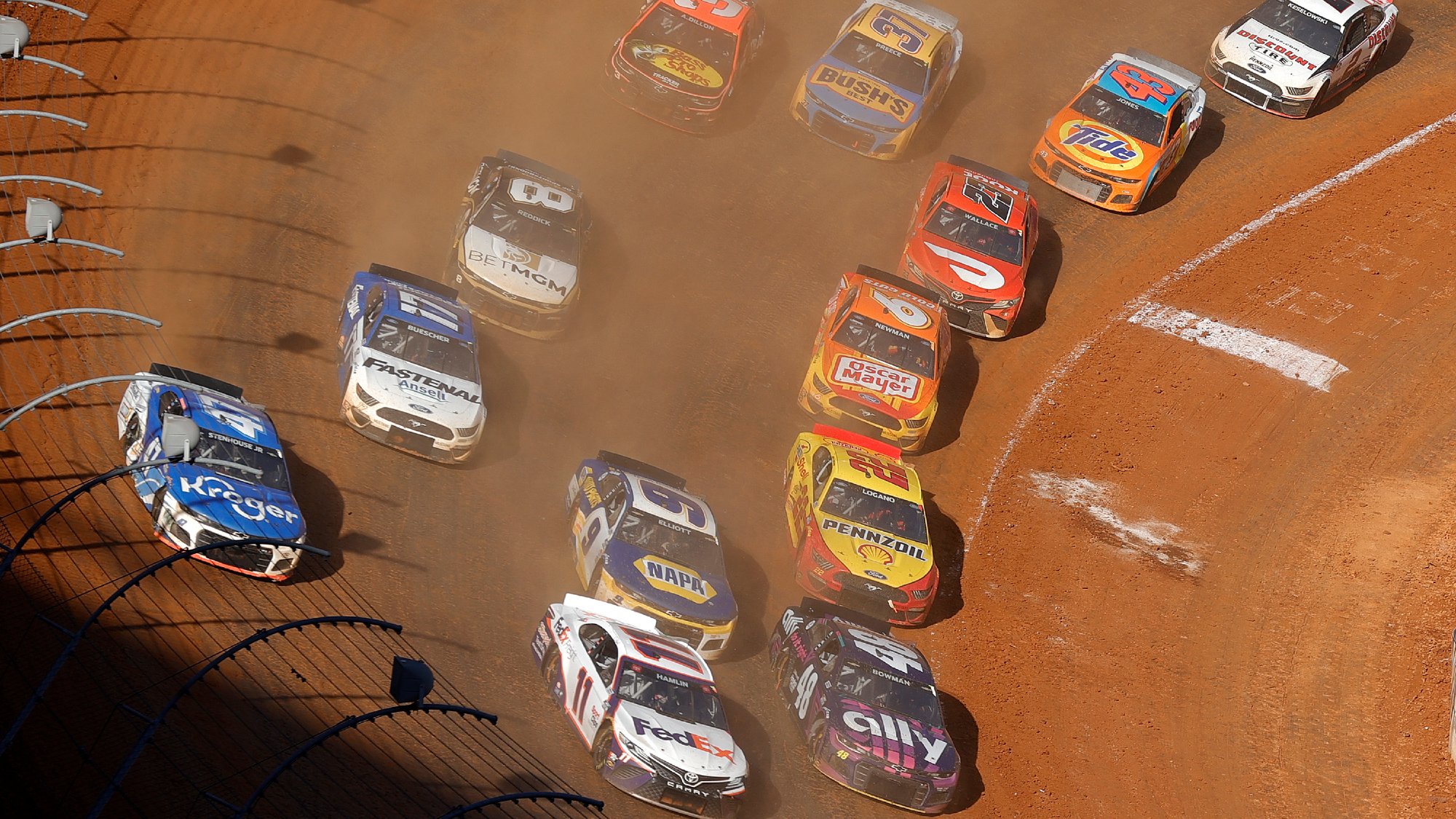 There was plenty of close calls and chaos at restarts

Bell spun up in the high line on lap 52 right in front of Larson before being collected by the no42 of Ross Chastain. While the damage was fixable on Larson’s car, Bell’s car had sprung an oil leak and the incident ended his afternoon.

Martin Truex Jr dominated the opening stage after taking victory in the truck race earlier in the day, but a surprise package in Daniel Suarez wrestled the lead from the Joe Gibbs Racing no19, using his front bumper to take the lead in the early laps of Stage 2.

The Mexican driver led the majority of the way until a late caution in the second stage that allowed the field to close in once more and gave Joey Logano the chance to slip by for a race lead he didn’t surrender.

A spin for no66 Mike Marler brought out the final yellow with four to go and set up an overtime finish. Hamlin was told over his team radio to “make it happen” from second but sent it in a little too deep on the final restart going into Turn One. He slipped up the track and into the wall, giving Logano the cushion he needed to take the victory.

The first dirt race in the top NASCAR series for over 50 years was a resounding success entertainment-wise, with the track announcing mid-way through Monday’s race that it would be back for 2022, hopefully with packed grandstands.

While the issue of dust reared its head as the evening sun caught the dust particles and made vision a major issue without a wetted track surface, NASCAR will have learned its lessons in time for the return of dirt in ’22.

The drivers gave their seal of approval to the event, with many including Truex and Suarez, who had no prior dirt racing experience until the lead into the weekend, showing competitiveness against the dirt racing pros in the field.

Bristol on dirt was one of the first major attractions in the altered 2021 calendar as NASCAR looks to shake up its racing offerings away from mile-and-a-half ovals.

Races on the Daytona Road Course and later visits to Road America and COTA add road course unknowns into the mix which have provided some of the most action-packed races in recent years.

Its experimentation with new formats such as the addition of the ‘choose cone’, allowing drivers to pick which lane they restart in, has added a strategic element to restarts, making driving precision and focus from teams even more important in late-race situations.

With Logano becoming the seventh winner in the 2021 NASCAR Cup Series season, it is quickly becoming up to be one of the most unpredictable and exciting racing series to watch.