Ryan Blaney has committed his long-term future in NASCAR to Team Penske, after the team announced a multi-year extension had been reached.

It means that one high-profile name is off of the 2021 free agent market, with several other top drivers’ futures undecided.

Blaney, who leads the 2020 NASCAR Cup standings after three rounds, has been with Team Penske since 2012.

After a stint driving in the Xfinity Series, he graduated to the cup series full-time with the Wood Brothers team in 2016.

Since then, the 26-year-old has recorded two further victories and finds himself heading up this season’s championship on points.

Blaney has been unfortunate not to take a race win at one of the first three rounds, recording a second-place finish at the curtain-raising Daytona 500, and says that the new deal is an exciting prospect for him.

“I’ve always said, it’s been a lifelong dream to be able to drive a racecar for Roger Penske,” Blaney said.

“I am proud of what we have accomplished with the no12 Team Penske Ford and our ability to represent great brands. 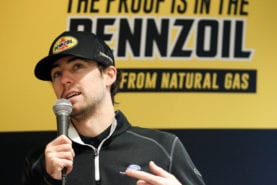 Ryan Blaney has committed his long-term future in NASCAR to Team Penske, after the team announced a multi-year extension had been reached. It means that one high-profile name is off…

“It’s really exciting to know I will continue to drive for this organization in 2021 and beyond.

“I am fortunate to be surrounded by extremely talented people throughout the organization and have no doubt we will continue to compete for wins and championships well into the future.”

The impending retirement of seven-time NASCAR Cup Series champion Jimmie Johnson from full-time competition has opened up the possibility of a busy driver market.

Kyle Larson, Alex Bowman, Erik Jones and Corey LaJoie are all highly rated talents out of contract at the end of the current season, and the vacant no48 seat at Hendrick Motorsports is a highly coveted one, particularly with the improved performance of the Chevrolet team at the start of 2020.

Team owner Roger Penske said that he was pleased to keep such a driver in his ranks.

“Ryan is a true talent with a long runway ahead of him and we are excited to have him as a part of the future of Team Penske,” Penske said.

“Since joining our team, Ryan has developed into a championship calibre driver and his personality and engagement with fans has made him a terrific ambassador for NASCAR.

“In addition, Ryan has done a great job of working with our partners to support their activation and investment throughout each year.

“I am looking forward to even more success together.”