NASCAR’s Chase for the Cup begins this Sunday at Chicagoland Speedway and no matter what you think of the series’ playoff format, it’s given us one of the year’s best stories: the comeback of Kyle Busch. 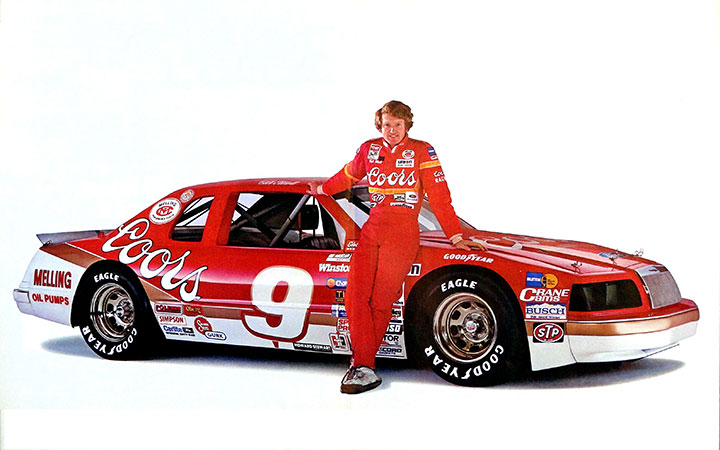 After breaking his leg in an accident in the Daytona 500 support race, Busch sat out the first 11 rounds of the season before returning at Charlotte in May. Since then he’s been locked in a desperate bid to accrue the necessary points to make the Chase. His astonishing run included four wins in five races, prompting many fans to lobby for his inclusion whether or not he met the criteria, although fortunately the rulebook will remain unmolested thanks to a series of strong results before the cut-off.

Thirty years ago, another remarkable story was playing out in the Winston Cup. On September 1 1985, Bill Elliott won the Southern 500 at Darlington and with it the Winston Million.

At the end of the 1984 season, it was announced that the four blue riband events on the calendar – the Daytona 500, Talladega 500, World 600 and Southern 500 – would collectively become a Grand Slam. If any driver could win at least three out of the four, he could net himself $1 million.

Bearing in mind no driver had managed that in any season, it was a worthy challenge – even Richard Petty‘s 27-win ’67 title didn’t include the feat. But one of NASCAR’s greats was just gearing up for the most fruitful period of his young career and his team was ready to set a new performance benchmark.

Elliott had made his debut in 1976, with his dad George as team owner and brother Ernie as crew chief, and spent the next few years running as many races as the sponsor money allowed. With such limited means there were no wins, but the combination of Bill’s talent behind the wheel and Ernie’s engine-building resulted in 23 top 10s between 1977 and 1981. At that point, the Elliotts’ main sponsor Harry Melling bought the team from George, allowing for the tight-knit group to make their assault on the sport full-time.

The first win came at the last round of the ’83 championship at Riverside and Bill’s consistent form had him third in the standings. He finished third overall again the following year, adding three more wins to his tally and heading into the next season as a driver poised to make a breakthrough. Still with the small Melling team, the scope of that breakthrough surprised everyone.

Bill was untouchable at the Daytona season opener, qualifying on pole and managing the race from the front. After 136 of 200 laps in the lead, the first win towards the Winston Million was his. As is pointed out in the commentary in the video below, everybody had assumed Ernie’s qualifying engine was a “hand grenade”, but they ran it in the race as well.

While it’s true that both of Bill’s main challengers – Cale Yarborough and Neil Bonnett – retired with mechanical problems, his win was an impressive performance from both driver and team that, realistically, would’ve taken a Herculean effort to overcome.

By the time the Melling squad arrived at Talladega in May, Bill had already won another two races and his rivals were feeling the heat. Darrell Waltrip complained that Bill’s performance was making the sport look bad, thus NASCAR mandated all Fords have their ride heights raised by half an inch, with all GM cars lowered by the same. Even with this new handicap, Bill pulled off one of the greatest comebacks in history.

He’d shot into the lead at the start once again, but wasn’t losing the pack in quite the same fashion as at Daytona and soon a battle ensued with Dale Earnhardt and Kyle Petty joining the fray. That is until an oil line broke at over quarter-distance, forcing Bill into the pits. Now two laps down, he set about catching the leaders. With no yellow flags to close up the pack and long periods with no draft, Bill not only managed to un-lap himself, but take the win. Notice had been served: not only had the Melling team’s engines got more to give, it had the driver to handle them.

At Charlotte later that month, Bill had the chance to win the Winston Million, but although he qualified on the pole he only finished 18th, with title rival Darrell Waltrip taking the victory. While it wasn’t the end of the challenge, it would be a long three months before he got his chance to complete it.

By the time of the Southern 500 Bill had already won nine races that year, all on the big speedways, and was still in a good position to win the Million. At the end of the race, the battle was between Bill and Yarborough, but the body language of the cars said everything about their chances: Bill was calm, smooth, unflustered; Yarborough was fast, but smoking the tyres in the corners, running wide, trying every trick he could muster.

“Nine times out of 10, I look back and most of the other teams beat themselves,” Bill told Ford in 2011. “They were racing the racetrack and what they thought the speeds were going to be, and we were racing ourselves.

“I was fortunate enough to sit on the pole and win the first race at Darlington,” he explained. “We took that car and never ran it anywhere else. We totally stripped it, went through it from head to toe and that’s the car we took back to Darlington in the fall. Earnhardt was really good that day, [Harry] Gant was good that day, Cale was good that day; Harry blew up, Earnhardt wrecked, then right there at the end, Cale broke a power steering line. I felt like we had about a fifth-place car that day, but circumstance put us in victory lane.”

The newly-nicknamed Million Dollar Bill lost the title to Waltrip that year, despite his eventual 11 wins, but further success would be his down the line. In 1987 he won the Daytona 500 for the second time, then set the fastest-ever NASCAR qualifying lap at Talladega, averaging 212.809mph. With restrictor plates being introduced the following season, the record is still his. 1988 brought his one and only championship, but he was still winning races in 2003 and was voted the most popular driver in NASCAR a record 16 times.

Jeff Gordon was the only other driver to win the Winston Million – the concept was retired after that 1997 triumph – but he didn’t do it with his dad running the team and his brother building the engines. Like his lap at Talladega, Bill Elliott’s achievement will never be equalled.