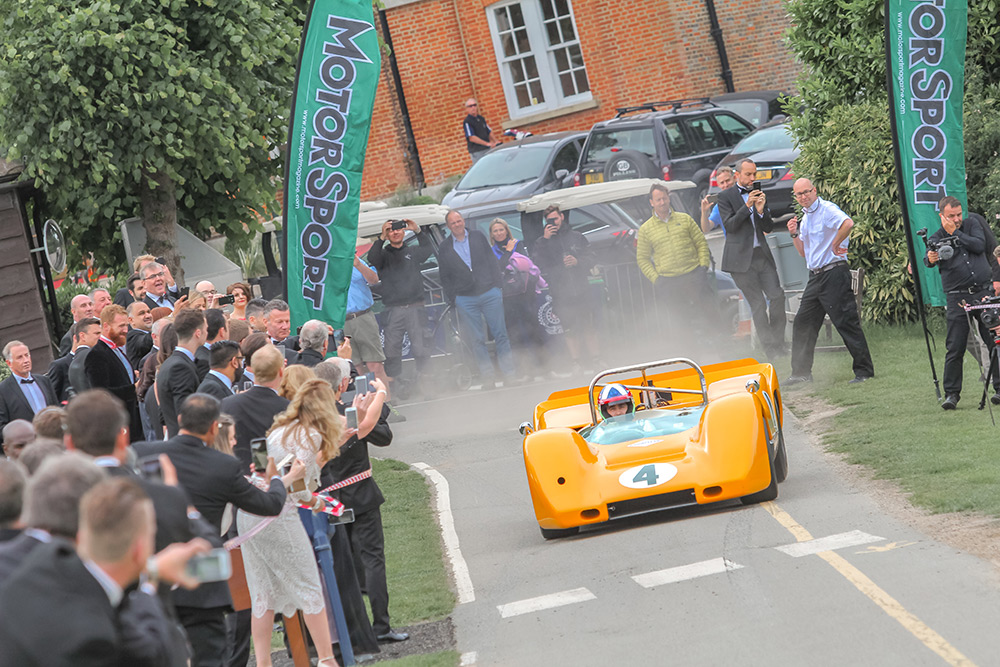 The Royal Automobile Club’s stunning Woodcote Park venue has tonight (June 7) seen the latest six greats from motor racing past and present inducted in to the Motor Sport Hall of Fame.

The class of 2017, as voted for by the magazine’s readership, is home hero Nigel Mansell in the Formula 1 category, Brian Redman from sports cars, Barry Sheene from motorcycling and in the US racing category Roger Penske.

Jennie Gow returned once again to host, joined by Motor Sport editor Nick Trott to begin proceedings. The two had earlier commentated on the moving motor show up the venue’s Captain’s Drive, the highlight being Redman returning to the seat of an original Ford GT40.

He was joined on the hill by Paul Hollywood astride the MV Agusta John Surtees took to the world title in 1960, and Freddie Spencer (dressed in black tie) on Barry Sheene’s Texaco-Heron title-winner from 1976. Bruce McLaren’s own M6A roared away with a beaming Dario Franchitti at the wheel, and David Lapworth powered a squirrelly Prodrive MG 6R4 up the Drive. John Watson made the most noise, clambering into a Penske Camaro replica to mark the esteemed team owner’s award.

Once the smoke had cleared from the runs up the hill, tribute was paid to John Surtees, whose Henry Surtees Foundation was this year’s official charity.

Mansell then visited the stage for the first time in the evening to be joined by commentary legend Murray Walker, who was the deserved recipient of the new Inspiration Award. Inaugurated this year, the Inspiration Award will be a fixture of ceremonies to come, celebrating those who have shaped our sport and whose passion has left an indelible mark.

“I have an incredible privilege,” said an entertaining Mansell of Walker. “He has no enemies, he is an incredible inspiration to the whole world. He’s a friend to everyone, a father to all drivers, and just the most marvellous human being.” 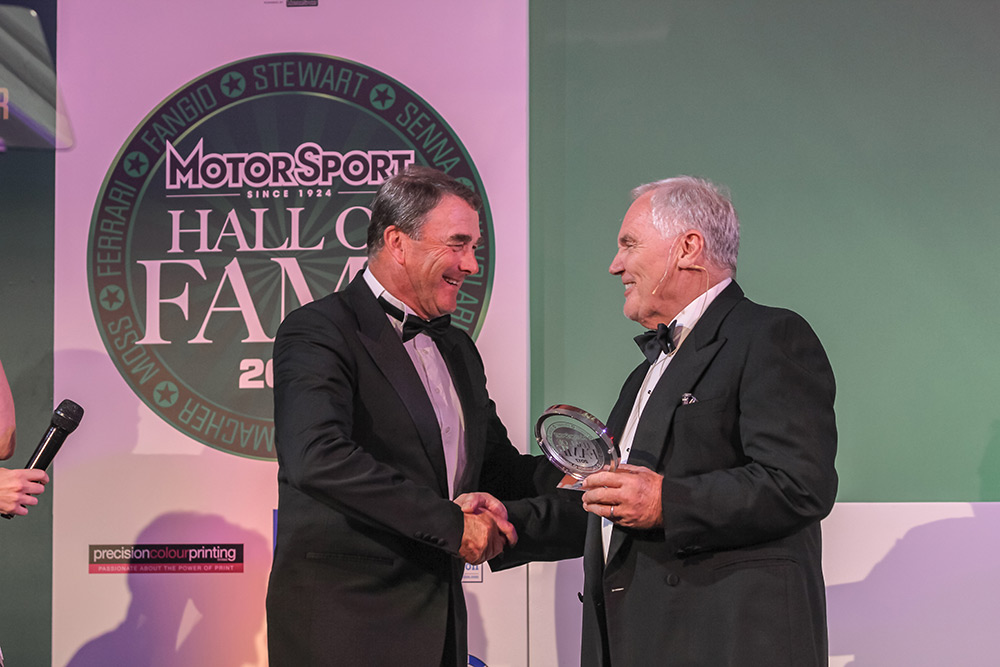 Unfortunately, due to the hectic schedule of his all-conquering eponymous racing team, Roger Penske was unable to accept his award in person but sent his thanks, having beaten his great friend Mark Donohue and AJ Foyt to the award. “I’m certainly there with you in spirit tonight,” he said in a pre-recorded video. “It is truly an honour to be recognised with such a talented class. We have always believed that a successful business and race team is only as strong as its people. The men and women that work on the cars and those that drove them have helped make the team what it is today. So while it may be my name on the award, it really represents all the people that have worked so hard to get to help us get to where we are today.”

It was the turn of the closely contested ‘bike category next, as double world champion Barry Sheene saw off Mike ‘The Bike’ Hailwood and TT legend Joey Dunlop to be inducted into the Hall of Fame. A fellow championship winner, Freddie Spencer was honoured to hand the award to Sheene’s sister Margaret Smart and his chief technician Martyn Ogborne, recalling memories of his first European racing event with Sheene, with whom he became great friends.

The second of the two new-for-2017 awards is the Industry Award, and the Motor Sport editorial team selected Prodrive’s David Richards CBE to be the first to receive it. He has won titles in rallying and sports cars, and had stints in F1 with BAR and Benetton. David Brabham who, along with Subaru managing director Paul Tunnicliffe, presented Richards with his award said: “He’s in the same category as Penske.”

It was soon time for Nigel Mansell, 1992 F1 World Champion, to return to the stage to rapturous applause. The Princess-backed category’s voting ebbed and flowed through the past 12 months, with Gilles Villeneuve and Cosworth’s Mike Costin and Keith Duckworth also leading the way at times. But it was Hall of Fame member Sir Patrick Head, in attendance to award Mansell his honour, who said: “I would put Nigel with Prost and Senna. I never thought ‘if someone else was in the car it would go quicker’, in fact, it was always the opposite.”

‘Our Nige’ signed off the evening by thanking the thousands that voted him into the Hall of Fame, saying: “It makes me very proud to accept this award. Like Penske said, it’s about the whole team, so my thanks also go to Patrick, Sir Frank and Colin Chapman for giving me my chance.” 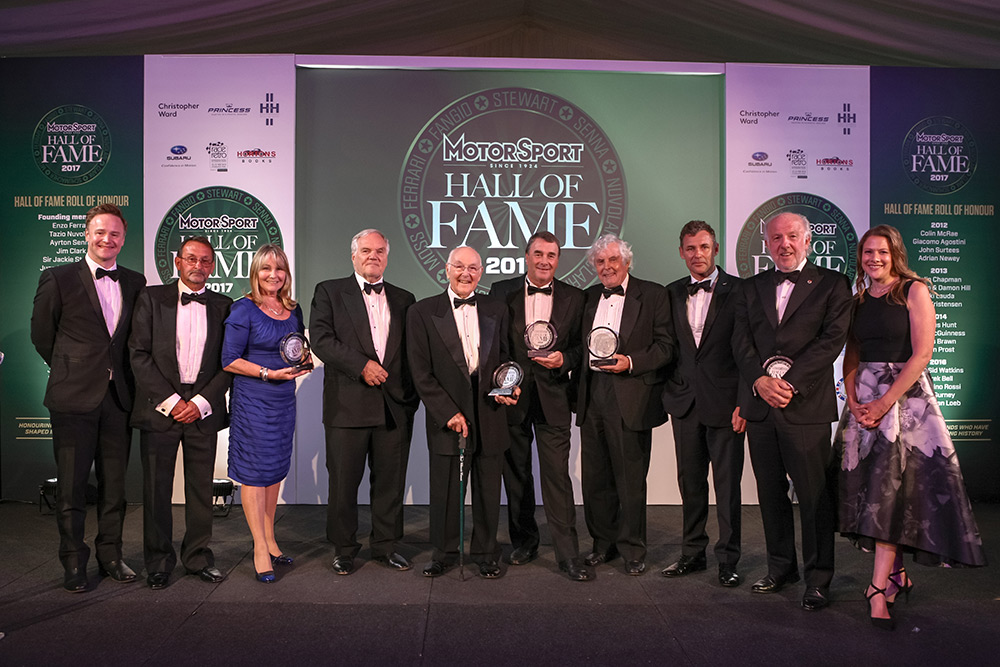