The Motor Sport Hall of Fame, held on June 4 at the Royal Automobile Club, Woodcote Park, has a new host for 2018. Taking over for this year is MotoGP journalist and presenter, and former BBC Formula 1 host Suzi Perry. 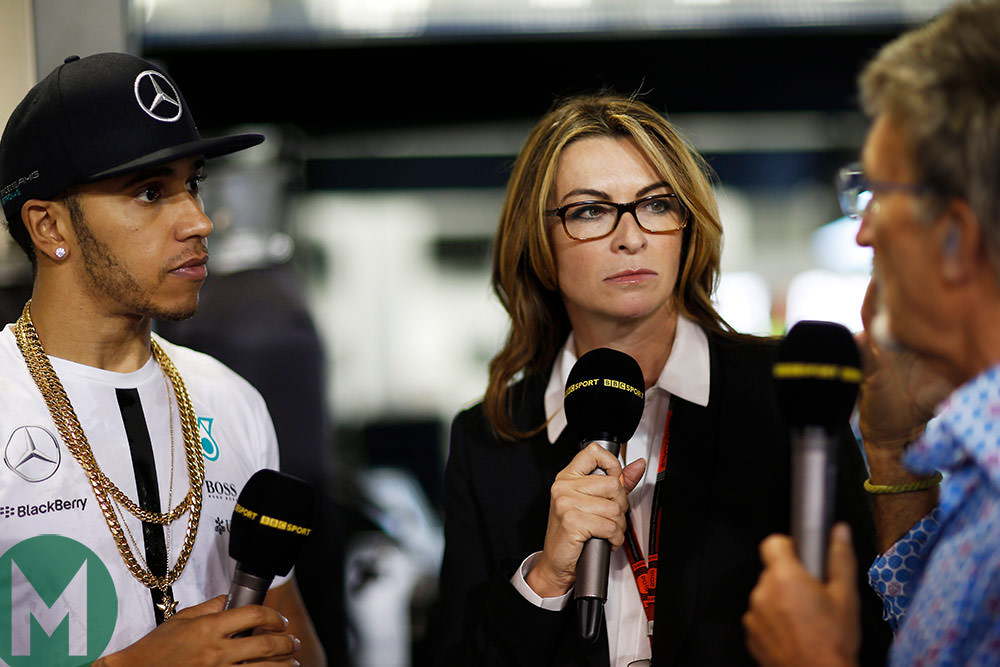 We met with Suzi recently to look ahead to the evening, for which tickets are still on sale, and to talk MotoGP, F1 and even Niki Lauda’s music taste…

Motor Sport: First off, welcome to the Motor Sport Hall of Fame.

Suzi Perry: I’m really looking forward to it. It’s clearly great company that we’re in, and you could spend all night walking around talking to everybody there with the amazing stories that they can tell. That for me is one of the best parts of this job to be able to come and do. It will be really nice to catch up with them, quite a treat.

MS: Talking of catching up with people, you’re now back in the MotoGP for the past few years. How has that been?

SP: I’m working with the guys that I used to interview 20 years ago, when I was first in MotoGP: Neil Hodgson, James Toseland, Colin Edwards. It’s so interesting for me because they’re now in my world and they always say, ‘Presenting is so difficult. I didn’t realize, I had no idea.’

It’s like family and we all really get on. We make these little online videos and what you see really is our relationship. It’s not scripted and we all are really close to each other and spend a lot of time together away from the track. They’re all really special people to me. They’re all super talented and world champions and it’s incredible to be in that company, but it’s more than that, it’s a long-standing trust.

A lot has changed since I was first in the paddock, though, the riders used to be a lot easier to get to. Now, there’s a lot more PR involvement. It was also really difficult when I first started because I was the only woman in the paddock, now of there are many. I had to really prove that I knew what I was talking about.

MS: It must have been a very different paddock when you moved to F1 with the BBC?

SP: My first year in Formula 1 was an intriguing time for me. It was a privilege to obviously be broadcasting the pinnacle of four wheels, but to be on the BBC for the last few years while it was on the BBC as well? We had five million people tuning in. It felt good to be a part of that.

Lewis was winning, and to be interviewing Lewis when he’d just become a world champion was very special. I got on with Lewis really well, always did great interviews with him and he was always very open. I liked the argy-bargy stuff that went on between him and Nico. It was a lot of fun and Max Verstappen was coming into the paddock for the first time.

For me, though, I like the stuff to happen on track more than off track. I think, invariably, Formula 1 has a lot of politics going on away from the track, which is part of the sport, but I still want to scream and shout at the television – especially if I compare it to MotoGP. There was definitely less jumping up and down from me, probably more thinking in F1 to a greater degree with the strategy and everything else. It’s more testing. They’re just completely different sports, and completely different paddocks.

There are some really great people, some not so great, some people with an agenda, some… what you would expect really. But definitely there were some amazing people that I met and I’m really glad that I did get to host it for three years.

MS: There must have been some great stories.

SP: Exceptional. I felt like I had to be on my toes all of the time, and I’d say it took me a season to bed in there and feel comfortable. Those two years were really good fun. We used to have a big night out every year in Russia, which became a sort of tradition. It was an amazing table: Niki Lauda started it, so it was me and Niki – he’s one of my favourite people, he’s the one person I really miss – Eddie [Jordan], David [Coulthard], Toto Wolff, and Paddy Lowe came a couple of times. So in that company, honestly, it was hilarious – some of the most fun nights.  By the end of the evening Eddie would probably be playing spoons, Niki would have me mixing songs, because he loves music, so I’d be DJ-ing on my phone with my small cheap speaker. There would be about 40 or 50 people around our table just because of the legends that are sitting there – I do not include myself in that. David would be jumping up and down dancing. It was a giggle.

MS: Wow, what does Niki Lauda listen to?

SP: Pop music. He likes George Ezra. I decided to make a radio show while I was in F1 on the kind of music that radio people listen to, so I went to interview Murray Walker and Clare Williams. Lewis did it with me. Lewis was really great because we were talking about normal stuff, he was playing his music from his phone and he’s really engaging. He likes a bit of Bob Marley. But Niki? Pop music.

MS: Moving back to the Hall of Fame, we’ve recently announced the finalists. So, who’s your pick from the bikes?

SP: That is tough, isn’t it?  It’s a really good list. Really good list. It depends, if you’ve put on the general hat then you’d have to go with Mike Hailwood because he covered everything and winner of so many TTs. He was world champion, then tried F1, and for a lot of people Mike Hailwood is the greatest ever bike rider. But then you’ve got people going, ‘No, it’s Joey Dunlop.’ It’s a great debate isn’t it? But I think I’ll pick Mike.

It’s an incredible list of riders already inducted, too. I was talking about John Surtees recently to my mum, who asked me a question about him and I started to get all itsy about the fact that he wasn’t a Sir. I’m sad that it’s too late with all the incredible work he did, not just his accolade of being world champion on two and four wheels, but the amount of charity work that he did. I look at some of the list of people that are sirs and I just– how can that be possible? It’s not right.

MS: Who of the current crop on the grid would be next to join this list do you think?

SP: It’s got to be Marc Márquez. But that could be 20 years down the line, he’s got aeons to go. That guy is going to win a lot of titles. He doesn’t seem to be interested in leaving Honda, he’s very happy there and he’s redefined motorcycle racing without any question. Valentino is now having to change his style which he has done interestingly this year.

SP: He looks at you and gives you 100 per cent concentration, as if you’re the only person that’s ever asked him that question, and I don’t know how he does it, because he has so much to do. He’s always hugely engaging. I think pretty much honest as well about everything.

I’ve never had a cross word with him, always had great interviews from him, he’s never refused us, never messes around or anything like that. I mean I’ve ridden pillion with Valentino, there’s not too many people can say something like that. We know each other quite well, so I think we have a good, trusting relationship with each other.

He’s still fast, Valentino, he’s got to win when he can and when he can’t, he needs to be there and finish the race, pick up what’s there, and hope that they will make mistakes.

I think I would probably melt if he got the 10th championship, because he should have it. It should have happened two years ago when the stars aligned really – let’s not go into that story, but it would feel wrong for me for him to leave the sport without that 10th title. But I look at the competition and I think, ‘How on earth is he going to win one over on Marc Márquez first of all, and then Andrea Dovizioso now?’

But, it’s MotoGP and you really never know.

You can still book tickets to the Hall of Fame, visit shop.motorsportmagazine.com/HoFtickets for more details or click here