Signed by the legendary Sir Stirling Moss, this 1/18 #722 Mercedes-Benz 300 SLR comes on a hand signed display case and delivered in a custom made livery box.

Sold By: The Signature Store

The 1955 Mille Miglia was a 1,000 mile race held on a course made up entirely of public roads around Italy. This race was won in the Mercedes-Benz factory prepared 300 SLR, which was numbered #722, reflecting the time in the morning Stirling Moss and Denis Jenkinson left the start. Moss and Jenkinson had prepared a revolutionary set of pace notes on a long roll of paper inside an alloy and Perspex case. It was their team work which gave them their record average speed (97.90) for the 992.329 miles; a record which will never be broken, nor matched in terms of driving ability.

Our ‘quick-silver’ box set, features a ‘722’ branded presentation box containing a ‘mirror’ display base, a 1/18 scale Mercedes-Benz 300SLR model, and plaque signed by Sir Stirling Moss, along with a photo Certificate of Authenticity.

The perfect gift or addition to your quality collection. 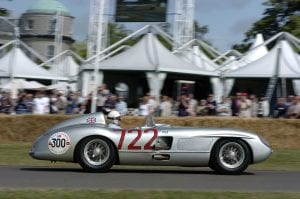