THE SORROWS OF A SCRAMBLER.

By a Singularly Unsuccessful Competitor in the South Midland Centre Southern Scott Scramble.

persuade our machine to run, fit two new tyres, fill two tubes with a little known, but nevertheless excellent puncture preventer, to wit, Fibermetic, and lastly secure a few hours sleep before the great bumping. The machine, a well-known o.h.v. 350 c.c. single, starts, but runs most erratically. Plug changed. No improvement. Carburettor cleaned. Still no improvement. With shaking hands we examine the magneto. As we feared, the platinum points are worn right down. New pair fitted. At last ! Machine runs well. Now we face the apparently =pleasant task of inserting the ” Fibermetic ” in the inner tubes. Contrary to our experience of other puncture sealers, however, this operation is performed with ease—half-a-dozen charges of an oil squirt being all that is required. The tubes and covers are fitted after a short struggle and we sink down to recover from our exertions. All is now complete, we leave the machine and repair to supper, as it is now quite dark. Suddenly an awful fear strikes into our heart and we stop with a morsel of food suspended midway between plate and mouth. Supposing the magneto trouble lies deeper than the platinum points ? Will the new points burn away in the same way as the old ones, perhaps even before Camberley is reached ? We return to the garage, remove the contact breaker cover and start the machine. A miniature display of lightning between the points confirms our worst fears. Confusion and rapid thought.

Leaping into the family runabout, we scour the town for friends with similar machines. We find one. Will he lend us his magneto ? Delighted. The magneto is removed by candle-light in the open air, borne off in triumph, and fitted in place of its offending mate. Timing by the aid of the sidelights of a car proves a chancy business, but by good fortune we get it dead right first time. The machine is tested, and it at once becomes apparent that a vast improvement in the running has been affected. So at last to bed, yes, really this time ! Saturday morning dawns brightly, and the thirty mile run to Camberley is performed with an increasing

sense of satisfaction at the obvious good behaviour of the machine.

The Victoria Hotel, Camberley, presents a busy scene, spectators, competitors, motor-cycles and petrol lorries huddled together in a small yard, while a steady babel of voices demands this, that and the other, and discusses the latest frightfulness discovered by the organisers. Having been forewarned, we remove all superfluous clothing, make a few adjustments, replenish the tanks, and move to the start. Here a lcose sandy and stony precipice confronts the eye, which we are told is the easiest bill on the course. Anon the competitors are dispatched, comic relief being provided by a large man (C. M. Harley) on the smallest machine ever seen, a 174 c.c. Zenith, with no mudguards and tiny tyres. He remarked that it was easier to carry than most machines, a fact which he proceeded to demonstrate. We were not surprised to see that the midget engine required assistance, as this competitor disappeared over the sky-line. There were not many failures on the first hill, a few riders fell heavily, while some treated it as a speed hill climb and (quite right too) disappearing over the summit in a wild leap and a cloud of dust. By the time we start, the sandy track has been badly cut up, and we skid as we accelerate ; all out in bottom gear, half flying, half skating, we breast the summit with a satisfying leap at the top. Did we hear applause ? Perhaps, but then we expect most people did too. Sharp right turn, over two two-foot mounds in rapid succession and then, changing up, we speed along a straight sandy track in a steady wobble, actually overtaking another competitor as early as this. This is fine, we think, beginning to enjoy the feeling of complete lack of control, caused by the bumps and loose surface. Over heather, sand and rabbit holes we career, through a deep ditch, yelling frantically to another competitor to make way for us, which he, poor mortal, has little chance of doing. However, he is soon left and shortly 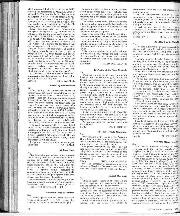 Sir, May I appeal to your readers for any material about military staff and command cars. This is required for a book with terms of reference covering commanders of all… 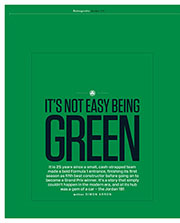 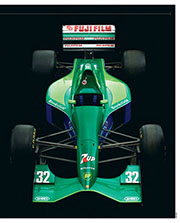 It's not easy being green

The past 20 years have not been kind to Formula 1 newcomers. Of the three that arrived in 2010 only Manor survives – and then in much-recycled form. BMW’s brief… 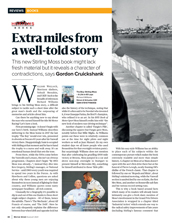 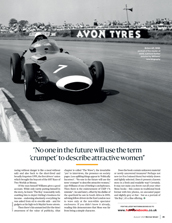 The Boy: Stirling Moss — A Life in 60 Laps book review

William Wallace, Morrison shelters, Yehudi Menuhin, and UKIP. Such is the breadth of references Richard Williams brings to his Stirling Moss story, a difficult subject to tackle such a short… 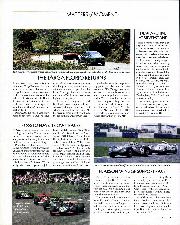 Access to racing history should be simpler and quicker in future thanks to a new initiative to centralise the archives of major clubs and circuits. A new body called the…