For any who admire the days when drivers were fat and tyres were skinny, the name ‘Fon’ de Portago will have particular resonance. Not because he was tubby – another Fangio or Gonzalez; far from it but because his name stands tall among those who burnished that special charisma which is Ferrari’s.

He was educated in Britain, France, Spain and the USA but hated academia and loved sport. He won his pilot’s licence at 17 and lost it almost immediately by flying under a narrow bridge to win a $500 bet.

He played a ferocious game of Jai-Alai (Pelota), swam competitively, won a tennis title and took up top-level polo, yachting and shooting. He was a tremendous, fearless, horseman, winning three successive French amateur titles. He rode twice in the Grand National, in 1950 and ’52, but spun off both times. He lived at a frantic pace, rode in as many as 150 races a year and in one week at Pau was said to have saddled 32 winners from 36 rides.

A born gambler, he was renowned at roulette playing several tables at once. Like James Hunt later, he flouted all dress codes. Where Hunt preferred T-shirt and jeans, ‘Fon’ was seldom without his favourite grubby leather jacket, thick black hair habitually uncut, dark-shaven, a cigarette pasted to his lower lip.

Raffish, insouciant wealth was underlined by his home address in ‘Millionaire’s Row’: 40 Avenue Foch, Paris. Yet he was also virtually teetotal and would obsessively play pinball in a favourite cafe, his ambition to win free games and play all day, buckshee.

Some friends maintain he also sharpened his reflexes by having them throw knives at him. He’d catch them all by the handle. Don’t try this at home kiddies; de Portago was formidably well coordinated. One party piece was to juggle raw eggs, another was sleight-of-hand.

One former girl-friend frankly described to me his spectacular sex life as “fully acrobatic”. It was certainly very complicated, but he married a wealthy American girl named MacDaniel and they had two children.

The Cresta Run at St Moritz led to strong friendship with established ‘bobber’ Edmund Gurner Nelson a quiet American from Honolulu, 12 years his senior. I’m told “they hunted as a pair”. As ‘Fon’ grew too heavy for the turf, Nelson suggested dirt-track racing amongst the peasantry, in Paris, Strasbourg and Metz. ‘Fon’ shone, loved it and moved up-market, into road racing.

At the 1953 New York Motor Show, Ferrari importer Luigi Chinetti invited him to the Mexican Carrera Panamericana. ‘Fon’ recalled: “That involved sitting next to him while he drove I was terrified!” Their Ferrari 340MM failed on day two but de Portago was utterly hooked. 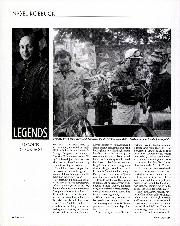 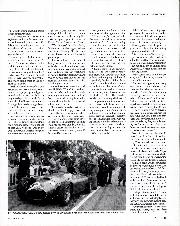 The other day I listened again to an interview, recorded in early 1957, with the Marquis Alfonso de Portago. Originally put out on a Riverside LP, it was reissued on…

May 2002 Issue
By Nigel Roebuck

Established Franco-American driver Harry Schell latched on. ‘Fon’ bought a second-hand Ferrari 250MM which they co-drove in the ’54 Buenos Aires 1000km and Sebring 12-Hours. A new Maserati A6GCS/53 followed and factory tester Guerrino Bertocchi spent time tutoring ‘Fon’ on how to drive it. He was enthralled, privy now to the art of heel-and-toe. At Le Mans he led the 2-litre class before retirement and then scored his first road-racing win at Metz.

His mother subsequently bought him a sports OSCA which he took to the German GP meeting at Nürburgring, where in practice Maserati’s driver Onofre Marimon crashed fatally. De Portago had counted him as a friend. Badly shaken, ‘Fon’ still raced next day but crashed, and was scooped into an ambulance. ‘Fon’ objected, thumped the driver, dumped him in the back, and drove back to the paddock with the seat hanging out of his trousers. His crash? ‘The Porsches were bumping me in the corners. Of course I bumped them back. It worked very well until I got behind Herrmann the leader… that’s how I went off.” Typically, that night found him in the casino at Bad Neuenahr, his bruises developing nicely. He won $10,000 which he invested in a new sports-racing Ferrari Monza, which was promptly shipped to Mexico for the Carrera.

There, bad fuel burned pistons. At Nassau in the Bahamas Speed Week he then won two races and placed second in a third. Enzo Ferrari paid extra attention – this client could drive. He was duly “permitted” to order a Ferrari 625A F1 car for the 1955 season and earned a quasi-works drive at Sebring. But in wet practice for the Silverstone May meeting, the 625A understeered into the bank and he broke a leg. That sidelined him until September when he co-drove a Monza with Mike Hawthorn in the Goodwood 9-Hours. It was a chastening experience: “Hawthorn is five seconds a lap faster!” But Mike liked him, coached him, and drank and womanized with him. ‘Fon’s lap times improved.

At Caracas, Venezuela, he was second behind Fangio. And then, back at Nassau, he won again by way of introducing the first Ferrari 250GT Berlinetta, solidly founding that fantastic bloodline. At winter sports time, de Portago created a Spanish bob team for the Winter Olympics trained by Ed Nelson and missed the two-man bobsleigh bronze by just 0.014sec. In the following Swiss Championships he finished second in the four-man bob, third in the two-man. So he missed the Argentine races in ’56 but was given works-backed drives at Sebring, and in Germany, France, Sweden and Italy. Mid-season, Enzo Ferrari offered him a works F1 ride to keep the team’s spare Lancia-Ferrari D50A in the hunt during the French GP at Reims.

In the British GP he was called in to hand over to Peter Collins, then limped Castellotti’s ruined D50A to the finish. In Germany he was again called in, but didn’t object: “One day someone will be asked to hand over to me”. Ferrari valued the gentlemanly side of ‘Fon’ “which always managed to emerge from the crude appearance he cultivated”.

But he really shone in his 250GT, winning at Oporto and Castelfusano (Rome), then winning the Tour de France, where, navigated by Nelson, he was able to beat Stirling Moss/Houel’s Mercedes SL `Gullwing’ and earn the Ferrari its ‘Tour de France’ title. He won in it again at Montlhery, where two friends, the Swiss Benoit Musy and French veteran Louis Rosier, both crashed fatally. Rosier had asked ‘Fon’ to drive his car, but changed his mind at the last moment. The Marquis took Musy’s Spanish wife to the hospital and what he saw horrified him. He emerged harder, matured, tempered: “Every driver believes it can’t happen to him. Inside I just know that it won’t happen to me.”

His third visit to Nassau then added a second and third to his record, but no victory, then it was back to the Alps for the winter sports season. On the Cresta Run the record from The Stream to the finish had stood for 25 years. ‘Fon’ broke it, then went to Argentina where, with Gonzalez, he shared fifth in the Grand Prix and, with Collins and Castellotti, third in the 1000km.

In February at Havana, Cuba, he led Fangio fair and square in his 860 Monza until a fuel line failed. He hurt himself at St Moritz before the Bobsleigh World Championships, but recovered to share seventh at Sebring with Luigi Musso.

By this time he was an international celebrity, plastered as much across the social columns and tabloid front pages as he was in the sports sections. His marriage failing, he was linked with movie actress Linda Christian, former wife of Tyrone Power. He revelled in his lurid image, declaring: If I’d lived 600 years ago I’d have been killing dragons or helping maidens in distress, but nowadays the only man who can help a maiden in distress is a doctor.”

He was 28. ‘Ed’ Nelson was 40, and they now prepared to run the trusty 250GT in their first Mille Miglia. But ‘Fon’ bent it in reconnaissance. Ferrari then called him into his office and entrusted him with the most powerful works car he’d ever driven – a 4.1-litre four-cam V12-engined 335S.

He drove it well. He lay fourth at the Rome control, then inherited third. Enzo Ferrari was at the Bologna depot to see his boys blast through: veteran Piero Taruffi (who would win), Wolfgang von Trips second, De Portago/Nelson third, Olivier Gendebien/Jacques Wascher fourth in their special 250GT. Ferrari recalled: “The difficult parts were over, the game was played.”

But ‘Fon’ and his soulmate did not finish. After 975 miles, near Guidizzolo and near maximum speed, their Ferrari’s left-front tyre burst and they died instantly in the ensuing crash which claimed hapless spectators, too. Five of the dead were children. The paparazzi rushed to the scene, and let rip. On May 14 all car and motor-cycle races on public roads were suspended in Italy and the mighty Mille Miglia was dead.