Rain drumming on your helmet as you snuggle into your BRM. Check the belts are tight. Release the clutch and off onto the warm-up lap. The track is flooded. A river. What’s happened to the Riviera sunshine? It’s all you can do to keep the car pointing the right way – even at this speed.

It’s especially hard work for you: your left arm doesn’t have full mobility, legacy of a shunt at Reims eight years ago, which put you in a coma for eight days. So awkward is your enforced style – swivelling your locked arm from the shoulder – that designer Tony Southgate has had to cut a hole in the monocoque.

He needn’t have bothered doing that to the new P180, though. It’s been too slow in testing, which means you are stuck with the P160B for the foreseeable future; it’s proved occasionally quick but, as fate would have it, reliable only in non-championship races. Still, if this season has started disappointingly, it is better – way, way better – than 1971.

Louis Stanley: “Our link with Jean-Pierre began when he was accused in the Argentine of the death of another driver [Ignazio Giunti]. I’m sorry to say that the GPDA [Grand Prix Drivers’ Association] didn’t help him. He not only lost his licence but was charged with murder. I offered to defend him and act as surety. It was all very distasteful. Because of this, he had an additional loyalty to us. We became very close and I had tremendous admiration for him.”

The bond you have formed with your team boss is a strong one, for he, too, went through it last year. First, the team’s torch-bearer Pedro Rodriguez was killed in a piffling sportscar race in July; then in October, his tigerish team-mate Jo Siffert was fatally injured in a BRM at Brands Hatch. But the way men like team manager Tim Parnell, chief mechanic Alan Challis, and Southgate have pulled together, and shown faith in your ability, has made you feel welcome.

Parnell: “When we lost Jo most top drivers had already been taken for the following season. But I always felt Jean-Pierre gave us 100 per cent – he was a real racer, a real trier without a doubt. He had a lot of spirit – and he was terrific in the rain.”

Southgate: “Beltoise was the best driver we had in 1972. Peter Gethin would shine on occasions, as did Howden [Ganley], but Beltoise would always be there, though not as good as Rodriguez. At 35-years-old, Jean-Pierre had already dropped a peg.”

Qualifying went surprisingly well, and you line up fourth. Reassuringly, it is clearly no fluke, for as you glance in your mirrors while wending to the grid, you see more Marlboro – the P160B of team-mate Gethin. He’s another little fighter, as his Monza win last year proved. He outqualified you at Silverstone three weeks ago, but which of you kept the pressure on Emerson Fittipaldi’s Lotus 72 all the way to the flag, finishing less than two seconds behind the best F1 car? It was you, Jean-Pierre Beltoise. 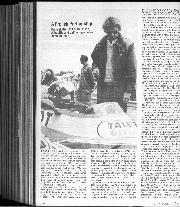 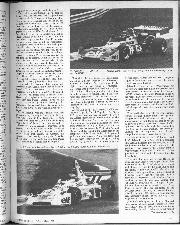 Jabouille & Laffitte: A French partnership that goes beyond F1

From skating to Formula One, Jabouille and Laffite have never been far apart. . . . Twenty-six years ago two young French boys met at a roller skating rink in…

So you are confident you have the measure of Gethin, especially round Monaco, where you fought a great tactical duel with Chris Irwin to win the F3 race six years ago. Since then, you have experienced being paired with a true genius, Jackie Stewart, and discovered he really is everything he’s cracked up to be. But where’s Jackie’s Tyrrell today? Two rows behind you, that’s where. Only Emmo and the two Ferraris are ahead of you.

The spray settles as the pack slows to a crawl. You’ve just experienced what it’s like to follow cars in these torrential conditions – and it’s not much fun. You glance across at Clay Regazzoni, a hard racer from the Jack Brabham School: don’t look in your mirrors, don’t give a quarter. Similar aggressive traits have been noted in your driving, too. This could all end up in a big mess at Ste Devote.

But if you stay out of trouble, it could be very good indeed; you asked the BRM boys to take out the rear anti-roll bar completely. And Alan Challis has been fiddling around at the back of your car, and reckons he might have given you an edge.

Challis: “On the grid, we adjusted the fuel timing on both Jean-Pierre’s and Gethin’s cars. The pump was driven by a belt and, if you had the knowledge, you could take it off and retard it a bit so that the engine became much more driveable.”

The moment’s arrived. You get the revs just so, the clutch is beginning to bite and Louis Chiron drops the flag. Damn! Jacky Ickx has got his power down well. But with the long gearing you’ve been given for the rain, you draw closer to the Ferrari at the top of the rev range. You brake and notice Jacky’s taking the conventional line through Ste Devote. Which means there’s a gap. A flick to the right and you’re alongside. Let the car run wide on the exit. Ickx must have backed off, there’s no thump on the rear. You’re through, and the track in front of you is clean. You hurtle past the pits; they’re going to be pleased to see you.

Parnell: “The pits were down by the harbour that year and, of course, the starting grid had been retained in its traditional place in front of the Royal Box. As team manager, I elected to stay in the pits in case there was any drama on the first lap, so I never saw the start.”

There’s a board out next time, through. Looks like ‘Regga’ is your nearest pursuer, then Fittipaldi. Did Ickx stick it in the fence? Well, Clay should be easier to handle. Five laps later, though, you see the word you’ve been dreading – ‘Ickx’. He’s up to second, and you can’t go much faster – especially now there’s a hazy blur up ahead. Lap seven and you are already hitting traffic. Who had the smart idea of letting 25 cars start instead of the usual 16? This is going to be a long afternoon.

Lap 21 and the board says you’re 20sec up on Ickx. Wahey! So just who is the wet-weather hero?

Certainly not the guy you catch seven laps later; he’s all over the place. He hasn’t seen you. You slither down the inside. It’s Tim Schenken’s Surtees. Your front wheels are alongside his cockpit. He’s got to let you past. Perhaps not. Calm down, Jean-Pierre! Keep it together; there are 50 laps to go. Thankfully, the problem goes away, hitting the Armco with a clanging thud. Could be some debris at Mirabeau next time through.

Lap 35, a dark shape looms out of the murk ahead. It’s a Lotus; Emmo’s fifth, but a lap down. And the board says Stewart is in third place. Too late for Jackie to catch you, even if he was on Firestones. On Goodyears, he hasn’t a hope in these conditions.

Southgate: “We didn’t go Firestone by choice. But at the end of 1970, we didn’t have big sponsors, and we were relying on Dunlop and Shell. Then Dunlop told us they couldn’t give us any money, because Stewart wanted all of it (£125,000, I believe). Come to think of it, I don’t know why we didn’t go to Goodyear.”

Taking it steady now. The rain’s started to fall again, and whatever problems you’re having with backmarkers, Ickx is going to be suffering the same. The rest of your rivals have been put in their place. So, too, have your team-mates: you’ve already seen Gethin reversing (!) his car to the pitlane, and a flash of red and white on lap 48 reveals to be the crumpled remains of Ganley’s P180.

Still, there’s no time to gloat. What’s happening? The car’s trying to get away from you up the straight to Ste Devote. Ease off the accelerator, get it turned in, catch the slide and there’s the answer. Mike Hailwood’s been rear-ended, and he’s left a stream of oil since Gasometer. What is it with Surtees drivers this race? Someone’s going to lose it there, for sure. 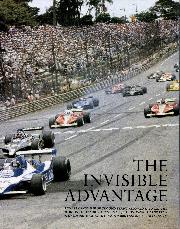 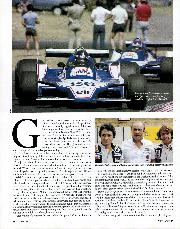 Ligier’s canny use of ground effect allowed it to get the jump on the establishment in 1979, but only for the first few races. Mark Hughes explains the brief supremacy…

It’s not long before you see the first casualty: Regga heaving himself out of a bust-up Ferrari.

And now you’re catching Stewart. Quickly. It feels good to lap a double world champion but his engine sounds rough. Water in the electrics?

Three-quarter distance, you’re ahead of Ickx by 17sec. But what’s that? Your V12 sounds like a vee-nine. You go hot and cold. No, wait, it’s cleared. Miracle. Time to ease back, you’re well ahead of Ickx now. But you can’t help yourself lapping Stewart again.

Then, there it is the chequered flag. A Grande Epreuve at last. The crowd is on its feet, the miserable weather forgotten. You’re the first Frenchman to win here since Maurice Trintignant in 1958; it matters not a jot that your average speed is slower than that set by his Cooper.

As you collect your trophy from Princess Grace, you think about how your brother-in-law Francois Cevert must have felt at Watkins Glen last year. Pretty good, but you wouldn’t swap, you reckon.

You look across at Ickx. He’s probably driven a beautiful race, may indeed have made fewer errors than you over the last two-and-a-half hours. But he committed one cardinal sin that you know of: he left a BRM-sized gap at Ste Devote on the opening lap.