What’s it about Bentleys gets into the blood? I’m talking of proper Bentleys, of course – those built under the auspices of Walter Owen himself up to 1930. A 1930s Derby car is a superb machine, and who wouldn’t like to waft around in a Continental GT, but there’s something in the throb and heft of those early Cricklewood cars that infuses through the driver’s seat. And once there it gets passed on to the next generation.

Take the Morleys. Maybe you remember the thunderous Napier-Bentley that lit up VSCC races in the 1980s and ’90s, its 12 exhaust stubs firing like mortars in three different directions from the W-layout cylinders. That was Peter Morley’s doing, just one aspect of his Bentley-focused passions, which he passed on to his son Clive and Clive passed on to his sons James and Stuart… And at times they’ve had all three generations on the grid at once.

I went to the Morley farm in Essex to meet this family racing for so long behind the nickel-plated radiators bearing the winged B. The family quartet of green machines are posed outside for our photographer, but first we all assemble indoors to look at old pictures, and talk vintage racing. 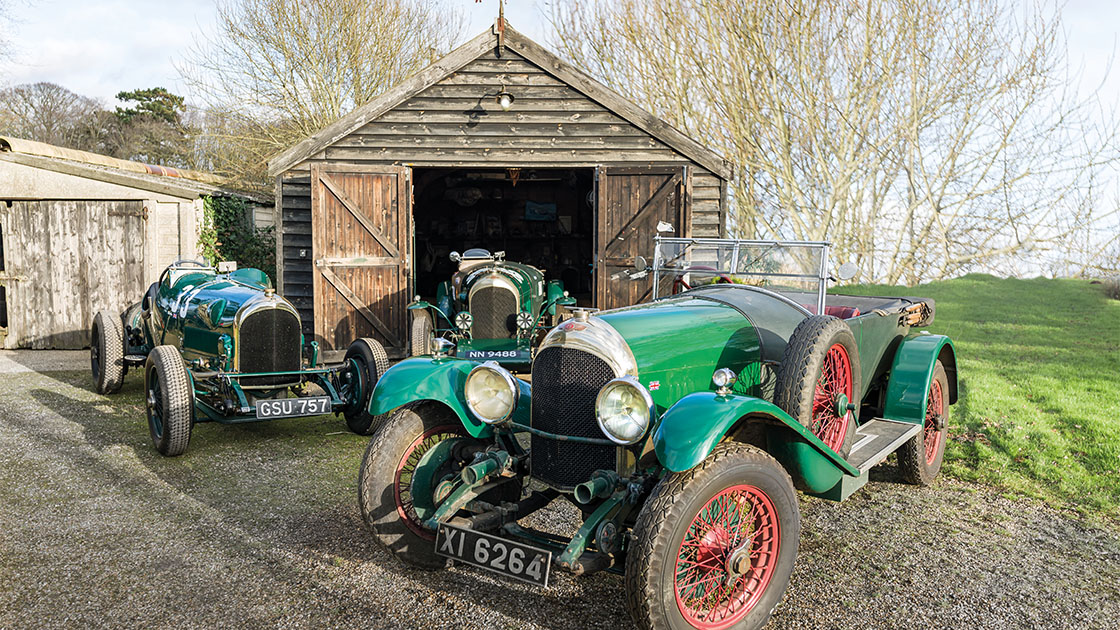 Three racers: any of the trio is likely to appear in any suitable race with a Morley on board

At 87 Peter Morley is a spry, ruddy-cheeked figure, dressed in country clothes instead of the racing overalls I’ve only seen him in before. It’s not that long since his last race – aged 80.

There are several albums of family photos and Peter dives in with pictures not of Bentleys but of Tim Birkin’s Maserati 8C 3000, because that’s the car his father Fred raced. Yes, that’s actually four racing generations of Morleys, but confusingly his father started racing cars after Peter did.

“He raced dirt track bikes at Brooklands before the war,” Peter says, “but he only started in cars after me.” That was in 1953, when Bentleys were 10 a penny – a couple of hundred pounds would buy you a good one – and sometimes 20. Clive tells the tale: “In the ’50s Dad heard the chassis of Old No7 [1927 Le Mans winner] was in a breaker’s yard that was closing down. It was so bent he didn’t want it. Instead his brothers and father
put in 70 quid each and bought several truckloads of Bentley parts, enough for about 20 cars. When Dad moved from the Enfield farm to this one we’d pile chassis on top of each load of pig food that came down to save transport costs. I can remember chassis crammed in the cowshed rafters and the granary loaded with crankcases, axles and engine parts.” A goldmine today; back then, just useful spares. 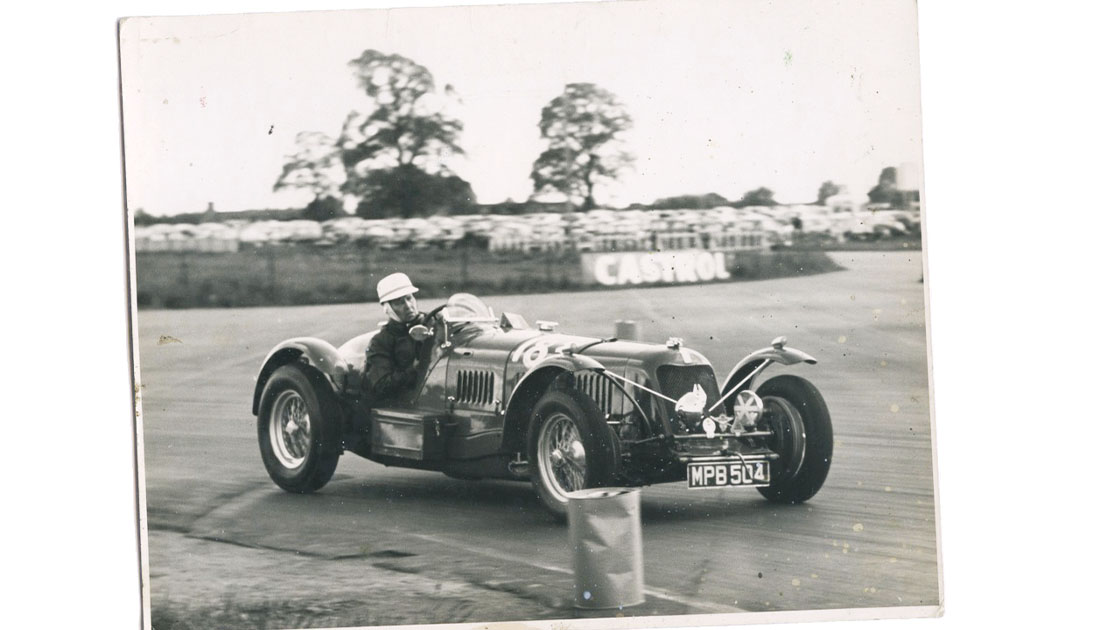 After racing a 3-litre, Peter had in 1956 bought an 8-litre and was racing it regularly. Fred too had gone Bentley. In 1961 he bought the Pacey-Hassan 4½-litre Brooklands Special, by now in two-seater form, but Peter took it over in 1965 and turned it back into a single-seater. “I built a new body from Pacey’s original drawings,” he says. It wasn’t his only project in those days when old cars were just old, not historic: “A chap gave me two 8-litres. They were rough but at least they were saved. We had the space to store them and the lorries to move them with. Do you know,” he adds, “Thomson & Taylors had the Pacey-Hassan, Bentley-Hassan and the Napier Railton all for sale at once. You could’ve had any one of them for £200.”

In just six months Peter built up from parts an 8-litre special in a 4-litre frame. He wasn’t alone: he pulls out another photo from Silverstone in 1961 showing him with his two brothers and their three Bentleys – his 8-litre, John’s 3/4½ and Charles’s Speed 6. It was clear which way the wind was blowing.

But 8 litres was not enough for Peter; in 1971-72 he and David Llewellyn, of another Bentley dynasty, set about building a special that really was special. “I came across a Napier Lion aero engine crated and unused, originally intended for a motor torpedo boat,” Peter remembers. He paid £25. He first slid it into the chassis of the Sunbeam Tigress but its light frame and pre-selector box were too fragile so he and Llewellyn assembled a frame from Bentley 4-litre side members. “We had to fit a hefty subframe to cope with the torque – it was strong enough to flip the car over standing still!” Despite 580hp and a wrenching 1250lb ft of torque, a standard Bentley C gearbox copes. With 24 litres and bulldozer pulling power the new Napier-Bentley could smoke its tyres at any speed. I can remember seeing flames flickering round the wheels as Peter accelerated past the cottage at Cadwell Park. Luckily, the VSCC likes specials, and the N-B brought Peter much success including the Itala, Boulogne and John Holland trophies. Since then aero-engined hybrids have taken off, but it was this machine that relit a flame which last flickered at Brooklands. 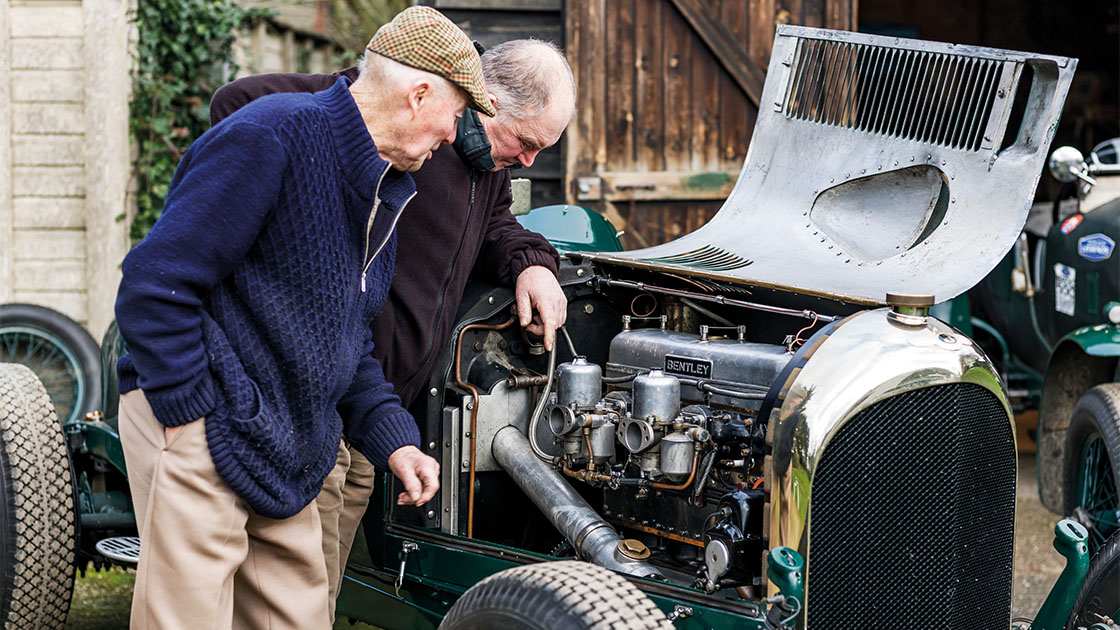 Peter and Clive double- checking under the bonnet of the 3/41⁄2.

The monster roamed afield too. “[VSCC secretary] Peter Hull invited me to join an all-ERA race and I beat them all. I took it to Brighton speed trials as well. I could just leave it in top gear, drop the clutch and still beat the F5000s,” Peter smiles.

He ended up having three crashes in the leviathan, and after the worst one it was rebuilt with an altered body featuring a nose similar to the Napier-Railton, its spiritual predecessor. Finding a photo of the huge vehicle being loaded into a farm truck by a digger reminds him. “Dad transported the Maserati in a cattle truck!” Today the racing Morleys have a motorhome furnished with comforts that would have astonished Fred.

Eventually after 25 years’ enjoyable racing the N-B moved on to Chris Williams. Peter, though, continued to race his replacement Bentleys, a 3-litre Van den Plas and a 3/4½, until he was 80. By then he knew that the cars and family name would be a regular sight on entry lists. Inevitably his son Clive was quickly in behind one of those big four-spoke steering wheels. “I’ve been going to race meetings since I was a baby – sometimes sharing a pram with Tim Llewellyn!” That was some time before they became friendly rivals on track.

Joining the BDC in 1989, Clive built up a 3-litre and won his first handicap event. He raced that car for a decade, taking it to Le Mans Historique and competing hood up in that Goodwood all-Bentley event, but adds, “it was a family and school-run car too”. Of course, by family car he means debut racer: son James had his first race in it in 2006. 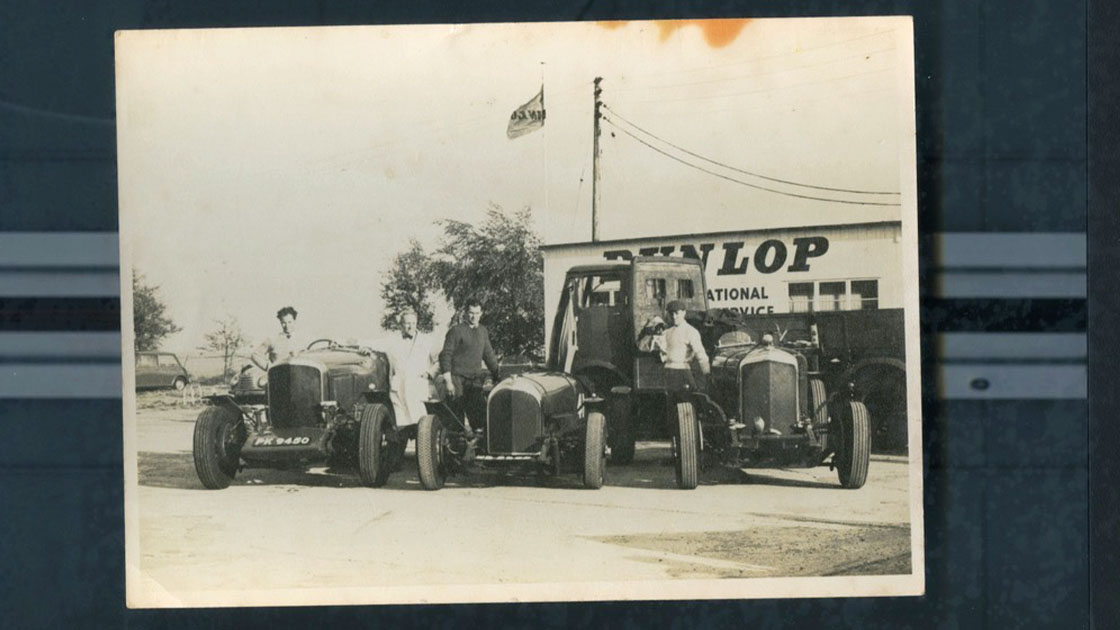 It’s currently being refettled (hence it’s sidelined from the photo trio), but I’m willing to bet the family has the same thought in mind. “We had all three generations on track at BDC Silverstone in 2007,” says Stuart, “and we were all competing, not just rumbling round at the back. My dream is in time to race against my son or daughter.” And very likely in the 3-litre.

Still, you can’t race the shopping car too often, so in 2008 Clive bought a 1926 3-litre two-seater equipped with the 4½-litre four. It soon brought him more trophies. “It’s very light and a joy to race,” he says. It’s not just VSCC events: Clive has scored victories at AMOC meets and a team win at Spa Historics. In 2020 he was declared the BDC’s Driver of the Year after a fine win in a soaking AMOC St John Horsfall Trophy. It’s not been without its price: at Silverstone in 2015 he touched wheels with another car and rolled. He shows me the scary video, listing the damage to every part of the car, even the crankcase. “It took me a year to rebuild it – I was stripping it while in a wheelchair – but I won my first race out in it afterwards.” He almost forgets to mention the 10 days in hospital and a leg full of steel. 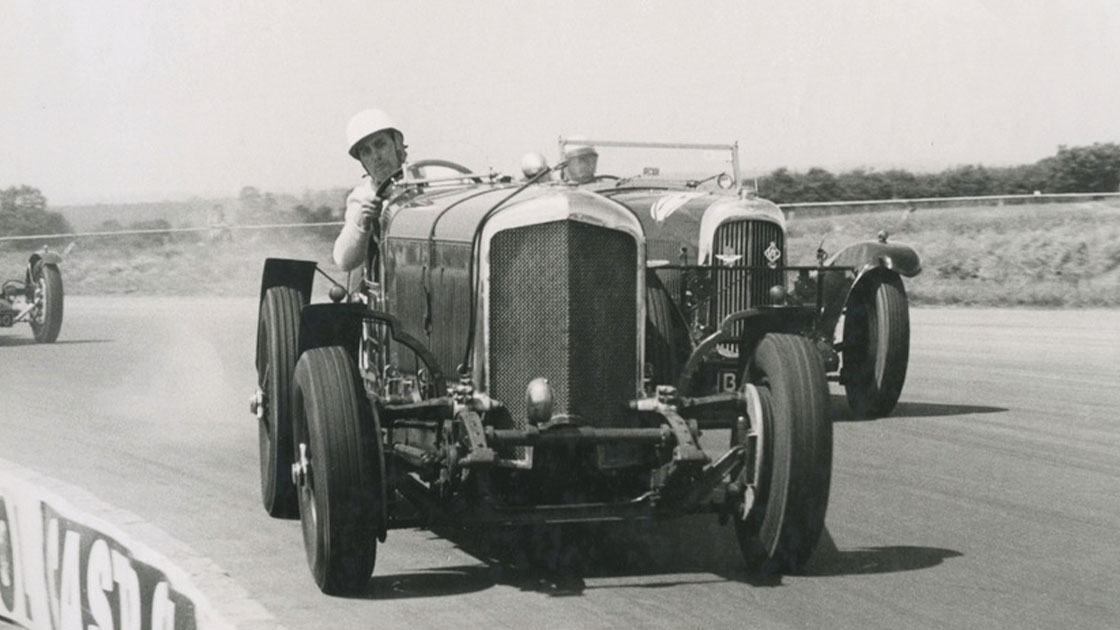 Silverstone 1961: Peter aims his 8-litre at the apex of Copse

But he had a rule for his sons James and Stuart: “I didn’t allow them to race until they got their degrees.” Stuart now works in finance in London, James farms near his father, but the whole family collects for racing weekends. “Historic racing, and especially VSCC, has such a lovely atmosphere,” says Clive. “That’s one of the reasons I enjoy it so much. Anyway, I couldn’t afford to go modern racing!”

Stuart echoes his dad’s thoughts. “I’d love to race GT3 but it’s too costly.” But he and his brother look further afield than Cricklewood: they raced their MGB in the Spa 6 Hours and lately a ’65 Chevy Corvette, ex-Modsports. “I drove it with Derek Bell at Goodwood, but my favourite thing is sharing it with Dad and James in a long-distance event like Spa 6 Hours.”

They all love Motor Racing Legends events too – “the perfect arena,” Stewart calls it.

They like being together on track: “We give each other extra room,” says James. “And I take all of it!” Stuart chips in. He also sometimes shares Richard Hudson’s Lister Knobbly, so they’re not blinkered – it’s just that Bentley headlights shine brightest for them. He and Hudson won the VSCC Bentley Centenary race, and currently Stuart is assisting Bentley Motors fine-tuning the splendid toolroom copy of Tim Birkin’s Blower.

The other cheerful rivalry is that other triple-Bentley dynasty, name of Llewellyn.

“Dad raced David Llewellyn,” says Clive, “I raced Tim, and James and Stuart race Ollie. “But with my grandfather [that’s Fred – keep up] we’re one generation ahead!” 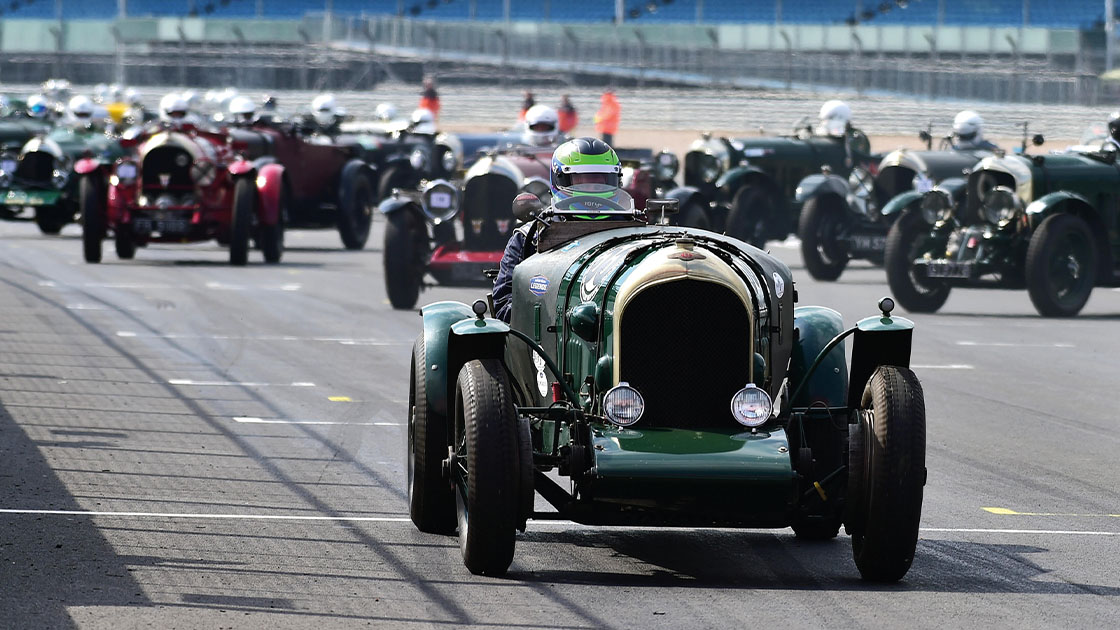 James in the VSCC⁄Benjafields Bentley Centenary race in 2019. He came third, Stuart won, while Clive retired

In a workshop crowded with crank cases, cylinder heads, race laurels, gaskets and wheels I spot a helmet on a dusty shelf. “That’s my dad’s,” says Peter. “Been up there for years.” I can see it’s the one Fred is wearing in the Maserati picture. They set to work fetching it down and cleaning it up for a photo resting on ‘NN’, Peter’s 3/4½, now raced by Fred’s grandson and great-grandsons.

“We’ll never stop racing Bentleys,” Stuart muses as we watch the helmet being posed in different ways. I believe he means it.