THE SECOND STORY TO BE SELECTED IN OUR JOHNSON MOTOR COMPETITION.

THE droning snarl of a racing outboard echoed across the lagoon, through the palmtrees, and across the Pacific, extending in rolling monotony round the small island of Pakito.

Tony Melville was practising on “The Hellcat ” for the Grand Prix de Pakito, to be run that day over fifty laps of the half-mile circuit. A fellow-student of marine biology, Jack Fothringham, was tuning the motor of his “Whiskey,” the only other outboard within 500 miles and consequently his sole opponent.

The course ran along the lagoon, round a petrol-tin and out to sea through a narrow opening, then to seaward of a coral-reef before running into the lagoon again. This leg required careful handling because, even on a calm day, there was a line of surf creaming over the reef. The starting-signal was given by an excited Kanaka and the racing shells stood up under the hard acceleration of well-tuned motors. Jack, on the inside, was first round

the buoy and finished the first lap with a ten yard lead. This he held for twenty laps until “The Hellcat ” slipped by as ” Whiskey ” skidded wide on the buoy.

Then he started a determined effort and in ten laps drove ” Whiskey ” by on the run in through the mouth of the lagoon. This flustered Tony, who began to corner wildly and soon he was 100 yards behind.

He had nothing on ” Whiskey ” in speed and could not gain on the corners so he decided to take a closer course along the seaward side on the reef. Tony had looked dangerous before, now he seemed suicidal. The outboard was banged about in a sickening way on the fringe of the surf and lurched dangerously near the points of the reef. Somehow, Tony held it and actually made up a few yards. Thus encouraged, he tried to improve his laptimes still further and his turn into the open sea became horrible to watch. Disaster came suddenly. “The Hellcat,” bouncing and leaping the

surf, swerved inwards and hit the reef. The impact was terrific and Tony was thrown onto the coral. Jack looked back and saw his opponnent lying limply, half in the water. Then he saw something which brought ” Whiskey ” screaming round in a hard turn. Two triangular fins were cutting towards the inert figure of the wounded pilot.

” Whiskey ” came tearing across the choppy water and drove straight for the sharks. They swerved off, out-manoeuvered the boat, and darted in again. Jack howled back from a tight turn in an all-out burst and once again the churning screw and strident exhaust turned the sea tigers in the nick of time.

They swam away, badly frightened, and Tony was lifted into ” Whiskey ” and ferried to the shore.

So the result of the Grand Prix de Pakito was a broken leg for one entrant and a bad scare for the other. And somewhere, washing about on the floor of the Pacific, is a perfectly good outboard motor. 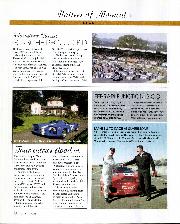 The biggest-ever gathering of Group C Porsches will be one of the major features at the Silverstone Classic on July 28/29, marking the 25th anniversary of the debut race of… 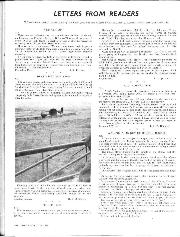 Heard but not seen

Sir, The enclosed photograph was taken on Saturday, April 29th, and shows the view now available from seat 48 of Row 13 in Block A of the South Grand Stand… 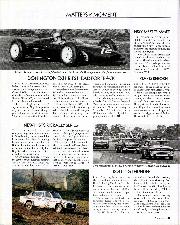 The first Lola Grand Prix car will be back on track this season, after 31 years in the Donington collection. Chassis BRGP41, which John Surtees drove for the Bowmaker team… 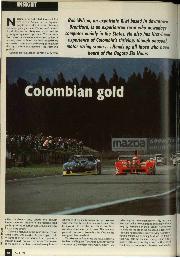 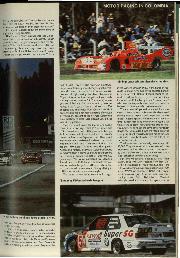 Rob Wilson, an expatriate Kiwi based in downtown Brentford, is an experienced racer who nowadays competes mainly in the states. He also has first-hand experience of Colombia's thriving, though unusual,…