The 1960s were a golden age of touring car racing. From Jim Clark delicately three-wheeling a Cortina around Paddock Hill Bend, to American ‘Yank Tanks’ rumbling around Oulton Park, the images conjured up by the early days of both the British Saloon Car Championship and European Touring Car Championship just get better with age.

And, while Alfa Romeo is busy putting the finishing touches to its new £153,000 Giulia GTA –a muscular 533bhp brute – we all know that moniker truly belongs to a far more subtle car.

In 1963 Alfa unveiled the jewel of its Series 105 models, the Giulia Sprint GT. This car was based around a shortened chassis from the Berlina and clothed in a svelte body designed by Giorgetto Giugiaro of Bertone. It was pretty from virtually any angle, with its bonnet’s distinctive leading edge shading the headlamps, and the tapering lines of the body shape giving it a sit-up-and-beg sporting vibe.

Early sales were respectable, but in a world where bucketloads of Cortina sales were chalked down to circuit racing successes for Clark, John Whitmore and co, Alfa needed to take the Giulia racing to really prove the model’s potency.

To do that it contracted Autodelta – the relatively new company formed by ex-Ferrari engineers Carlo Chiti and Lodovico Chizzola, which Alfa had absorbed in early 1963 to become its own in-house competition department. And that partnership was cemented with the creation of the GTA.

Just 500 bodyshells were handed over to Chiti and crew, with the simple brief to make

the car into a Cortina-beater. They started by stripping all the weight they could. All steel body panels were gone, replaced by lightweight aluminium ones – hence the A for Alleggerita, or ‘lightweight’, in GTA – thinner gauge metals were used inside, the wheels were magnesium, the windows were plastic and even the original door handles didn’t survive.

Out went the road-going 1300cc engine, and in came a 1600cc twin-cam fed by twin Webers to produce 170bhp, and the gear ratios were closed up and designed for fast shifting. The finished package weighed just 740kg.

Upon its launch in 1965 the Giulia GTA was already a head-turner and, after a season of tweaking, came good in 1966, beating the Cortinas to the ETCC Group 2 title two years on the trot in the hands of Andrea de Adamich, before adding a third crown in 1969 with Spartaco Dini driving. Toine Hezemans then lifted the 1970 European title in a 2-litre version. It was point proven for Alfa, and for Autodelta, which then convinced the brand to head into sports car racing. We have a lot to thank the original GTA for. 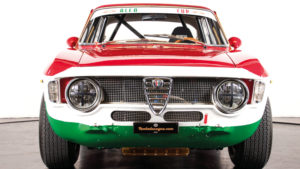 A stunning example, driven by de Adamich recently for filming.