Asked in Baku why he hasn’t done a track walk since 2017, Max Verstappen replied, “I can’t be arsed. If I need to learn anything about the track, I just do my out-lap more slowly. I’d sooner have the extra time in bed.”

Daniel Ricciardo in Baku: “If you’ve jumped off the Ricciardo train, it’s ok, it’s still going forward, you can still get back on it. There’s tickets.” He suffered another disappointing weekend, qualifying seven places behind McLaren team mate Lando Norris and finishing four places behind in the race.

Ferrari has chosen the more ambitious of its two development projects for its 2022 power unit, which will be the unit used until the end of the formula in 2025 or ’26. Big gains are believed to have been made in combustion and the electrical energy systems but the architecture will continue to be based around a combined turbine/compressor. There had been speculation that this engine would follow the split turbo route already used by Mercedes and Honda. With Alpine set to switch to a split turbo next year, it would leave Ferrari alone in using the ‘conventional’ architecture. 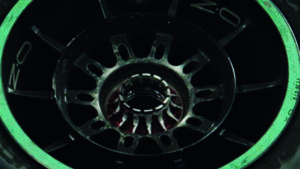 The Singapore Grand Prix has been cancelled for a second successive year because of Covid, following in the ’21 footsteps of China, Canada and Turkey. Questions remain about the Japanese, Mexican, Brazilian and Australian races. A second race at the Circuit of the Americas has been mooted.

Post-Monaco Ferrari tried to help Mercedes in removing Valtteri Bottas’ front-right wheel, but even its best crow bar and chisel failed to do the trick. It was eventually removed back at the factory 36 hours after Bottas pitted, making for probably the longest pit stop in history.