AN OUTBOAR 1) RACING FILMG THE “SPEED DEMON” SHOULD NOT BE MISSED.

WITH an air of resignation, we bade “good afternoon” to the manager and paid for our seats. The film had just started. For some moments the struggling boat builder had been talking to the rather ” green ” hero when round the corner danced the boat builder’s pretty daughter. I pleaded with my two colleagues. “What if they had seen the plot before ? ” ” Hadn’t we come to see the racing shots ? Well, then ! “

Here the fatherly boat builder hands him an Elto propellor for use on his “Johnson 16” and the scene draws merrily to a close.

During the lunch interval, however, the hero is trapped into drinking an almost invisible cocktail and becomes completely ” blotto ” As you may have guessed, he turns over in the race and the boat builder and his daughter are annoyed.

The hero is then transformed into a tramp and rescues a little boy from drowning. Adoption of the boy. At bed time the hero decides that the boy ought to say his prayers, and here follows one of the best scenes in the film. “Isn’t there something you do before you go to bed ? “

asks the hero. “I did it,” says the boy innocently. My colleagues decided to see the film through, “just in case.”

After some “rum running” and a brush with the police the hero turns up late for the big race and takes over from the boat builder’s daughter.

Instantly the rather sulky motor is transformed into one of the most amazing “Johnson 16’s” ever seen, and he wins the race.

Although the usual rather hackney story is employed, this film should help to make the general public “speedboat minded” for the racing shots are really fine.

Well worth a visit ! 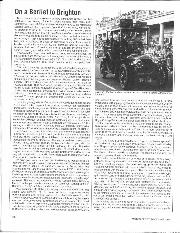 On a Berliet to Brighton

November marked the 90th anniversary of the Emancipation Run that celebrated the freeing of the horseless carriage from many petty restrictions. Since 1927 this has been commemorated by the veteran… 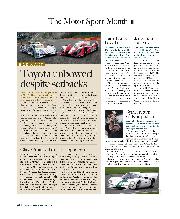 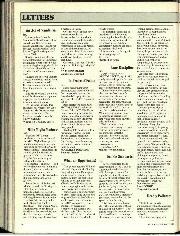 Sir, I have several friends and relatives living in the USA and Canada, where they had that ridiculous speed limit of 55 mph, brought in 10 years ago because of…

Heavenly Max and the patience of a Sainz: F1 in Canada, Britain & Austria