IN an article in “The Autocar” of December 27th last, Mr. Edward Castellani suggested, under the heading “What is Wrong with Motor Racing?” that racing could be made more popular in this country than it is if speeds were reduced so that shorter, more tortuous circuits could he used, and a “circus” atmosphere introduced. He considers that to organise races on lines which place in order of importance first the cars, second the manufacturer, third the driver, and last the spectator, is quite the wrong means of drawing the public, and he urges that race organisers and drivers “play to the gallery.” His theme appears to be to slow up racing and turn it into a circus to make it a “national institution like cricket and soccer and horse racing,” and then to develop it “on the proper lines.”  We do not like this theme. There is so much to be said for “the right crowd and no crowding,” even if not interpreted in quite the Weybridge manner. Before the war Nazi Germany, Italy and France staged races which most certainly put science before the circus, and often staged them over fast, long circuits at which spectators had to be kept well away from vantage points on account of the speed of the cars, while often only a small field was entirely dominated by one marque. Any individual interest was national and not of the “local partisanship and local patriotism” which Mr. Castellani feels is so sadly lacking in motor racing, while these Grand Prix cars had surprisingly few gory accidents or phenomenal avoidances despite their performances.

Yet tremendous crowds inevitably watched these races. Big crowds attend motor racing in countries in which private motoring is properly fostered. In a country where car owners doodle along at 32 m.p.h. in town and country alike, in the middle of the highways and byways, pondering on having to pay £10 a year in basic taxation alone for the privilege of running the humblest of cars, they are not likely to drive good vehicles, or mend their own punctures out of sheer respect for good machinery temporarily disabled. So they will not universally flock to see better drivers handle very good machinery or enthuse over pit work which gets on a new wheel in half a minute. The “circus element” may appeal to such persons, but if it gives rise to enthusiasm for the sort of thing described in the following extract from an American Midget Racing paper, we may well be thankful that race organisers in this country, while bewailing small “gates,” do put Science before the circus and adhere to the doctrine that properly-constituted races improve the breed. We would congratulate Mr. E. Hawkesworth, of Derby, on sharing our views and putting his points before Mr. Castellani in a letter published in “The Autocar” on January 10th.

The article suggests the curious outlook which “circus-tactics” appear to encourage, appeared over Bob Bonnie’s name in “National Auto-Racing News” of October 17th, 1940, and reads as follows :—

” . . . The sun shone brightly on Safford Speedway Sunday, Sept. 29, as thousands of speed sport fans assembled to witness one of the most thrilling events ever held at this park. Many of the favorite, top-notch drivers were on hand for what promised to be a real speed feast.

‘shooting the works.’ In the first lap of the second race Earl Horne and Red Page locked wheels and crashed the fence.

“I stayed at the bottom turn despite this, sort of feeling that if I stayed there I’d be rewarded. So I stayed. The next two events went off okey-dokey with thrills, but no spills.

“George Flint, an old acquaintance of mine and also a speedway shutterbug, and I, still stayed on the bottom turn, hoping that we could expose some film to be of interest to you. We were chewing the speed fat when a thundering roar told us that a fourth race was green flagged. About the sixth lap our shutters clicked simultaneously to take in Charlie Anderson bustin’ down the inner guard rail in fine style.

“I immediately ran to the smashed car and shot that from several angles and by this time about a 150 crash-crazy fans were surrounding the wrecked car. I decided to snap a shot of this and to get in the clear. I got about 50 feet from the car, next to the inner guard rail, where it still was. I put my camera into action only to hear “Look out!” I spun around and looked straight into the grill of Chet Conklin’s No. 7 coming at me, but fast. I don’t know how it ever missed me, but I do recall giving a split second dive to the ground and getting covered with dust.

“That wasn’t enough—a length of guard rail ‘gone with the wind’ knocked my camera out of my case. I quickly recovered it and got back in the game from a horizontal position. While lying on my stomach I ‘shot’ Conklin going right into the center of the crowd, throwing people this way and that and taking some with him for company. He scored a bull’s eye by hitting Anderson’s car, then slid over and stopped.

“I had all this recorded in my little speed camera. For five long years I spent every Sunday at a speedway, but never got such a lensful as this.

“What interesting pictures these would b ! The expression on the faces of the many fans as they saw the speed wagon bearing down on them, then a picture of the crowd flying in all directions at once, falling over one another, screaming, and next the car on top of them before they could avoid it, then the car climbing over the other one, then lastly, the sickening picture of the car being lifted off two children as a third one came crawling out of the side. . “

If the writer really enjoys sights of this sort, we suggest he could be usefully employed in waging warfare on the Nazi, as young men are doing in this country, whether they like what they experience or not. 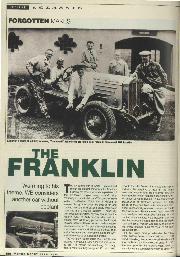 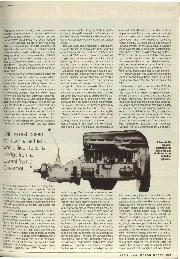 Warming to his theme, WB considers another car without coolant The air-cooled car to which I referred last month but did not name was the American Franklin, the most successful…

Ferrari's finest F1 cars 3rd - 312T Even if he'd never designed anything else in his career, this car would mark out Mauro Forghieri as one of the all-time greats.… 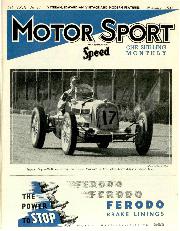 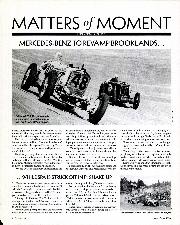 ...While Spa is struck off in F1 shake-up

Spa-Francorchamps has become a casualty of the tobacco war and has been axed from the F1 calendar. The Belgian government has insisted that tobacco advertising must be removed for 2003, three years ahead…