The first Alpina I drove was a 3 Series-based like this one, and I broke it. It was 1988 and it was my job to record its acceleration. The problem was that with an optional automatic transmission it was unable to spin the rear wheels. I had the bright idea of revving the engine to 5000rpm with the gearbox in neutral, then wrenching the selector into drive. Remarkably, it tolerated such behaviour twice before there was a bang followed by a cessation of forward progress.

It’s probably why I remember the car so well, and I mention it now only because I found it striking how similar the philosophy was behind the car then known as the C2 to that which underpins this brand new B3. Not that you’d know it from the numbers. Today’s B3 has 456bhp from its twin-turbo 3-litre straight-six motor, far more than double offered by the C2’s normally aspirated 2.7.

Back then and even with such unforgivable hooliganism, I could not tempt the C2 past 60mph in less than 7.3sec, not much less than double the time it takes today’s B3. Most shocking is that today’s B3 is 537kg heavier – that’s a Caterham Seven right there – than the C2 of yesteryear, though its top speed of 186mph is 55mph more than I’d flogged out of the C2 before I destroyed it.

And yet the subtle body kit, the smooth ride, the discreet interior, the absolute determination to not try and be a BMW M car by another name are as much part of the Alpina value set today as they were 33 years ago. It is a formula the decades have not wearied at all.

Now as then Alpinas are different. Talk to its boss Andy Bovensiepen and he will tell you he’s happy for production to be maintained at 2000 units per year, meaning that only one in every 1000 BMWs wears the Alpina badge. They are rare and absolutely not for everyone.

If, for instance, you want your high-performance BMW to deliver a monstrous bang in the back, speak with a loud voice and respond aggressively to every turn of the wheel, you have knocked on entirely the wrong door. Everyone will compare the B3 to the forthcoming M3, and it is instructive that despite using the same engine Alpina has tuned it to produce both less power and more torque than it will have in the M3.

At least at first, the B3 doesn’t feel as fast as its numbers suggest but that’s because its torque arrives evenly and elastically across a broad powerband. No need to toggle down into a lower gear or wait for the lag to subside: with smaller, low-inertia turbine wheels inside the same turbo housings, the B3 responds as you would hope a normally aspirated V8 of double the capacity might.

Interesting too is the fact that instead of adding ever more sporting settings for the selectable drive modes, Alpina goes the other way and offers instead a Comfort Plus option you’ll find on no other BMW. Frankly, I’m not sure why you’d go about your daily business in any other mode: despite the 30 per cent profile of its Pirelli tyres, the B3 rides well.

If you like what you’ve heard so far, you need to know that exclusivity of the B3 now extends to ruling out customers who’d like rear-wheel drive or a manual gearbox. Though the hardware to make all combinations possible, with such a small number of cars being built the demand to justify homologation costs for an Alpina application does not. It’s a shame because the auto and 4WD hardware add a lot of weight, leaving it at 1865kg, and also detract from the driving experience. The two-pedal transmission is as good as you could expect a conventional torque converter auto to be, and maybe a swifter, sharper double-clutch arrangement would compromise the B3’s otherwise beautifully languid gait.

The handling certainly suffers for directing the torque through the front as well as rear wheels. The car feels taut and together most of the time and the strange thing is that it’s not as if it won’t still oversteer: in the fairly grim conditions I experienced, it was no trouble at all to cancel incipient understeer or even slide it out of a corner. It’s the feel that’s been compromised: that sense of always knowing where the nose is going that I’ve felt in rear-drive Alpinas is still there, but less distinct. It made me less confident about pressing on when the roads were wet, which is the opposite of what four-wheel drive is meant to do.

We should, however, not get too caught up in this. For everyone most of the time, the B3 handles well enough and perhaps the road warriors would always go and buy an M3 anyway. But it’s worth pointing out nonetheless. 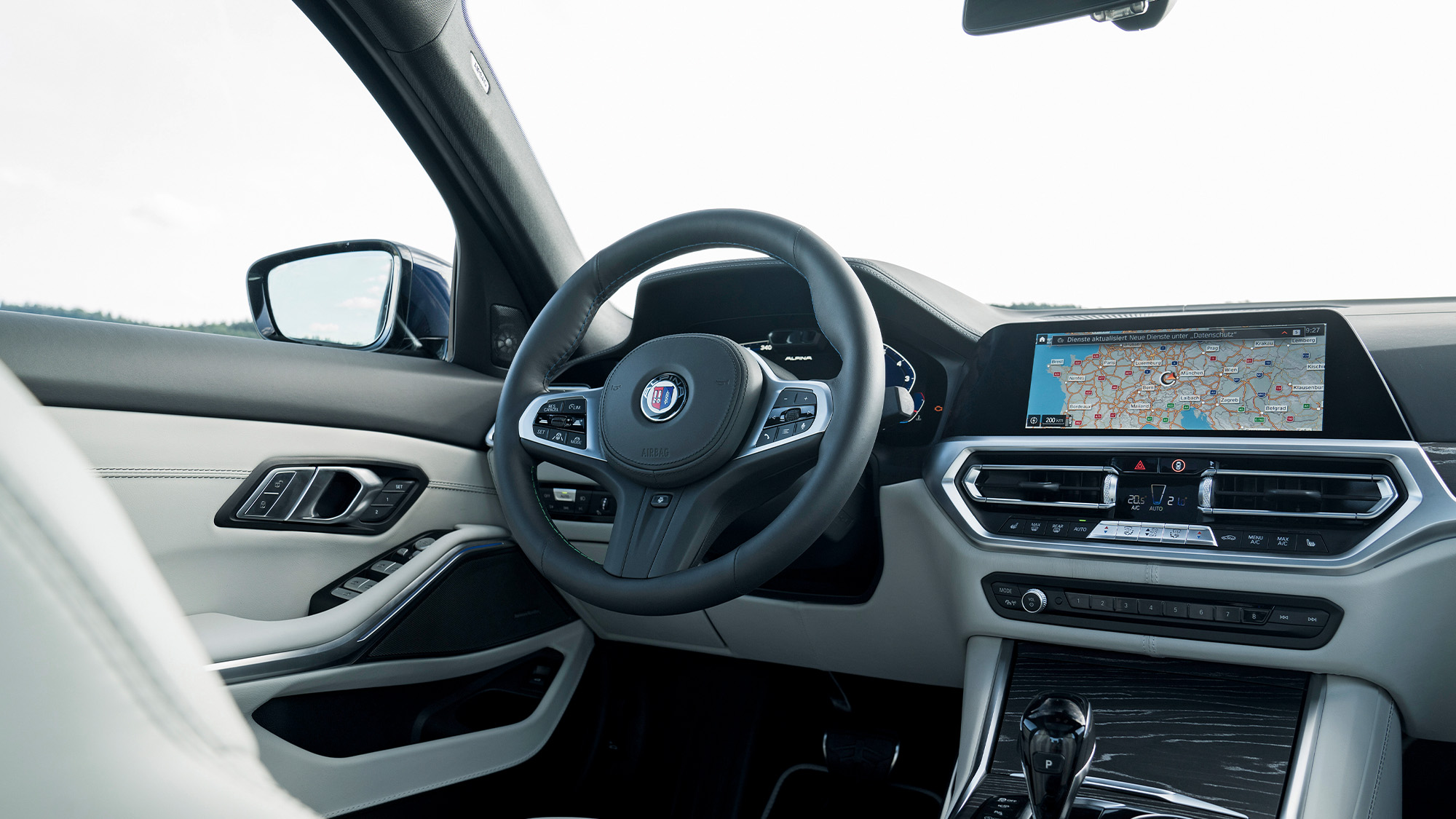 Otherwise the B3 is precisely what you’d expect from the Buchloe-based brand: a take on the high-performance BMW that is expensive, discreet and quietly capable. I’d probably go for the diesel D3 S which is still available, because that has even more torque and, of course, a longer range.

This B3 will have to work far harder than any of its forebears, because until now it has always been the only high-performance compact BMW that’s been available in estate or Touring configuration. No longer: with the M3 saloon and M4 coupé and convertible will come BMW’s first ever M3 Touring. Even so and as things stand, the B3 is so capable that it is its new in-house opponent that will go into the contest with everything to prove.