Nowadays every press release we receive insists that the firm concerned wants to be ‘disruptive’. It’s the standard cliché for every slightly different idea being promoted. Audi, though, genuinely merited the description when it launched the Quattro onto the world rally scene. With one machine it bulldozed the sport into four-wheel drive, mad turbo boost, double-clutch sequential gearboxes and a series of ever-more lurid homologation specials which finally killed the Group B era. Rallies would never be the same afterwards, and today 4WD is just another box to tick on your options list.

Since its introduction in 1980 Jeremy Walton has been fascinated by the cars and their technology (he describes himself as a Quattro zealot) and as a road tester, car book author and racer himself is well placed to relay both the competition story and the engineering that made it possible. For many years he provided Motor Sport’s road tests, too, appropriate as the book naturally covers the road-going versions of Audi’s groundbreaker. Its main thrust, though, is competition, whether on dusty forest tracks, the smooth Tarmac of American IMSA, or the mad uphill frenzy of Pikes Peak. From unpromising bones, with an engine hanging out in front like the head of a club, Audi’s brawny brainchild proved staggeringly adaptable.

Analysing the origins of this left-field idea Walton credits Ferdinand Piëch for green-lighting it, but gives all the engineers their moment – a handful of people we’ve never heard of but who saw the potential when a VW Iltis – an unsophisticated lightweight ‘jeep’ – proved quicker than 2WD rivals over muddy going. Hannu Mikkola was impressed enough by their 4WD 80 mule clambering a soggy slope to sign up for the ’81 season, having never even seen the rally car. It’s one of the many quotes Walton has gathered in a range of interviews over the years, which add insider detail – for example, that a senior manager said of the required homologation run, “Who can sell even 400 such cars?”

Before getting onto its competition career there is some meaty detail about the underpinnings – how components were mixed and matched from the Audi range to help offset the development costs of a new approach to permanent four-wheel drive, made possible by a centre differential and the ingenious system of having the forward prop shaft rotate inside the gearbox layshaft to provide drive to the front diff. (Mind you, Lancia got there first.) With only loose change to spend on the way it looked, it is amazing that designer Martin Smith managed with some glassfibre add-ons to transform the bland-looking 80 coupé into the hunk of a car it became.

Among the generous photographs, useful inserts add facts on people and topics, including the name – for a while there was a danger it might be called Carat – plus the debate on whether to go big Q or not.  (I distinctly remember an early missive from Audi HQ explaining that the big car was a Quattro while 4WD versions of everything else were just ‘quattro’, so I’m sticking with that.)

From the moment Quattro proved its pace as course car on the 1980 Algarve Rally it was clear that having two wheels lazing about at the front just steering was no longer going to bring in the bacon. By the time it took its first win in 1981 in Sweden, rivals must have been wearing down their pencils trying to figure out how to create all-wheel-drive opposition.

Walton has had much direct experience with the Quattro, whether interviewing insiders, investigating engineering, driving both road and rally versions, and sitting alongside the great Audi pilots to experience the car at full chat. He’s not blind to their faults: riding with Stig Blomqvist he “was reminded of the piggy nature of the Sport Quattro in hairpin bends where the engine was reluctant to pull and the front ploughed wider than a drunken farmer”. He has also been able to drive most variants of the rally and circuit cars which won back American loyalties after some bad press. The end result was five US crowns to add to three World Rally championships, and another trio of wins on Pikes Peak which radically boosted the marque’s image stateside.

It’s sobering to be reminded just how many variants that were: not only the long- and short-chassis rally cars and their evolutions, but all the saloons, from TransAm through IMSA into touring cars, with ’90s victories across Europe, South Africa, Australia, and over here Frank Biela’s British title. But the machine that fascinated me here was the 1989 ultimate, the IMSA GTO class 90 quattro – nothing more than a silhouette boasting a fabulously sophisticated aluminium tub and tube frame, a ludicrously powerful version of the long-serving five-cylinder engine hurling out more than 720bhp and vast 14in-wide tyres, all concealed within the bulging arches of a glassfibre lookalike skin that you had to enter through the window like a NASCAR. Hans Stuck took 11 wins in this monster.

My first drive in a Quattro almost ended with me ramming the car I was overtaking through Ashdown Forest; unused to crude early turbo power delivery I planted my foot and wondered why nothing was happening. Then everything happened, and I almost forgot to turn the steering wheel in time…

Although the book mainly covers up to 2004, it discusses Audi’s later competition activities too. Reading this, the conclusion has to be that it was Quattro that began it all. 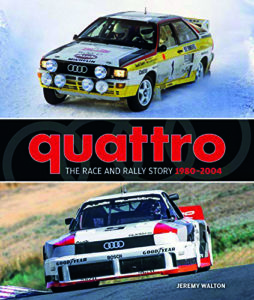