I WAS very interested to test one of the latest machines turned out by the Humber Factory, because the

first motor cycle I ever rode was a Humber ; a 1910 3i h.p. model, fitted with a two speed hub gear and handle starter. I remember I purchased it from a friend, who, having briefly explained the controls, suggested me mounting the rnachine and taking it for a run. I got on and went about 200 yards down the road and then returned, and asked my friend to jump on the back, which he did, and we both went for a long ride over the Welsh mountains, covering some of the worst roads in the district. I knew nothing about motor cycles in those days, and we were very fortunate to return home safely, but from thenceforth I was a keen motor cyclist, although for a time I had to run my machine on paraffin stolen from

the household store cupboard, owing to the low state of my finances. I carried a small bottle of petrol, however, to facilitate starting.

The 1927 model O.H.V. Humber is very different from My old machine, except of course, that it is, like all Humber products, substantially made and excellently finished. The firm of Humber was established in the reign of Queen Victoria, and it is one of the oldest firms of motor cycle manufacturers in existence. It originally specialised in the production of “Penny Farthings” and” Bone Shakers.” My father, I believe, won many races on these early conveyances. Humbers, now as ever; are one of the leading concerns in the motor cycle industry, and they have concentrated their long experience in the production of cars and motor

cycles on turning out the O.H.V. Model under review, and it is undoubtedly a machine of which they can justly be proud.

From the illustrations given of the machine, it will be seen that car type mudguards are fitted, which is a most sensible idea for motor cyclists who are every-day riders, and who cover muddy roads in bad weather. To the rear guard is attached a large handle which renders the lifting of the machine on to its stand an easy operation.

Although there is 260 lbs. of this motor cycle, its weight is not felt once it is on the move. It steers exceedingly well, and really fast cornering can be undertaken with great safety. There is a close ratio gear box fited giving the following :-5.65 to 1 on top, 7.75 to 1 on second, and 11.59 to 1 on first.

Although we did not have a chance of testing the machine all out, we should estimate that it would be capable of attaining about 75 miles per hour under favourable conditions. The maximum speed reached by us was 68 miles per hour, registered by Bonniksen speedometer. During the week we had the Humber on trial, we covered some hundreds of miles over all classes of roads, and found the machine an ideal mount for fast touring, 40-45 miles per hour being easily, kept up with no signs of over heating. The only trouble incurred throughout the whole of our trial, was a broken outer inlet valve spring ; this did not appear to affect the running of the machine in any way and was only discovered by chance when a little cleaning was being performed.

The Humber was much admired by all our friends, and those to whom we gave an opportunity of testing the machine, remarked on the easy gear change which is one of its most outstanding features. The O.H.V. engine is solidly built, and well constructed. It has a bore of 75 mm., a stroke of 79 mm., an M.L. magneto and a B. & B. carburettor are fitted. Other important points about the Humber are the comfortable knee grips fitted to the tank, and well sprung saddle. These kind of accessories go to make a good machine excellent. We should very much liked to have tried the Humber against another make of machine, of a similar type owned by a friend, but having found a suitable road, and being on the point of opening all out we were disgusted to find ourselves confronted by an imposing member of the police force. We therefore decided that we would postpone our test to a future date, but owing to Humbers suddenly requiring the machine back for a trial, we did not have an opportunity of pitting our steeds against one another, although I fancy that the Humber would have gained the day, had we been able to hold the speed test. We have on trial during the course of our work many machines, but the Humber stands out as one of the most

interesting mounts we have had an opportunity of trying recently. It is undoubtedly an ideal mount for the sporting motor cyclist, who wants solid reliability and a good turn of speed at the same time. At the price of 00 the Humber is within the reach of all riders, and we expect to see a great many more of these machines on the road in the near future. The only criticism we have to make in regard to the machine lent to us, is that it was rather inclined to vibrate at a

speed of 35 miles per hour, although this vibration was not so bad at higher speeds. Of course, this is not a very serious complaint, and is undoubtedly due to the balancing of the crankshaft.

It is certainly better for it to vibrate at about 35 than at a speed of about 85; at high speeds, serious vibrations often lead to the complete numbing of the hands, which is very dangerous.

Both brakes on the Humber were really good, and either could bring the machine to a standstill with great rapidity and smoothness.

I think it would be very wise if all motor cycle manufacturers standardised their carburettor controls. On the Humber the throttle opened outwards, and as I had been accustomed, before riding the Humber to a machine with the throttle control opening inwards, it caused me one or two very narrow escapes from sudden death, through opening the throttle the wrong way. Of course, once one is used to either method of control, they are both equally convenient in operation.

I should very much like to have given the Humber a longer period of trial, as I found the machine a most fascinating mount, and although I came up against some very fast machines on the road, I noticed that the Humber could hold its own against most of them.

In fact, many motor cyclists, I think, a little underrated the speed of the Humber whilst I was riding it, much to their annoyance. I visited a local Club’s American Hill Climb which was held at Wendover, and one of the competitor’s mounts having fallen to pieces, I offered the Humber as a substitute, but as I anticipated, although it made an excellent show, it could not climb the steep grassy bank, as the low gear of 11-1 was much too high for a climb of this kind.

On my return from Wendover to Aylesbury, I was chased by two T.T. riders (I should think by the way they hung on to my back wheel), but I managed to reach this famous old town without being troubled by their dust.

In closing I would say that I much enjoyed the opportunity afforded me by Messrs. Humbers of trying out their latest machine, and I must say they are one of the most courteous motor cycle firms in the industry. 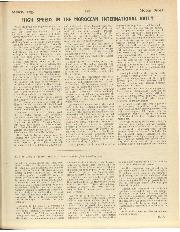 HIGH SPEEDS IN THE MOROCCAN

HIGH SPEEDS IN THE MOROCCAN INTERNATIONAL RALLY After studying the regulations for the Morroccan International Rally, 1935, one can only form the opinion that the successful cars and drivers will… 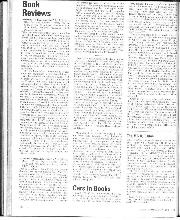 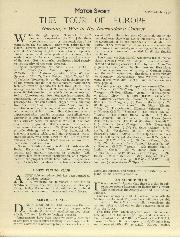 A NEW FLYING CLUB. A NEW light aeroplane club has been formed at Windsor recently. A syndicate has purchased a site for an aerodrome, where the club will operate, at… 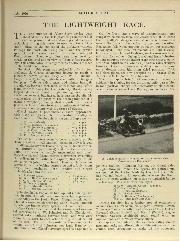 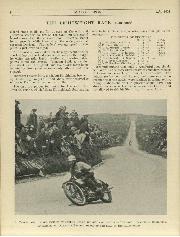 THE LIGHTWEIGHT RACE. THE June number of Motor Sport hav ing been published before the T.T. practising commenced, it is not surprising that several unexpected incidents took place during this…