On June 8th the 750 Club, now under the sponsorship of Capon and Birkett, held a half-day rally at the Ely Hotel on Hartford Bridge Flats. The afternoon was devoted to a simple competition and those present were: Capon’s Riley saloon; Mrs. Cowell’s “1,100” Fiat saloon; Gilbert’s Meadows H.R.G.; Gordon Woods’s Frazer-Nash; Mrs. Birkett’s 1932-3 style Austin Seven saloon with three-bearing engine; Capt. Moon’s “Nippy” Austin Seven; Frost’s Cozette supercharged “Ulster”  Austin Seven; Birkett’s “Ulster” with down-draught carburetter and Alta alloy head, and Mallock’s Austin Seven Special. Lush also attended with his orange T.T. Austin Seven, converted to , down-draught induction instead of Cozette blown the day before. Boddy turned up for tea straight from wartime toil in his “Chummy” Austin Seven and Miss Worthington arrived soon afterwards in her twin-cam Anzani-Nash, still being run in, but fast enough to head the procession, with Boddy as passenger to the Pirbright hills. Here Frost, Matlock and Moon disported themselves on the slime while the Frazer-Nash owners tried each other’s cars. The active members then re-joined the fair sex at the “Ely,” where Lacy’s fine 3-litre Bentley had also appeared. A good party—and another is scheduled for July 6th at the Ashdown Park Hotel, Coulsdon; all enthusiasts welcome. Acting Hon. Sec.: S. H. Capon, 159, Upper Tulse Hill, London, S.W.2. 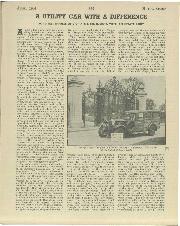 A utility car with a difference

A utility car with a difference