Kathleen Taylor recalls some adventures from the now far-off days when you could buy all the petrol you wanted – with particular reference to the 1938 Monte Carlo Rally. She is now a driver with the London Auxiliary Ambulance Service.

There is a fog – a real “old-fashioned” one, too – and our ambulance is proceeding at walking pace to an “Urgent No. 1”. This is usually the excuse for a spot of fast driving, but to-night, alas, it is a case of stumbling before the ambulance with a red lantern and guiding it by voice.

It reminds me – do you remember it? – of that ghastly freezing mist that frayed nerves and tempers on the first morning of the 1937 R.A.C. Rally. Dorothy Stanley-Turner and I were driving her M.G. Midget (which later that year did so well at Le Mans) and caught the mist en route for Oxford. As I had just distinguished myself by reversing the little car into some iron railings camouflaged by the dark, relations were a trifle strained and our run to Oxford was accomplished in a silence of several degrees below zero. On top of that, the screen had to be folded flat, as we had forgotten to include glycerine in the “black bag” ! We arrived with eyelashes, hair and clothing coated with rime and both looking as old and tired as we felt. Staggering into the Morris Garages at dawn we were greeted, by the petrol attendant, with the bright remark: “Ye’ll be finding it a bit cold driving this morning?”

Dorothy and I turned to each other, shouting with laughter, and peace was restored…

Lots of other “spots of bother” I remembered, as I stumbled along the kerb, hoping I was still in the George Albert Road but sure of nothing. Yet, perhaps, I was sure of one thing – the poetic justice of my having to do for a living that which I had done for pleasure, and considered such good fun, in the past! Having smashed the lamp glass on a post, I was able to see better and began to remember more of the old runs, cars and personalities.

There was that old Ford Eight, which had to have her cylinder-head gasket changed twice during a trial in the Chilterns. Panting and pushing up a hill just before the finish – the engine running in first gear, assisted by two-girl-power, we accepted a tow from the friendly occupants of a passing car. Arriving at the finish, we discovered them to be marshals, and we were put down as “retired.”

Then there was the Anzani G.N. which always shed its front wheels at the critical moment; on one of the Lakeland trials there was plenty of incident. The day was hot, the radiator leaking, and water scarce; the brakes proved to be unequal to the stiff gradients and required re-erecting when the adjust merit became used up; second gear refused to stay in and had to be held; excessive engine heat burnt and inched ignition connections; supplies of chewing-gum and other essential spares became exhausted; plug-trouble, like the poor, was always with us. However, we kept going somehow, until we arrived at a downhill hairpin requiring a reverse. It was there that I stripped the reverse cogs and we were well and truly stuck! The hill was too steep for us to push the car up, but eventually a party of tourists helped us to haul our “scrapheap” out of their way. By that time we were several hours behind the rest of the trial and had to retire. Our troubles were not yet over. The 50-odd miles that separated us from home were crammed full of incident. The petrol pipe from the main gravity tank broke and we had to run on the reserve – once the oil tank– which held half a gallon. We had to replenish by draining from the main tank into a thermos flask, but this soon blew up with a noise like a mobile ack-ack gun and we were reduced to a tin mug! Coasting down a long hill north of Keswick a front tyre burst and the cover went bowling away over the unfenced moor. It was by then quite dark and considerable reconnaissance was necessary in order to find the tyre. But we arrived home under our own power at last.

Then there was the grand old 8th Series Lancia “Lambda” saloon, which saw us through nearly to the finish of the 1938 Monte Carlo Rally. This car did only 200 miles to the gallon of oil and failure to replenish resulted in “ticker-ticker” noises detrimental both to the car and to the nerves of the crew. Our journey in this, to John o’Groats, was very eventful; a short in the magdyno kept blowing the lamp fuses, resulting in sudden and unexpected black-outs and causing anxious moments before we were able to pull up. The fuses mended with silver paper, we would continue our journey hoping, optimistically, to make Newcastle that night. Just south of Catterick we were overtaken by a police patrol as we were searching for yet more silver paper.

“Have you any cigarettes on you, officer?”

“I’m on duty, ma’am! What are you doing without lights?”

“We’re broken down. That’s why we want silver paper and there’s always some in cigarette packets. We’re trying to make New–er, to get to a garage for the night.”

“Well, you’d better follow us into Catterick or you’ll be causing an accident.”

And so it was!

Next morning, as soon as it was light, we continued and, at Neweastie, a garage fixed us up so that the lights stayed on. Then, late that afternoon, the cut-out broke down and the dynamo no longer charged. This was a nice mess, spares for ancient Bosch electricals being all but unobtainable. However, we phoned London and arranged for the necessary parts to be sent to Glasgow so that we could pick them up on the downward run. Meanwhile, we depended on the battery!

We made John o’Groats with only two hours to spare before the start of the Rally. We daren’t use the starter and our efforts to swing the Lancia nearly resulted in broken bones. So we had to push the car around whenever officious marshalls insisted on a new parking place!

When at last we wit off, we discovered that driving on the side lights only wasn’t funny. Our only hope was to cling to the tail of any competitor who was not going too fast for us. Sleeping in the hack proved impossiblethe vibration caused heads to ache and noses to bleed all over the rugs. We survived the first night without losing time, and an hour’s hectic activity at Glasgow resulted in a once1110re-ell:aging dynamo.

The remainder of the drive down to Folkestone was without incident and embarkation AN-IS carried out satisfactorily.

The cobblestones of France -Wok immediate toll of our ” bits and pieces.” The temporary bumpers, fitted to comply with the regulations, fa off and had to be tied on with the t()w rope, the spade came adrift, the fog lamp committed suicide beneath the wheels, and a hack window sank and refused to rise again. This last caused havoc among sheets from a packet of ” Jeyes Interlocking Toilet Paper,” and for several miles thereafter other competitors followed its on the paper-chase system. All went well until we reached Lyons, but in the mountainous going between there and Grenoble we met more trouble. The steering became erratic and wails as Of 1.1 1“st, soul arose whenever a lefthand hairpin was negotiated. Something was very, very wrong, but we were too weary to investigate and our torch Was all but exhausted. So we crawled along —getting more and more behind time but determined to finish if possible. Twice that night we got lost among snowy mountains. The brakes became coated and blocked with frozen slush and could no longer be relied upon. Even the accelerator jammed at intervals and the steering got steadily worse. I had had no sleep since crossing the Channel and now trees, houses and other vehicles began turning themselves into pink elephants, squadrons of cavalry, or many-c,v(1 giants. Coffee at Grenoble restored us a bit and we set out on the last lap of the course. All went well until just before Digne when we were making up time on a straight. bit. Simultaneously we saw the tracks of a car going over the edge into the ravine below and beheld a blood-stained figure arise from the bank like Venus front the waves ! A gasp of horror from us and a scream of protest from the Lancia as George stood on everything and pulled up in record time ! Out we jumped and scrambled down the snowy bank to Where Miss Patton’s car lay upside down, its course marked by bits of windscreen, doors, and other parts. Miraculously, no

a worse. A light, van came along and took one of the ercw off to Digne, while we managed to squeeze in the others. As we made to continue our journey we discovered that the sudden braking had •• start ed something… The nearside front wheel was catching somewhere and there was no lock on that. side. We took it very gently into Digne, where we disposed of our casualties. Then we returned to examine the Lancia. On jacking up the front axle to get a better view we were rewarded by the wheel promptly falling off ! The stub axle had broken into many pieces and a repair was impossible. So we went to ” Monte— in a little mountain train ! One wonders whet her such adventures, pr od fellowship and sensational mishaps will ever come again. Or will the war, with its ” blitzes,” desert can waigns and the rest, make the Sport seem tame and futile in comparison ? No one can tell. but I think a few years hence will find many of the old crowd propping up the

bar and recounting just such tales of ” spots of bother ” as of yore. Perhaps some of us will have lost our old dash and find ourselves less agile than we were. But undoubtedly we will wipe the dust from our laid-up motor-cars and r’-enter for trials with redoubled zest. 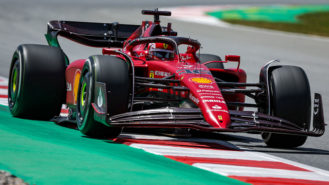