Imagine coming up with the bright idea of building a replica of Mazda’s 1991 Le Mans winner for the 24 Hours — this year. Could you imagine the reaction if you rang Japan asking for the original chassis drawings and a supply of engines? Do you then think you’d be able to persuade one of today’s top sportscar drivers to race the thing?

It may sound absurd, but 20 years ago someone had a similar idea. What’s more, they pulled it off, despite choosing to copy one of the all-time great racing cars. Nearly 10 years after being outlawed from world championship sportscar racing, Porsche’s 917 went back to Le Mans as a Group 6 car. Only the Kremer brothers from Cologne could ever have come up with such a preposterous idea. And only Erwin and Manfred —long-time Porsche racers, builders and restorers — could have turned such an outlandish dream into reality. They got plans for the chassis out of Weissach, had a couple of five-litre flat-12s built and even instigated a small production run of 917 gearboxes. And who did they get to drive it? None other than a former factory driver, Bob Wollek.

The idea to build a replica of the 917K coupe had been hatched in the late 1970s as an adjunct to Kremer Racing’s restoration business. “Over a period of about two years we collected so many 917 parts that we started thinking about building a car,” recalls Erwin. “At that time we weren’t thinking of racing it, except perhaps in historic events.” At the same time, the company had in its workshops a British-owned 917 spyder being converted back to its original closed-top form. That provided a template for the car, but Kremer still required some chassis drawings, which Porsche was only too happy to provide. Veteran Weissach engineer Norbert Singer remembers supplying information on suspension pick-ups and the like. “We didn’t give them the complete plans,” he says, “but we were happy to help because we thought they were building a show car that would have no race history.”

Manfred Janke, Porsche’s sports boss at the time, claims no support would have been forthcoming had the Stuttgart marque had any inkling that the car would end up competing at Le Mans. Drivetrain components would not have been too problematical, however. “Selling engines and gearboxes was part of business,” he says. “They were always available.” Exactly when the Kremers decided to race the car isn’t clear. Erwin insists that it wasn’t until early 1981. He claims the plan to take the car to that year’s Le Mans was fired by the organisers of the race, the Automobile Club de l’Ouest “They came to see me, saw the car and said, ‘Why not bring it to the 24 Hours?’,” he remembers. “Alain Bertaut [the ACO’s long-serving rules boss]  said it would make a great story to have ‘t a modern version of the 917 back at Le Mans. The car was only 60-70 percent finished at this point. I knew I would have to make many changes to the body, the suspension and even the chassis.” 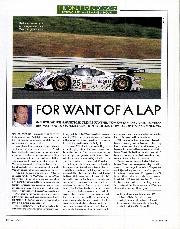 Bob Wollek luckless at Le Mans: For want of a lap

“I’ve won everything in sportscars, except of course, the Le Mans 24 Hours. And of all the near misses, it was the 1998 race that was particularly terrible for me…

Kremer strengthened the aluminium spaceframe, modified the suspension and, most significantly, altered the aerodynamics of this short tail or kurzheck car. The Kremer chassis retained the look of a 917K, albeit more slabsided, but little original bodywork was retained bar the cockpit section. “Apart from the windscreen and doors, everything was custom-made,” explains Achim Stroth, team manager at Kremer for a quarter of a century. “We were trying to bring the concept up to date, but we never went into a wind tunnel.” The short time available for the build process wasn’t the only problem faced by Kremer Racing if it was to make June’s Le Mans, the last time large-capacity Group 6 cars would be eligible. The money also had be found to fund the assault.

The first port of call was the German drinks company that adorned the side of its 935 K3s in the domestic DRM Group 5 series. “I had a picture taken of myself and Bob holding up the chassis with Manfred inside holding a bottle of Jaegermeister,” says Erwin. “Unfortunately they weren’t interested.” Coverage of the project in France attracted the interest of Toulouse property company Malardeau. It provided the lion’s share of the budget along with BP France, but there was a drawback: French amateur drivers Xavier Lapeyre and Guy Chasseuil came with the money.

The Kremer replica — now designated 917K-81 — made it to Le Mans but with less then 50 miles of testing under its belt after the briefest of shakedowns at the Nurburgring. This lack of testing cost the team dear when they arrived in France. “Part of our problem was that the two drivers of, let’s say, medium talent, needed a lot of track time in that kind of machine,” explains Stroth. “I’m sure that if we could have kept Bob in the cockpit we would have sorted it out”

“I asked myself what I was doing driving this shitbox. I really had a bad feeling about that race, so I just walked away.”

Even Wollek was a country mile off the pace in the opening qualifying sessions thanks to the wrong ratios in the car’s four-speed Can-Am-spec gearbox.

“Because time had been so short we didn’t have the right ratios,” says Erwin, “but Porsche came and gave us the right ones. They’d been against us racing the car initially, but now they wanted to help.”

Wollek, a Kremer regular in the DRM, had encouraged the brothers in their unusual project, but his enthusiasm for the 917 replica waned over the course of the meeting. “The car wasn’t bad,” he said shortly before his death in March. “The new body gave more downforce at the front, but that big wing on the back blew the 917’s number one advantage, namely its straight-line speed. It was desperately slow down the Mulsanne.”

The Frenchman qualified on the ninth row, a full 15sec from Jacky Ickx’s pole time in the latest incarnation of Porsche’s 936. Wollek made little progress in the early stages of the race and abruptly threw in the towel at about eight o’clock on the Saturday evening. He was clearly affected by two serious accidents, one of which claimed the life of French Rondeau driver Jean-Pierre Lafosse.

“I asked myself what I was doing driving this shitbox with a couple of slower team-mates. I knew we didn’t have a chance of a decent result,” said Wollek, who complained that the car was nervous on the long straight. “I really had a bad feeling about that race, so I just walked away.” The fortunes of the 917K-81 took a further turn for the worse when Lapeyre collided with a Joest 935 and bent the chassis. Chasseuil managed only a handful of laps before engine failure put the car out of the race before one-third distance.

The reason for that failure isn’t clear. Erwin Kremer insists the problem was caused by a bolt shearing on the exhaust manifold, putting the engine onto 11 cylinders. Stroth recalls the cause as an oil leak and a bizarre ACO rule that only allowed topping up at set intervals. Contemporary reports in the British press suggest crankshaft failure.

The Kremers had initially stated that the 917K-81 would race only at Le Mans, but they wheeled the car out at the last race for which it would be eligible, September’s Brands Hatch 1000Kms. I knew the car had retired from Le Mans for a silly reason, and! was sure I had made a good car,” says Erwin. “I wanted to show that” Wollek was paired up with Henri Pescarolo, who was in a unique position to compare the replica with the original. “Kremer did an interesting job on that car,” says the four-time Le Mans-winner. “They had changed a lot from the old one and it was really nice to drive, and fantastic in the wet”

Wollek ended up third on the grid. Then, for the first half-hour of the race, the Brands crowd was treated to the sight of the past of sportscar racing battling for the lead with its supposed future — a Porsche 917 against Ford’s brand-new C100.

The latter was out of the race by the time Wollek took the lead in the second hour, but the glory lasted only a handful of laps. The Frenchman went off and tapped the barriers at Dingle Dell. The car looked undamaged, but its driver was unable to continue due to a broken steering linkage. Whether this was the cause or the effect of the accident depends on whether you believe Erwin or Wollek’s story.

The 917’s unlikely comeback was over after a fleeting moment of glory. Could there have been more had the Kremers got the car up and running earlier in the year? Wollek probably provided the answer at Brands when he suggested that Manfred Winkelhock’s pole time in the Ford was a couple of seconds off a decent time. But don’t forget Porsche’s Le Mans-winning 936-81, itself an ageing design, was absent that weekend.

Singer believes the replica didn’t have a hope of being competitive: “It looked nice, but it wasn’t very efficient. Everything had moved on. Even our 936 was a lot lighter and stiffer.” After Brands, the 917K-81 was wheeled into the Kremers’ private museum and then sold to another collector years later. The car may not have been successful at Le Mans, but its presence there must have greatly increased its value. Maybe that’s what the Kremers had in mind all along.