W E have often heard people laying down the dogma that one should never buy a second-hand sports car, and although the contention is entirely unreasonable it seems to have affected the outlook of some of the very people to whom such a purchase would be of the greatest benefit. The argument chiefly used by these pessimists is that a sports car is driven much harder than a touring vehicle, and is therefore liable to be worn out in a comparatively short time. These gentry are liable to forget two vital

points. First that sports cars are built for hard driving, and in having a reserve of power are often less abused than the overloaded family hack. Secondly, that the owner of a sports car is generally a fairly discriminating motorist, and as such takes good care of his vehicle.

The greatest argument in the favour of second-hand sports cars is, of course, the question of hard cash. It is an unfortunate feature of this world that the number of people who want, and can afford, the better class sports cars, is disastrously below the number who have equal desires but insufficient means. A new vehicle is, and always will be, the best for service, and also for efficiency of design, but in the case of a man whose pet make costs £800 new, and who has but £300 to spend, there is only one course open, and that is to wait till his favoured model can be obtained for this figure. A good example of the way this can be done was shown to us in the form of a 1928 2-litre Lagonda which Messrs. Gaffikin Wilkinson, who specialise in this make,

loaned us for a week-end recently. The first thing noticeable about this particular model was the fact that it did not appear to be second-hand at all, until a very close inspection was made. This revealed the usual slight traces of wear in details, and it was evident from the pedals that they had been trodden on before ! However, in essentials it looked much younger than its age, and after a few miles driving we realised that it was mechanically no older than it looked, although it had not been prepared

specially in any way, and was just as the previous owner had turned it in to the firm when taking delivery of one of the latest models. The brakes showed slight need of adjustment as they did not come on absolutely evenly, but they were extremely powerful, and the matter of adjustment is a small matter, and readily accessible. The steering had slightly more play than a new car, as was only to be expected, but this would only be noticeable to someone who was definitely looking for it. It was very pleasant to handle however, and the car as a whole was well balanced and steady on corners in spite of being anything but a small car. When the first 2-litre speed model was introduced a few years ago, the point which seemed most remarkable was the way that 2-litre engine performed in a chassis, which in weight and accommodation was more on the lines of a 4i litre car, and our experience with this 3-year-old edition of the same job shows that the performance was not gained at the expense of wearing qualities of the engine. This is a 4-cylinder with

overhead camshafts and is in every way designed and built for a very high efficiency. The firm avoided, however, the mistake of making it rough or intractable, and the compromise arrived at is a very effective one from the point of view of the hard driver who, while wanting something which handles and performs like a thoroughbred, does not want the bother of upkeep which is inevitable with a motor which has been hottedup to the point of being almost a racing engine.

As will be expected from the relative sizes of car and engine, it is necessary to make very full use of the gearbox to get the best out of the car in the way of average speed, but this does not mean that the engine will not pull at low speeds. There is no tendency to harshness or pinking, but merely lack of acceleration unless the gears are used. The gear-box on this model was always a delightful piece of work, and the change was so good that it was really quite hard to change badly on it, and the far reaching effects of this, over a period of many thousands of miles, was particularly noticeable on this 1928 car. Rough engagement will do far more harm to a gear-box than any amount of miming on the indirect ratios, and this ease of changing brought its own reward in the fact that the gears on this car were as quiet as a new one, and seemed likely to remain so indefinitely.

The maximum speeds on second and third were 40 and 60 m.p.h. while the highest speed we reached on the level was 70 m.p.h. The engine bearings appeared to be well nigh perfect, but there was a certain amount of piston slap which was the chief sign of age in the motor. This probably accounted for a slight drop in. the maximum, while the ignition did not appear to be advanced as much as it should have been for full revs. This car should be capable of 75 m.p.h. and we feel it could fairly easily be made to do this with a little attention. to minor adjustments.

Another pleasant feature of this vehicle, which should appeal even more to the impecunious second-hander than to his more affluent brethren, is the fact that it averaged over 24 m.p.g. when driven as hard as possible over a route which was both hilly and tortuous, and therefore not conducive to economy. This figure is definitely good for the type of car, and on a second-hand motor is a good indication of the general mechanical condition of the engine.

The price asked for this particular specimen is in the neighbourhood of 2225 and particulars of this and similar models may be obtained from Gaffikin Wilkinson & Co., Ltd., of 17a, Hanover Square, W.1. 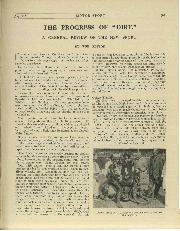 THE PROGRESS OF "DIRT."

THE PROGRESS OF "DIRT." A GENERAL REVIEW OF THE NEW SPORT. BY THE EDITOR. IT is now about two months since the "great Australian invasion" began and we have all… 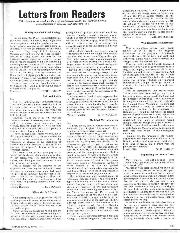 Sir, If I may say so, John B. Perrett's memories of Abingdon ("An Engineer Remembers", May issue) seem to have faded somewhat. The projected S-type of 1935 was not a… 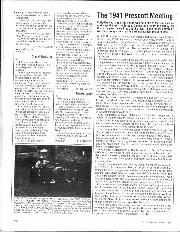 Forty-five years ago this month was held one of the few wartime motor sport events in Europe. Conducted at night in secrecy. tor the participants were breaking the law, it… 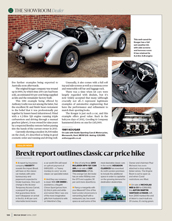 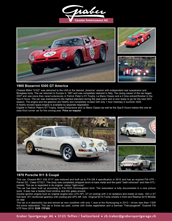 A report by insurance company Hagerty reveals the impact Brexit will have on the classic car market, with extra bureaucracy and paperwork expected to hinder business. One such change is…