Bob Petersen is quietly famous in the old car world for creating superb evocations of pre-War Bentleys at his huddle of workshops in the grounds of an old Devonshire mill.

Starting with a genuine Derby Bentley chassis, Petersen and his team build the cars in the old-fashioned way, using a combination of original parts and beautifully crafted new ones to produce either close replicas of originals or bespoke cars in a vintage style.

Often the cars change hands on the pre-owned market for considerably more than Petersen charges to build them, and among his best known are models such as the replica of Woolf Barnato’s ‘Blue Train Special’ and the ‘Monster’, in which everything was up-scaled in size to create a ‘Bentley-and-a-half’ powered by a 27-litre Meteor aircraft engine.

But arguably the most beautiful of all the Petersen builds is the replica of the legendary ‘Embiricos Bentley’ commissioned in 1937 by the Greek shipping magnate and playboy racing driver André Embiricos, who asked the marque’s board director, Walter Sleator, to fulfil his dream of owning a bespoke coupé specifically designed for dashing across Europe at high speeds.

Sleator recommended Paris-based Embiricos to commission Frenchman Georges Paulin – a trained dentist and a superbly talented designer of aerodynamic cars – to pen a suitably striking body which was subsequently brought to life by local coachbuilder Pourtout.

The result, based on a 1939 MX chassis, must certainly have been described as ‘avant-garde’ by the French but, due to the outbreak of war shortly after its completion, Embiricos failed to fully realise his plan to use the car as the ultimate gentleman’s continent crosser.

In the hands of a new owner post-war, however, it competed at Le Mans on no fewer than three occasions, claiming a creditable sixth place in 1949 – despite still being in road tune. 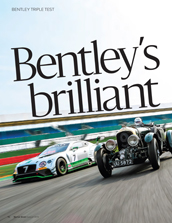 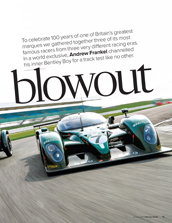 This is quite something: the first time that cars from all three eras of Bentley’s racing history have been driven together. Each has their claim to fame: the GT3 is…

The original Embiricos Bentley now forms part of a Californian collection and is unlikely to be sold any time in the near future – a fact that prompted a Petersen client to ask if it could be recreated.

The answer was, of course, ‘yes’, and the result, which was completed seven years later in 2006, is now on sale in London with classic car specialist Graeme Hunt.

Running its original engine, the car has an exquisite, hand-crafted aluminium body resting on an ash frame, as well as 18-inch wheels with ‘Ace’ discs and an interior trimmed in rich, tan hide and luxurious Wilton carpet. A trio of suitably French Marchal lamps light the way and the gunmetal pewter paintwork gleams like new.

Not long after completion the car was sold to musician Jay Kay, of Jamiroquai fame, who subsequently sold it on to the late Orin Smith, CEO of Starbucks and noted automobile enthusiast.

It was sold on by R.M. Sotheby’s at Amelia Island in 2017, where it went for a relatively modest $671,000. Subsequently checked and thoroughly tested at events ranging from tours of the Scottish Highlands to the Le Mans Classic (where it won a concours trophy) the car is ‘on the button’ and ready to take Europe in its stride.

In the market for a classic cruiser?

£345,000
One of the more overlooked Astons, fully restored and sold new to an owner in Los Angeles, so it’s left-hand drive.
classiccarholland.eu

£75,000
Classic carrosserie that has been extensively restored, and with the Mulliner seal of approval.
pa-wood.co.uk

£228,000
A stunning example that’s found homes across Europe. One of only 62 known to exist.
retrolegends.nl