Described by its drivers as a return to “pure racing”, Toyota’s much-anticipated 2021 Le Mans hypercar has finally broken cover. Christened the GR010 Hybrid, it will race at this year’s Le Mans 24 Hours and in the World Endurance Championship.

In what the ACO is hoping will be the first signal of a new golden era in elite sports car competition, the Japanese marque became the first entrant to fully reveal its new Le Mans hypercar (LMH), ahead of rival teams Glickenhaus, ByKolles and Peugeot – which has only shown concept drawings ahead of its planned entry in 2022.

Development of the GR010 began as soon as the new LMH rules were confirmed 18 months ago. The hybrid racer has four-wheel drive, with a 3.5-litre twin-turbo V6 powering the rear axle with up to 680bhp. A motor-generator unit provides 270bhp to the front axle and recovers energy to charge the lithium-ion battery.

The three-time Le Mans-winning team is aiming to carry on its WEC winning streak started by the TS050 LMP1. Some of the powertrain technology has been carried over but significant change imposed by the new rules include a single motor-generator unit, rather than the pair used by the 2020 car.

The car complies with new cost-cutting measures introduced by the ACO. The GR010 is 162kg heftier than its predecessor, thus bringing it up to the minimum required weight of 1030kg. It’s also 250mm longer, 100mm wider and 100mm higher.

Toyota says the hybrid racer will be 10sec slower at Le Mans than last year’s, which set a pole time of 3min 15.267sec in the hands of Kamui Kobayashi.

With the total power output capped at 680bhp, the Toyota’s electronics will kick in to reduce the engine’s performance whenever the hybrid system is deployed. Being the only major factory-backed hypercar programme, Toyota already looks to be the 2021 WEC and Le Mans favourites. It’s likely to face a tougher challenge from Peugeot’s hypercar next year, followed by another wave of competition in 2023, when Audi and Porsche return with cars built to new LMDh regulations. The ACO is pinning its hopes for close racing on a new Balance of Performance process that allows both classes of cars a fighting chance of victories. 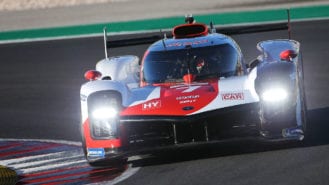 The new generation of top-level sports cars promises a return to “pure racing”, with close competition, no need for fuel saving and more enjoyment for drivers, according to Toyota’s no8…

Developed in conjunction with Toyota’s road-going GR Super Sport, the design similarity with the GR010 is partly down to a new aerodynamic philosophy introduced this year, which limits overall downforce.

Toyota drivers Sébastien Buemi and Brendon Hartley enthused about driving the GR010, which puts more emphasis on those behind the wheel.

“The fact that we don’t have to save fuel per lap like we used to with the TS050 is nice,” said Buemi. “You can stay flat until the end of the straight and brake as late as you want. That gives a feeling of pure racing.”

Hartley agreed: “The fuel-saving aspect is very different from what we had before, so we’re attacking the braking phases more. We’re now going to be diving in under the brakes. It’s going to come down to the driver and getting the race together.”