An F1 team owned by an automotive company is always liable to spring a nasty surprise on that team – as Toyota, Honda and BMW showed a few years ago. The last couple of years have been a worrying time for the Renault-badged Enstone team, which has recently been re-labelled as Alpine.

Carlos Ghosn, boss of the automotive giant Renault-Nissan-Mitsubishi, was arrested in November 2018 in Japan on financial charges. He escaped Japan while awaiting trial in December 2019, secreted in a cargo box in a plane headed for Lebanon.

With Ghosn incapacitated by his arrest, he was replaced at Renault in June 2019 by Jean-Dominique Senard as Renault’s chairman and interim CEO Clotilde Delbos, who would assume that position until a permanent replacement was found. That replacement was announced in January as Luca de Meo, former SEAT president.

“Carlos Ghosn escaped Japan while awaiting trial, secreted in a cargo box on a plane”

Meanwhile, boss of Renault Sport (the competition arm of Renault), Jérôme Stoll, had been set to retire at the end of 2018 and be replaced by Ghosn’s favoured Thierry Koskas. Koskas was a part of the executive committee who had reported to Ghosn but who also previously had a close working relationship with Ghosn’s former number two at Renault, Carlos Tavares. Tavares had left Renault in 2013 after a power struggle with Ghosn. He subsequently took the role of CEO at the rival Peugeot PSA group where he has been ever since.

Koskas, as an appointee of a man who was no longer there, instead took up the offer – in early 2019 – of his old friend Tavares to be Peugeot’s senior VP of sales and marketing before he had even begun his role as boss of Renault Sport. This meant Stoll deferred his retirement from that role until the end of 2020.

Before his retirement, Stoll had overseen a De Meo-planned restructure of Renault Sport as the F1 team was rebranded as Alpine. De Meo wanted Renault team principal Cyril Abiteboul – who had worked closely with both Ghosn and Tavares – to move into the former Stoll role. For the F1 team position, De Meo wanted Davide Brivio, a man he had previously formed a close working relationship with at the Yamaha MotoGP team, which was run by Brivio and sponsored by Fiat, for whom De Meo was the marketing boss. That was over 10 years ago but De Meo had been impressed by Brivio’s ability to get a team to gel, an ability underlined last year when he guided the Suzuki team to its first MotoGP championship. 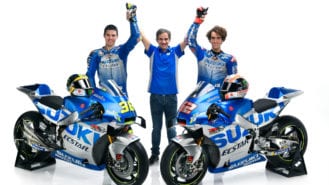 De Meo clearly felt more comfortable making his own appointment for the job of guiding the Alpine team’s F1 programme than retaining the appointee of the previous regime, especially given the unsatisfactory progress of the team in the previous few years. All seemed set for Brivio to be announced as the new team boss, with Abiteboul moving up to that corporate role De Meo had envisaged for him. But at the 11th hour Abiteboul announced he would not be taking up the job – and that he was leaving the company. It is said he wished to still be in charge of the F1 team within the corporate role but that this was not accepted by De Meo. It would be no surprise to see Abiteboul recruited by Tavares and turning up within the expanded Peugeot group – which has competition programmes with Peugeot (Le Mans from 2022), Citroën (a rumoured return to the WRC) and Alfa Romeo (title sponsor of Sauber in F1).

A couple of weeks after Abiteboul dropped his bombshell, the former Stoll role was announced as being filled by Laurent Rossi, a Renault automotive internal appointment. But closer to the coalface of the F1 team, the differing visions of Abiteboul and De Meo also brought a problem: Abiteboul had planned around making the team’s executive director Marcin Budkowski team principal as Abiteboul moved to the senior Alpine role. But now there appeared to be two competing candidates for that team principal job – Budkowski and Brivio, and the latter had already departed Suzuki. A way needed to be found to accommodate both in positions which respected their ambitions and commitments made to them.

Brivio was subsequently announced as racing director – reporting direct to Rossi (i.e. not to Budkowski). But the ambiguousness of the situation created by Abiteboul’s departure was reflected within the statement by the sentence, “[Brivio’s] specific role and responsibilities will be announced in the coming weeks.” If, as expected, Budkowski becomes team principal, there has effectively been another layer of management created.

The challenge for the team will be in preventing the volatile corporate environment from impacting upon its operation and to keep everyone motivated despite the uncertainty at the corporate level. Getting the right group of people in place, then providing a stable working environment has been proven to be the key to F1 success. If Alpine is to flourish, it needs to put this management upheaval to bed as soon as possible – especially with the arrival of Fernando Alonso, who will likely be blunt in his assessment of any shortcomings.

Brivio’s reputation from MotoGP is having great personal skills. That is going to be put to the test now and in a team with about 10 times the number of employees as those of a MotoGP outfit. He’s going to need the support and co-operation of those who are already there if the whole thing is to fly.

Since he began covering grand prix racing in 2000, Mark Hughes has forged a reputation as the finest Formula 1 analyst of his generation