The Roma is not just a new Ferrari, but a new kind of Ferrari. Or, at the very least, one we’ve not seen for a long time. For over 50 years Maranello’s ranges have been divvied up between the big and the small – the full-size cars (almost) always with V12 engines, the smaller with V8s and, once, even a V6. And the last of these ‘compact’ Ferrari coupés also to offer occasional rear seating was the Mondial, a car launched over 40 years ago. Ferrari won’t thank me for calling the Roma a rather late replacement for one of its least-loved models but that, in effect, is what it is.

It’s not entirely new, because it splits its duties and much of its structure with the Portofino convertible, but it’s over 70 per cent different, says Ferrari. And interestingly in a world where closed cars always cost less than their glamorous drop-top siblings, the Roma does not. In price, power and even the number of gears in its transmission, the Roma is positioned clearly ahead of the Portofino.

And doesn’t it look the part? It looks like one of Pininfarina’s finest Ferraris since the 1970s. But it’s not: it’s all the work of Ferrari’s own Centro Stile design centre.

In terms of its specification, it’s all very conventional: no driven front axle, no hybrid drive and there may come a time when we crave such simplicity from these cars. It’s just got Ferrari’s well-known 3.9-litre engine under the nose, programmed to produce 612bhp, driving the rear wheels alone through a new eight-speed double-clutch gearbox first seen on the SF90 hypercar, and notable for its absence from the Portofino. At least for now.

The cabin is by far Ferrari’s best effort to date for this kind of car, marrying elegant shapes and sumptuous upholstery with a level of technological sophistication to make the traditionalists splutter into their espresso. Its instrument pack was also first seen in the SF90 and makes all previous efforts by Ferrari seem antediluvian by comparison. It’s complex in presentation but surprisingly uncomplicated in operation. And while those rear seats are very limited for human habitation, you can say the same of those of a Porsche 911 Turbo S or a Bentley Continental GT.

We meet in conditions which, short of snow, are about as unsuited to driving a new Ferrari as you might never wish to imagine. It is cold, it is wet, the roads of the south east of England are rather more crowded than the hills above Maranello, and time is short.

Even so, I’m not going to turn my nose up at a couple of laps of Goodwood, but discover little more than a car that will spin its wheels in fifth gear, circulate cleanly and slowly if you select a sensible level of electronic assistance, and flick, kick and slip if you do not. I learn far more about the track conditions than I do about the car, so I give it up as a bad job and head out onto the public road instead.

“The Roma is a wide and heavy car, but it’s so accurate, so easy to place, that it never feels so”

It would be interesting to bring someone from the Testarossa or Boxer era to the present day and sit him or her in the passenger seat of the Roma while you put it through its paces. If you kept it in the higher gears, they would doubt your sanity. If you dropped a cog or three and really let rip, they would doubt their own. Where Ferrari is so clever is to provide peak power not at a certain point, but from all the way from 5750-7500rpm. This, combined with closely stacked gear ratios means peak power is available from gear to gear to gear. Which would have been great except for the fact that even had the roads been dry, full throttle activity in this part of the world would have been restricted to a few breathless squirts, punctuated by nervous glances in the mirror. On streaming wet roads it’s not much fun particularly, as with all flat-plane crank, turbocharged V8 motors, its voice is more purposeful than tuneful.

But that is not to say there is no enjoyment to be had here. On the contrary: despite the weather, I would have happily kept on powering the Roma across the Sussex countryside until the tank ran dry. The Roma still manages to offer a rare and special driving experience even when you can’t use some or more of its performance.

It rides beautifully, particularly when you’ve remembered to press the ‘bumpy road’ button and softened off its dampers (or just left the little manettino controller in its ‘comfort’ setting). More than that, it feels compact in a way that it really isn’t. The Roma is a wide and quite heavy car, but it’s so accurate, so easy to place, it never feels so. 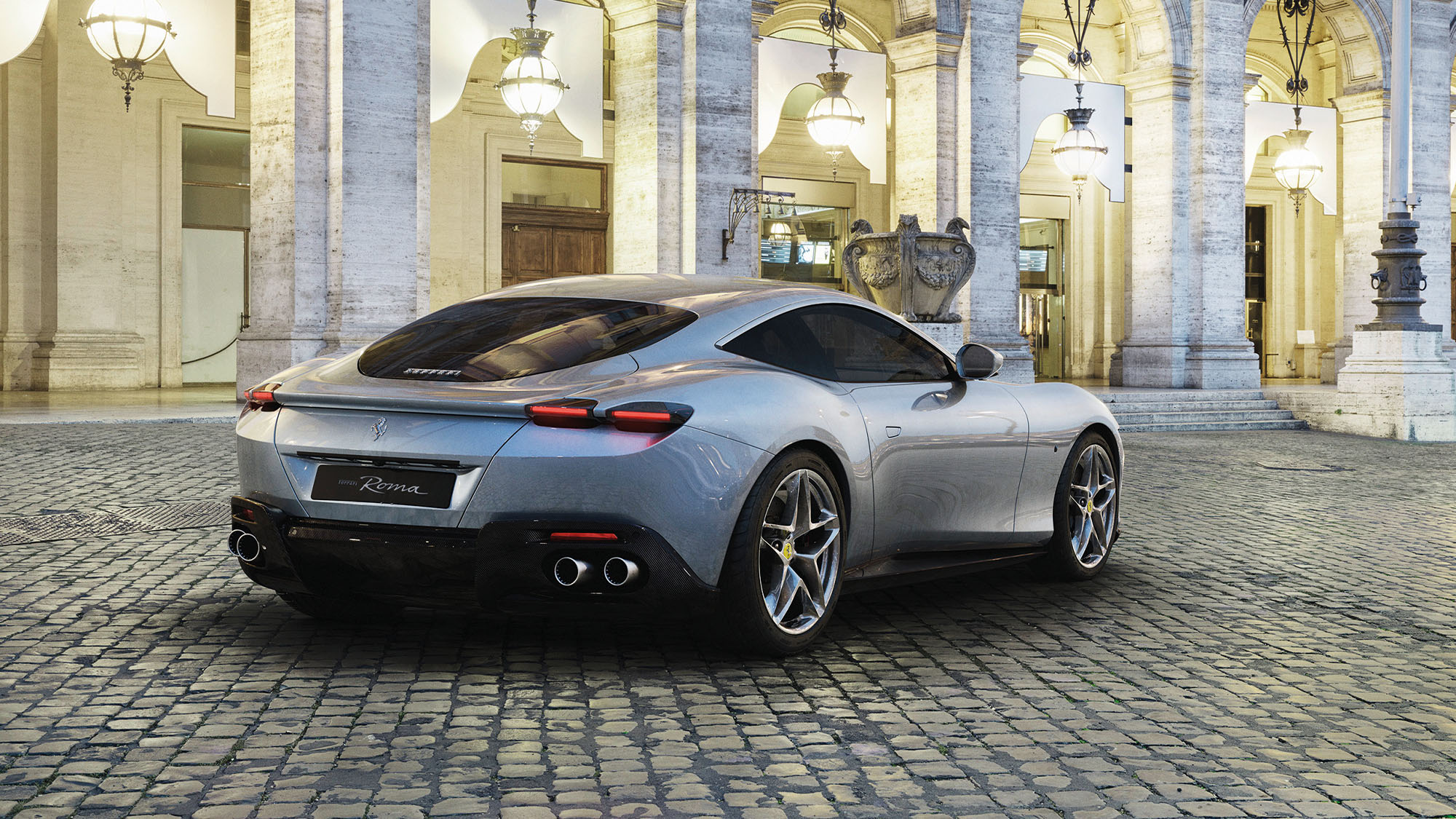 Part of the reason for this lies in the excellent visibility, the rigidity of its structure and the tuning of its suspension, but it’s also down to a quite simple choice to fit a steering rack that doesn’t provide sudden reactions when your hands move away from the straight-ahead position. Ferraris did this in the past because it made them feel superficially sporting, but it also made them more difficult and less fun to drive, particularly in conditions like this. And it bodes well that a car can give a good account of itself in such conditions, and important too as the Roma is the Ferrari most likely to be used every day, at least until its SUV goes on sale in 2023.

It has the look, the name, the power and the driving experience. In short there is very little not to like here.

● Power to weight 390bhp per tonne

● Verdict The weather was rubbish. The car certainly isn’t.