Lucky Graham Robson — he had an RS200 as his daily driver during the years he was involved in the project. In fact he saw all stages of the chunky machine going through development, so he couldn’t be a better guide to how Ford did what it did, so quickly, and the struggles it went through before this promising machine was knocked on the head by the abrupt cancellation of Group B just as it hit its stride.

Robson was close to Stuart Turner when he became Ford’s motor sport director in 1983 and immediately canned the floundering RS1700T project, instead assembling a small team to create a Quattro beater. It seems to have been one of those magic moments when the right people came together; in less than a year from proposals a prototype was ready. Robson vividly describes the excitement that surrounded the task, not that it was easy: arguments raged about the aluminium honeycomb structure, the styling, who should build what, and where to assemble it. But the result was what Turner wanted – a rally winner which looked like a distinct car, not a converted saloon, was decently built and which could also be type-approved and sold for the road. Ghia did a fine job of blending a cut-down Sierra cabin into a cute profile, while the team’s collective motor sport experience meant that the car would be both capable and easy to work on, with its flip-top body panels and easily switched components. It also had to be reasonably comfortable for occupants, and use as many off-the-shelf components as possible – space was even left for a radio-cassette.

After a hearty technical analysis Robson moves on to the complexities of having the thing built: that involved a large number of outside agencies and the sheer frenzy of getting the car ready for homologation is clear. Yet they had 200 cars ready for the FIA inspectors by January ’86, and thereafter the stubby little vehicle began to show that it was a potential champion – until the axe fell.

There’s thorough coverage of the rallies the car did do, plus its later rallycross career, but also the unexpected pressure of refettling the now-redundant cars for the road. Lots of first-hand content, Robson’s own memories adding a personal slant, plus generous pictures and a full chassis listing make this a great overview of a sadly truncated story. 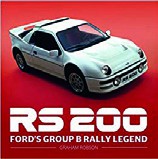 Many readers will have bought the Christmas cards which for 50 years renowned motor sport artist Michael Turner produced annually. Author Parker was one such, but now goes further by collaborating with Turner on collecting all of them into a lavish book, well reproduced on good paper. Each of Michael’s images is accompanied by the story of its subject, and also by Michael’s own memories of the painting, and often of the driver, because Turner was there. Foreword by Sir JYS. GC

Lewis Hamilton, Pierre Gasly and Sergio Pérez were responsible for some of the most eye-catching achievements of the last F1 season – and here’s another. Traditionally Autocourse has been a Christmas treat for grand prix fans, but the delayed 2020 campaign made it impossible to produce by then. Even so, the first copies landed on January 10 – speed on a Mercedes W11 scale. Written by Tony Dodgins, Maurice Hamilton, Motor Sport regular Mark Hughes and more, it is comprehensive, authoritative and well worth the (short) wait. SA

Ferrari 250 GTE — the family car that funded the racing

If not for its glamorous brothers we’d see the 250 GTE as a highpoint of grand tourer style. Instead, 180 of these elegant 2+2s, whose profits kept the racing going, have been chopped about to make another SWB or mock GTO. Long-time enthusiast Wheeler devotes this hefty tome to polishing the car’s profile, from prototypes through production and on to those replicas, backed by vast detail, a ton of photos plus histories. Really one for owners or dedicated fans, though.  GC