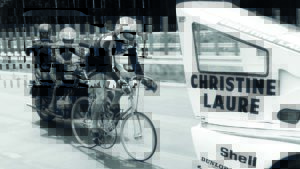 Pro cyclist Jean-Claude Rude, left, prepares to break the 127.2mph cycling speed record behind an adapted Porsche 935 Turbo driven by Henri Pescarolo, right. At 100mph, the bike’s rear tyre broke and became entangled between the frame and wheel. Rude skidded and came to a halt unhurt.
A second attempt was unsuccessful, and Rude would never break the speed record