We all have a copy of Full Throttle, don’t we? A core book of any motoring library, written by a dashing hero of the track. Have we all read it fully? I realise now that having bought it looking for romance and excitement, I skipped what Birkin calls the kernel of his book – lambasting the 1930s establishment about the poor facilities and support for motor racing. Sued by Brooklands, the very place we picture him, for slamming the ageing track as inadequate and dangerous he had to insert a mild retraction – without removing the contentious words.

Did we need a new edition of racing’s most famous title? Out of print for years, second-hand copies nevertheless abound; but within its arresting cover painting this includes a fresh, if small, selection of photographs and a couple of additions. Derek Bell reflects on his famous Le Mans precursor, while a thoughtful introduction from Brooklands Museum’s former director and CEO Allan Winn adds personal details and resets the book’s context: when Birkin was writing Britain, despite those Le Mans successes, was an also-ran in grand prix racing, held back by limited public interest and the ban on road racing, leaving that crumbling concrete speedbowl as the mainland’s only racetrack. Two things today might cheer Birkin: Britain is the home of F1, and we recently changed the law so that roads can be closed. Too late for Tim’s idea of road racing, but then we’re long past the age of using hedges and trees as track borders.

Birkin, of course, didn’t write the book; a young student named Michael Burn distilled it from Tim’s outpourings. Re-reading it, it shows humour, flair and spark driven by Tim’s passions. It’s as much about the sport as about himself, a man anything but vain: he says if his readers picture him as tall and broad he is heartily sorry – “I am quite small, and I do stammer.” When I interviewed Burn in 2004 he said that flamboyant was the wrong word for Tim – he was just innately attractive.

Birkin made little profit from Full Throttle – one of those wealthy people who never has money, he sold the royalties to scrabble a few pounds for his racing. Within a year he was dead, leaving an unforgettable image and a book which he fears is “superfluous, rude, dull and pompous”. Not to me. 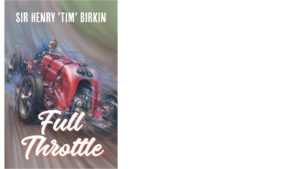 Making a change from yet another history of Ford’s famous racer, this is a true anthology in that it assembles an assortment of memories, details, photos and PR material to round out this often-told tale. Thus there are photos of the first car being completed and rolled out, stories about testing, an explanation of Appendix J and a diverting foray into the man claiming to be the not-dead-after-all Ken Miles. Too many similar photos, but plenty to interest Ford fans.
GC

While covering all the racing Testa Rossas, this one majors on the 250 TRs which brought Ferrari sports car titles, especially the 1960 Le Mans winner driven by Gendebien and Frère. This is handsome to look at, while Bluemel’s writing offers the whole tale from four cylinders to 24-hour glory, plus sidebars on drivers and owners. Colin Crabbe says his wife drove his to the supermarket.
GC

A Life by the Poole
Alec Poole

Without a doubt the most jumbled book I’ve ever reviewed, but Alec Poole’s long career in racing has loaded him with a million stories and he fires them all at you in this self-published non-stop riot of pranks, ruses and salacious tales. Hard to believe he actually managed to win anything, let alone become a saloon champion (he’s still flinging Minis around at Goodwood) and Nissan team manager. Hear about driving Monza banking no-handed, water-skiing past Parliament, shackling Paddy Hopkirk at his wedding and selling ‘MG’ bricks to Americans…
GC