Much has been made of the battle to improve Formula 1’s watchability, and the proposals to improve it made by F1’s owner and promoter, Liberty Media, and motor sport’s governing body, the FIA.

Whether they manage to improve the show or not remains to be seen. First, however, they have to address the pandemic problem that remains an enormously bulky elephant in the room in sporting terms, as motor sport tries to salvage a 2020 season.

Coronavirus threatens to upset the global applecart in so many ways that even a zillion-dollar global sport could effectively vanish overnight into a Governments-enforced suspension. Such an event will mean only the most supremely fit and securely long-term funded of race entrants survive.

Through top-class international motor sport’s long history, lengthy suspensions of activity have only intruded through the two ghastly periods of World War. It was only a month after Mercedes finished 1-2-3 to a glumly silent crowd in France’s Grand Prix de l’ACF on July 4, 1914, that German forces invaded Belgium. Kaiser Wilhelm II declared war on France and, in a treaty-bound response, the British Government counter-declared war with Germany.

The confined motor sport community of the time either shut up shop to confront the reality of an exploding world order or – where the major European manufacturers were concerned – supported continued racing activity in nations then uninvolved in the conflict.

America finally waded into World War I in April 1917 and decisively tipped the balance against Imperial Germany. After that war was halted by the Armistice on November 11, 1918, premier-league motor sport staged a spritely return as early as May 31, 1919. Wilcox won the Indy 500, yet again for Peugeot. Europe lay devastated, but Count Florio still revived his Targa Florio in untouched Sicily on November 23 that year. André Boillot would secure yet another top-line Peugeot success.

Motor racing proliferated worldwide through the between-war years until the politicians and their supporters lost the plot once again by getting us into World War II, interrupting the only activity that ever really matters. While Germany, Great Britain and France returned to ripping bits off one another, those sensible Italians continued racing in Sicily and Tripolitania (now Libya) into 1940. Luigi ‘Gigi’ Villoresi would win for Maserati in Palermo and Giuseppe ‘Nino’ Farina took victory for Alfa Romeo in Tripoli.

Isolationist America, meanwhile, continued racing into 1941. Wilbur Shaw had won the Indy 500 for the second consecutive year in the Boyle Maserati 8CTF in 1940 but he then lost a wheel in the 1941 race to leave the Wetteroth-chassised Offy co-driven by Floyd Davis/Mauri Rose to win. Seven months later came Pearl Harbor, the US entered the war, and racing stopped…

Over the long years since peace returned in 1945, whenever recession, depression or disease threatened, blindly optimistic racers have just charged on regardless. But today such nonchalance will surely be condemned and/or punished by the government and ‘woke’ society alike. The 1955 Le Mans disaster led to multiple race cancellations, while the game and governing body alike found sticking-plaster ‘fixes’ to assume a fig leaf of improved racing safety.

The Suez Crisis caused British racing to be restricted by five months of petrol rationing in 1957 and that year’s RAC Rally was cancelled. Ten years later, the 1967 event went the same way at just 24 hours notice due to foot and mouth disease – in cattle, not the crews. Just the first four-mile stage was run in compensation, near Camberley.

Today, a repetition of global war seems unlikely, thank goodness. But a disruption to motor racing by a viral pandemic could have the same effect: a suspension of unpredictable duration.

As our late friend ‘Jenks’ wrote on his kitchen wall – “Aah nostalgia – the real thing”. There’s certainly a huge temptation for us, the unengaged enthusiasts, to take solace by looking backwards in time to where there’s still so much to savour. And of course that past – from this range – is a safer place. 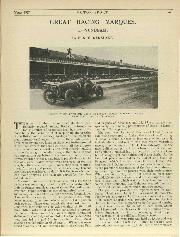 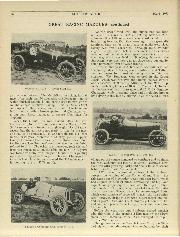 GREAT RACING MARQUES. I.—SUNBEAM. By E. K. H. KERSLAKE. THE name of Sunbeam is one which should be particularly revered among English motorists, as for a .number of years this… 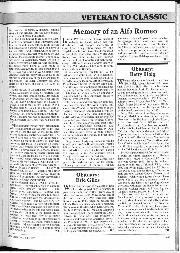 We learn with regret of the death of Eric Giles, who played such a prominent part in the early days of the Bugatti OC, of which his brother, Col GM… 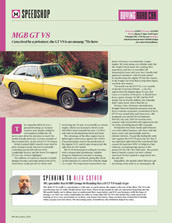 Conceived by a privateer, the MGB GT V8 is an unsung ’70s hero The venerable MGB GT was a ground-breaking car in many respects and, despite selling in vast numbers… 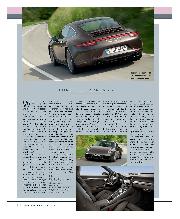