What makes a racing great? And who qualifies as one? These are questions we have all asked ourselves at some point – and probably been the basis of a heated debate with a fellow enthusiast. And since 2010, Motor Sport has been asking you, our readers, to help us decide the answers.

Our annual Hall of Fame awards seek to create the definitive list of all-time greats and celebrate their achievements. The list features names from across all the disciplines and eras. It includes Ayrton Senna and Jim Clark, Stirling Moss and Jackie Stewart. Valentino Rossi and John McGuinness, Derek Bell and Tom Kristensen. It also celebrates those people who have given to the sport in ways other than simply winning races. Sid Watkins is there and so too are Adrian Newey and Colin Chapman.

Of course, other such lists exist elsewhere. And all have their merits. But what sets our Hall of Fame aside is the way the names are chosen – by popular vote from a group of names decided on by the Motor Sport editorial team.

We like to think that because our readers are among the most knowledgeable motor racing enthusiasts in the world, and because they exhibit such sound judgement (as evidenced by their choice of publication!) the resulting list provides the most definitive answer to who really is a motor sport great.

Every year we are staggered by the number of readers who cast their vote via our website. This time we have introduced a few changes. For a start we have narrowed the shortlist in each category down to three to make the choice simpler. More controversially we have loosened the criteria for making it to the shortlist to include those competitors who may not have retired from the racing arena (a strict condition of previous nominations).

This means, for example, that this year we include Scott Dixon in the US Racing category. Yes, he is still competing at the top level aged 41 – this year being his 18th Indy season – but with six titles to his name and 51 career wins (only AJ Foyt and Mario Andretti have won more) he more than qualifies and shouldn’t be left out on a technicality. We have also, where possible, tried to compare like with like and offer readers a choice of drivers who competed against one another or who have similar records. So, in the F1 category, all three nominees faced each other in period and all three have one World Drivers’ Championship title to their name.

As in previous years, casting your vote couldn’t be easier: scroll down for the voting form. We will announce the winners before Christmas when we will welcome five more names to the Motor Sport Hall of Fame. Happy voting! 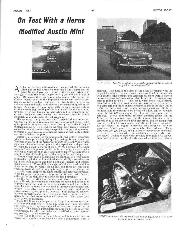 On test with a Nerus modified Austin Mini

As far as sporting enthusiasts are concerned the ordinary Mini has far less attraction than the Mini-Cooper and its latest S-type derivation. However, the standard Mini costs only £448 while…

Stunning to behold, but less so to drive You could right now be running away with the idea that the Aston Martin Vanquish Volante must be the greatest Aston of… 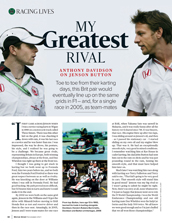 “I first came across Jenson when I was a novice racing karts in Wigan in 1988 on a motorcycle track called Three Sisters. There was this other kid on the… 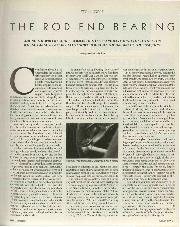 Among the wreckage of a German fighter plane was found the future for racing car suspensions. Keith Howard reveals the origins of the rose joint. Compliance. If you had to…