The Hamilton, Verstappen accident at Silverstone to me illustrated what a corner F1 has driven itself into with its stewarding standards. This was obviously an incident the stewards needed to study. There are a number of different opinions. If it was a racing incident, I still think Lewis was the main culprit and should have received a drive-through penalty. However, the real issue is the two penalty points that were added to his licence. Lando Norris received two licence penalty points just for defending his position in Austria and this is where the problem lies. The stewards are involving themselves in far too many incidents. Stewards awarding penalty seconds like confetti is doing real harm to F1 – they could almost be said to be bringing the sport into disrepute – and the FIA needs urgently to sort it out. When I became interested in the sport in the mid-1950s, it was called motor racing. I believe it still is, and the participants are called racing drivers. Please, let them race.

As a senior member of the McLaren design team in the 1980s and ’90s, and as the project leader for the forward monocoque, nosebox and front suspension for the MP4/4, I read with interest Gordon Murray’s recollections in September [The Motor Sport Interview] of how ‘he designed’ the car.

I can only imagine Gordon and the rest of us in the design team were living in parallel universes, as his version of the events of late 1987 and early ’88 is not the same as mine, nor indeed any of my former McLaren colleagues I have spoken to on the subject.

Gordon himself appointed Steve Nichols with responsibility for the design and development of all turbocharged cars in 1987 and ’88, and notified all McLaren management and senior staff of the fact in an August ’87 memo. Gordon concentrated on workload planning, operational procedures and production schedules and was responsible for bringing in Pete Weismann to assist with the gearbox internals. Under Steve, many of us had specific design responsibilities, but the overall car concept and layout was very much his creation, as can be seen if you compare the lineage with the MP4/3, his previous design. We certainly did not see or refer to any BT55 drawings or even have that car in our minds when designing the 4/4. As well as it being highly unethical to be in possession of, let alone use, such drawings, neither we nor Ron would have wanted to develop a BT55 copy knowing its well-understood problematic history. Why would we?

Gordon is a great designer and has produced some wonderful cars in his time but not giving due credit to Steve for the 4/4 is unfair to him and to many people throughout the team who worked incredibly hard and achieved so much that year.

In reality, no one person designs every piece of an F1 car but Steve was responsible for the concept, design and development of the 4/4, just as Neil Oatley had the same responsibility for the MP4/5 in 1989. There is no doubt that had the car been a failure it would have been Steve’s neck on the block.

I was saddened to see the death of Carlos Reutemann announced recently [as reported in Matters of Moment, September]. In the 1970s I used to make the communications equipment for most of the F1 teams.

Intercom systems were used to talk to the drivers in the pits, to overcome the noise levels, and although we had the occasional radio and used them on Le Mans cars, F1 didn’t bother as units were generally too big.

In the late ’70s we decided to try a new lightweight radio at a Lotus test session at Silverstone. The driver of the day was Carlos and we made a bit of progress but Colin Chapman had decreed that I had to make the radio voice-operated from the car. After having a go with clever microphones and the best electronics I could muster we realised it would work sometimes, but when it caught the car in front the exhaust noise simply turned it on full time.

After realising the radio wasn’t up to much I explained to Colin that we needed to use a transmit switch on the steering wheel. Colin’s reply was no, the driver has too much to do to push a button. I argued that Spitfire pilots managed, but Colin’s reply was, “They were up in the air with nothing to hit.”

Christian Horner has sullied his reputation beyond recovery by his response to the Silverstone incident. There isn’t a racer past or present – Rindt, Mansell, Senna, Schumacher, Vettel, Lewis and Max himself, to mention but a few, who wouldn’t have gone for it. Senna, Schumacher, Vettel and Max acquired the reputation of aggressive tactics. Lewis didn’t give way this time as he has on previous occasions. How can it be anything other than a racing accident?

Tony Stewart arguably deserves inclusion among the honourable mentions of the all-rounders feature in July [Masters of the many]. The American racer has won championships in NASCAR and IndyCar, achieved a podium finish and several strong drives in the Daytona 24 Hours, and continues to engage in dirt track racing as a competitor. His lack of activity outside the United States shouldn’t preclude his consideration in this discussion.

Look at IndyCar drivers: they have had to master many disciplines, often in the same championship. If you take a window of the past 50 years you have drivers like Foyt, Parnelli Jones, Mario Andretti, Rutherford, Bobby and Al Unser, who were at the top of the tree in sprint cars, on dirt and asphalt, some in NASCAR, TransAm, Can-Am, and also in IndyCar, on big and short ovals, often tackled in the same season. Then you have Dan Gurney who excelled, and won, in IndyCar, Formula 1, Le Mans and NASCAR, each radically different. Today’s permanent road tracks, street courses, short ovals, medium ovals, and superspeedways each have different requirement of car and driver.

Then one should analyse what IndyCar drivers of today face. Running at 150mph on a one-mile oval, braking for some corners, is a long way from running 240mph on a 2½-mile oval; the commitment level change is monstrous, as is the understanding of and responding to the track changes during a race. Couple that with the skills required to run on bumpy street courses and permanent road race tracks in what is basically the same car and now look at your list, and consider doing all of this in the same season.

A bit different from some of the drivers in your selection.

Andrew Frankel’s wonderful Lister Costin article [Smooth operator, September] contained an inaccuracy regarding the tragic fatal accident that befell poor Ivor Bueb. Ivor was not hillclimbing his Cooper in July 1959. He was racing BRP’s Cooper-Borgward T51 in the Auvergne Trophy F2 race, at Circuit de Charade. He was thrown out of his Cooper at the Gravenoire multiple apex section of the circuit and died six days later in Clermont-Ferrand Hospital. He is buried in Manor Park Cemetery, London.

I can only reiterate the sentiments in September’s editorial [The Editor] regarding historic motor racing buildings. The Ford Advanced Vehicles as well as the Lola buildings next door in Yeovil Road, Slough have both been demolished. When I was an engineering apprentice I used to see GT40s and GT350 Mustangs exit those buildings and Lola single-seaters being towed down the road. I drew Graham Hill’s Indianapolis-winning Lola T90 one lunchtime when it sat outside.

The buildings in Oxford Road, Slough where the Gulf Porsche 917s were maintained are no longer standing, and the bowling alley under which Roy Winkelmann’s Brabham Cosworths were housed has been flattened to make way for apartments. The wooden sheds at the back of a pub on the Bath Road where Frank Williams started up are gone too. This is a world with little sentiment.

Re the review of Richard Williams’ Stirling Moss book [Extra miles from a well-told story, August], as a 10-yearold living in South Africa in 1959 I was excited to learn Moss would be competing in the South African GP. But there was never any talk of his antipathy towards racial discrimination, common at that time in the Commonwealth.

Moss returned to South Africa to win in a Porsche and then placed third in a Lotus 18, while in 1962 he was the guest of honour when East London hosted its first world championship GP. In all those visits to my knowledge Moss didn’t raise the issue of racial discrimination. I wish he had; more power to Lewis Hamilton on his stance on the issue. 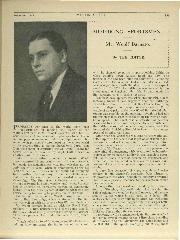 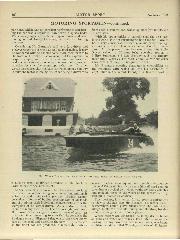 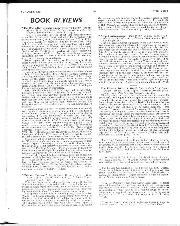 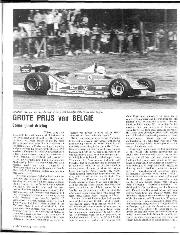 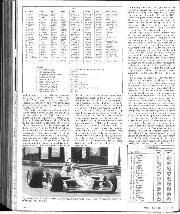 Some good driving Zolder, May 13th The little Zolder circuit, which is situated in the sandy scrublands of north east Belgium, not far from the Dutch border, is not the… 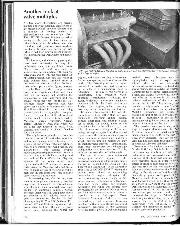 Another look at valve multiples

A few more observations are perhaps justified under this heading, used for one of last month's articles, in view of the return by a number of leading makers of high-performance…