Sixty years ago this summer – at Kristianstad in Sweden – Honda won its very first World Championship. The rider was Mike Hailwood, who wasn’t even an official Honda rider at the time. His millionaire dad Stan ‘The Wallet’ Hailwood had rented a Honda four-cylinder RC144 for the 11-round 250cc grand prix series. Hailwood’s remarkable natural talent did the rest.

Company founder Soichiro Honda rarely made visits to Europe because he was too busy working in Japan, but he was at Kristianstad that day to see history made, after flying from Tokyo to Stockholm via Hong Kong, Mumbai, Karachi, Cairo and Rome.

Honda-san’s desire for world domination had his riders and engineers take control of grand prix racing with stunning speed in the early 1960s. This followed his 1954 declaration that his nascent motorcycle business would tackle the Isle of Man TT, the world’s most challenging and prestigious motorcycle races. However, a fact-finding visit to the following summer’s TT didn’t go well. “There is no way we can win,” he said after watching MV Agusta and Gilera dominate the 125cc, 250cc and 500cc races. “What a big mistake I’ve made.”

After leaving the Isle of Man, Honda-san went on a shopping spree in Europe, buying a Mondial 125cc race bike in Italy and all kinds of other kit, from shock absorbers to machine tools, to be analysed in Japan.

In May 1959 Mr Honda waved goodbye to his first TT squad at Tokyo airport. They returned with the 125cc team prize and only two years later Honda won both rider and constructor crowns in the 250cc and 125cc World Championships. By the end of 1967, when Honda withdrew from motorcycle grand prix to focus on Formula 1, the company had won 33 World Championships and 138 GPs.

Only one of Honda’s world champions from that golden age is still with us today, 89-year-old Jim Redman, who rode Honda machinery to six World Championships and 45 grands prix covering the 125cc, 250cc, 350cc and 500cc classes.

In March 1961 Redman became the first gaijin to sign for a Japanese manufacturer when he inked his first Honda racing contract. Redman worked closely with Honda-san on motorcycle development and has many memories of the man who would change bike racing forever.

“Mr Honda was always in the R&D factory, you never found him in the offices,” recalls Redman. “He let others do all the office work because he was happiest when he was up to his elbows in grease.

“There was a funny one a few days before the Japanese Grand Prix at Suzuka, where Honda had a big factory. My team-mate Ralph Bryans was having problems with his 50cc twin but we weren’t allowed to use the circuit to fix them, so they told us to use the airstrip next to the factory.

“While we were there working on the bike we had to clear the runway because Mr Honda was arriving in his plane. After he landed he came across to ask what was going on.

The mechanics told him and the next thing he was into the bike, kneeling in his suit, working away. He was really hands-on.

“I think the reason Honda came up with so many good engineers was that they worked right next to Soichiro in R&D; he wasn’t tucked away in a big office suite having coffee. 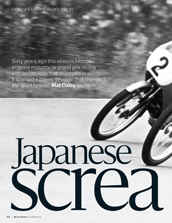 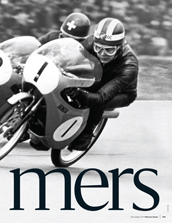 Honda-san made his final visit to a motorcycle grand prix a quarter of a century later, some years after his engineers had forsaken his beloved four-strokes to go with the two-stroke flow. In May 1985 he arrived at Jarama to watch Freddie Spencer during his march to a unique 500cc/250cc world title double, riding NSR500 and NSR250 two-strokes, which used reed-valve induction.

“Mr Honda came to Jarama and we were told he would be visiting the garage,” remembers renowned mechanic Stuart Shenton, who looked after Spencer’s 250s. “We were told what to do and where to be, then we stood there waiting.

“Mr Honda arrived and laid into Takeo Fukui [later president and CEO of Honda]. I asked one of the Japanese what he was saying. He told Fukui, ‘Are you stupid? Did you pay attention at school? Because you don’t know what you’re talking about!’ He said, ‘Right, you’ve built these bikes with reed valves, now bring me a reed valve.’ Then he lectured the engineers about how he thought the reed valve should be.”

A year or two later Shenton was at HRC (Honda Racing Corporation) in Japan to build the latest bikes for the new season.

“Mr Honda turned up holding a motocross cylinder. He’d come to find the designer. He said, ‘Who designed this?!’ A bloke stuck up his hand and the cylinder was hurled at him across the room; then Mr Honda turned and walked out.”

Although his workers nicknamed him The Old Man, he wasn’t always avuncular.

Mr Honda died in August 1991 in Tokyo at the age of 84. His funeral was a modest affair, according to his written request: “Don’t have a funeral procession that will interfere with the traffic.”