Red Bull first tried a diffuser with shark teeth serrations along a gurney flap during Monaco practice. In that version, the serrations were at the outboard ends of the top of the diffuser only. This was raced in Baku and France. A more fully developed version with the teeth along the full width of the top of the diffuser appeared on Verstappen’s car from the Styrian Grand Prix and on Pérez’s from the Austrian GP a week later.

The whole aero philosophy of the Red Bull is that of maximising the static rake angle of the car (i.e. tail up/nose down). With a greater angle of attack, the underfloor generates more negative pressure, sucking the car harder into the track. At higher speeds (the downforce squares with speed) the tail of the car is forced down and along the straights it can thereby shed much of the extra drag associated with extra downforce. But there are practical limits to how far you can go with rake angle, one of which is mechanical (the angle of the driveshafts), the other aerodynamic (the tendency for the airflow through the diffuser to stall at low speeds/big ride heights). As the car slows the downforce bleeds off, the ride height increases and the airflow is at its slowest. So keeping that flow from just dissipating out the big gap beneath the diffuser becomes ever more difficult, and at some point it stalls and there will be a sudden reduction in rear grip.

Red Bull has managed to design its driveshafts to run at the extreme angles needed for a rear ride height of up to 150mm. But the aerodynamic problem was still imposing the rake limit before the mechanical one. What these diffuser serrations do – in combination with the gurney flaps which lift the outer airflow up, moving the point at which it merges with the airflow through the diffuser further back – is create multiple vortices of spinning air around the inner roof of the diffuser. This keeps the airflow coming through there energised at lower car speeds. In so doing it makes it feasible to run a higher rake angle. This increases the downforce created by the underbody, especially at low speeds. 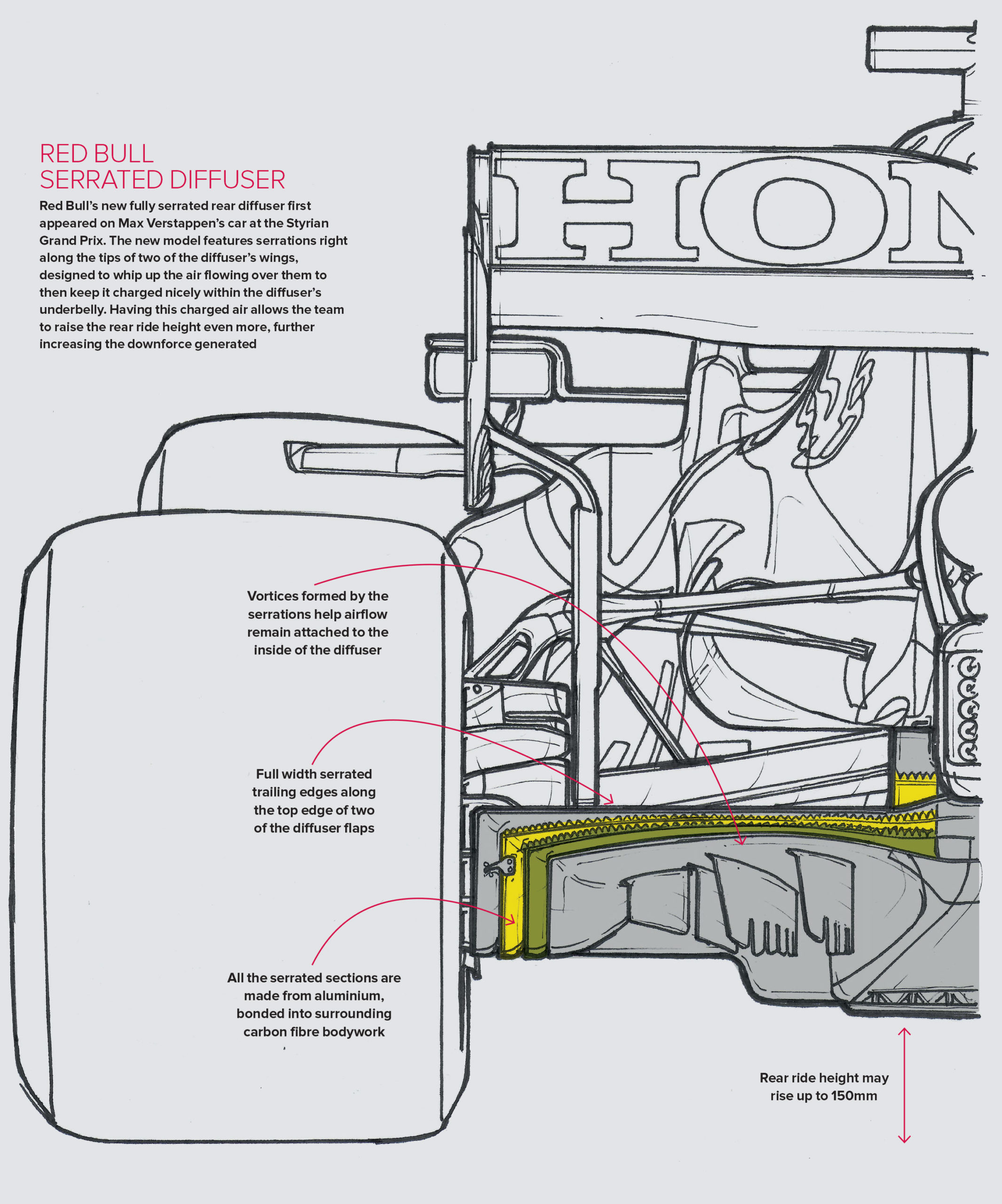 Once this breakthrough had been achieved, the car could be re-optimised aerodynamically. With more rear grip now being generated by the underbody, the optimum rear wing area/angle was reduced. It was notable at both Paul Ricard and the Red Bull Ring that the Mercedes was carrying significantly more rear wing than the Red Bull – and this was generally reflected in a straight-line speed advantage for the Red Bull. But that’s just the beginning of the process. With more rear grip available, the whole car can be upgraded – and at the second Austrian race Verstappen’s car was fitted with a new higherdownforce front wing. It could then be balanced with a greater rear wing angle. This had the effect of reducing the car’s straight-line speed advantage at the Austrian Grand Prix, but for an even greater lap time advantage as the car was carrying even more total downforce. This can be seen from the comparison of the straight-line speeds of Verstappen running the new wing and Pérez with the old one.

The optimum wing level for Hamilton’s Mercedes was clearly greater than that of either Red Bull.

At the optimum wing level any reduction in size will lose more time through the corners than gained on the straights. But where that optimum level is depends upon the efficiency of the car’s aerodynamics and the power of its engine.

The high-rake Red Bull, which under the 2021 regulations derives more of its total downforce from the underbody than the Mercedes can (see last month’s F1 Tech) runs more efficiently. The front and rear wing combined account for around 33% of an F1 car’s total drag. The underbody accounts only for around 15%. So the more downforce that can be generated by the underbody, the more capacity it creates to reduce wing levels. Thereby the optimum wing level reduces accordingly.

F1 car development is always about optimisation loops and it is clear that this year’s Red Bull is still very responsive to them under the changed regulations.