If the Audi e-tron GT raises one question more than any other, it is simply this: why not buy a Porsche Taycan instead? Under the skin these electric four-door coupés are as close as makes very little difference indeed, but the Porsche provides a far wider model range – with versions both more powerful and more affordable than anything Audi has to offer – as well as two body styles with the recent introduction of the Taycan GranTurismo. And, well, it’s a Porsche and comes ready made with an as-yet unchallenged reputation to be the best electric car yet offered for sale.

If there is an answer, it lies in the detail. In engineering terms, there are only two kinds of e-tron GT, the base car which retails for £79,000, and the RS version which costs £111,950 before you start adding packages to it. The car I tested was in Carbon Vorsprung guise, which will set you back £133,340 before any extras.

With the standard car the important point to remember is that unlike the base Taycan, it comes with four-wheel drive, the long-range battery and two electric motors as standard. It has 120 additional horsepower too, which is not bad given the quite modest £9000 premium charged over the Porsche. Its real rival is the similarly powerful Taycan 4S, but Porsche not only charges almost £4000 more for that, you’ll still have to pay extra for the big battery. The RS version is equivalent to the Taycan Turbo and offers a little less power for a little less money.

The other reason is the look. I happen to really like the styling of the Taycan –I probably prefer it to the Audi – but judging from the reactions of others, mine appears to be a minority view. I think the Porsche has the more audacious, less predictable look, but there’s no denying the Audi’s svelteness of line nor the way it combines presence with finely judged detailing into a shape unlike that of any other Audi, yet which couldn’t be anything other than an Audi.

I’m less convinced by Audi’s approach with the interior. Do not mistake me: it’s very fluently executed into a cohesive whole and utilises materials which fully justify its six-figure purchase price. All it’s lacking is a certain sense of occasion, of celebration even, that this is Audi’s first all-electric sporting car. In fact in the way its screens default to age-old Audi fonts and present all their information in a very straightforward and predictable manner, it is a little too much like many other Audis in general, and the e-tron SUV in particular.

I’m not suggesting it would be a good idea for Audi to compromise the effectiveness of the man/machine interface and I supported the decision to play it straight with the SUV, but in a car that looks like this and costs so much, I felt a little more ambition and star quality would not go amiss.

You could say the same about the way it drives but I’ve thought the same about every EV and am learning to accept that their dull powertrains and immense mass just go with the territory. The e-tron RS feels pulverisingly fast at maximum attack, but there’s no joy to it, any more than there is in a Taycan. The powertrain is a device for doing a job, and as interesting in the way it does as any other electrical appliance – so not that interesting.

The chassis interests me more. Although I would urge everyone buying either the Porsche or Audi to specify four-wheel steering, I’d say Audi’s engineers have done an excellent job in tuning the e-tron to behave like an Audi, at least on the air springs fitted to the test car. Ride quality is exceptional and it handles with the same security and grip as other fast Audis, but without the associated understeer. Instead it stays quite neutral to a high limit and is nothing if not accurate and composed as a result. In all, it’s not is much fun: there’s no feel through the steering, no sense whatever of the car trying to involve you in what it’s up to. While it’s perfectly prepared to put on a show if asked, it leaves you in no doubt that your side of the bargain is to sit still and watch.

You may be surprised, then, to learn that I liked the e-tron RS rather more than I expected. I feared it might just be a slightly more rubbish Taycan, but it’s really nothing of the sort. I still prefer the Porsche because it has been rather bolder in most areas of its design and execution, but the e-tron has an identity of its own. You never sit there thinking you’re in a disguised but otherwise badge-engineered Taycan. 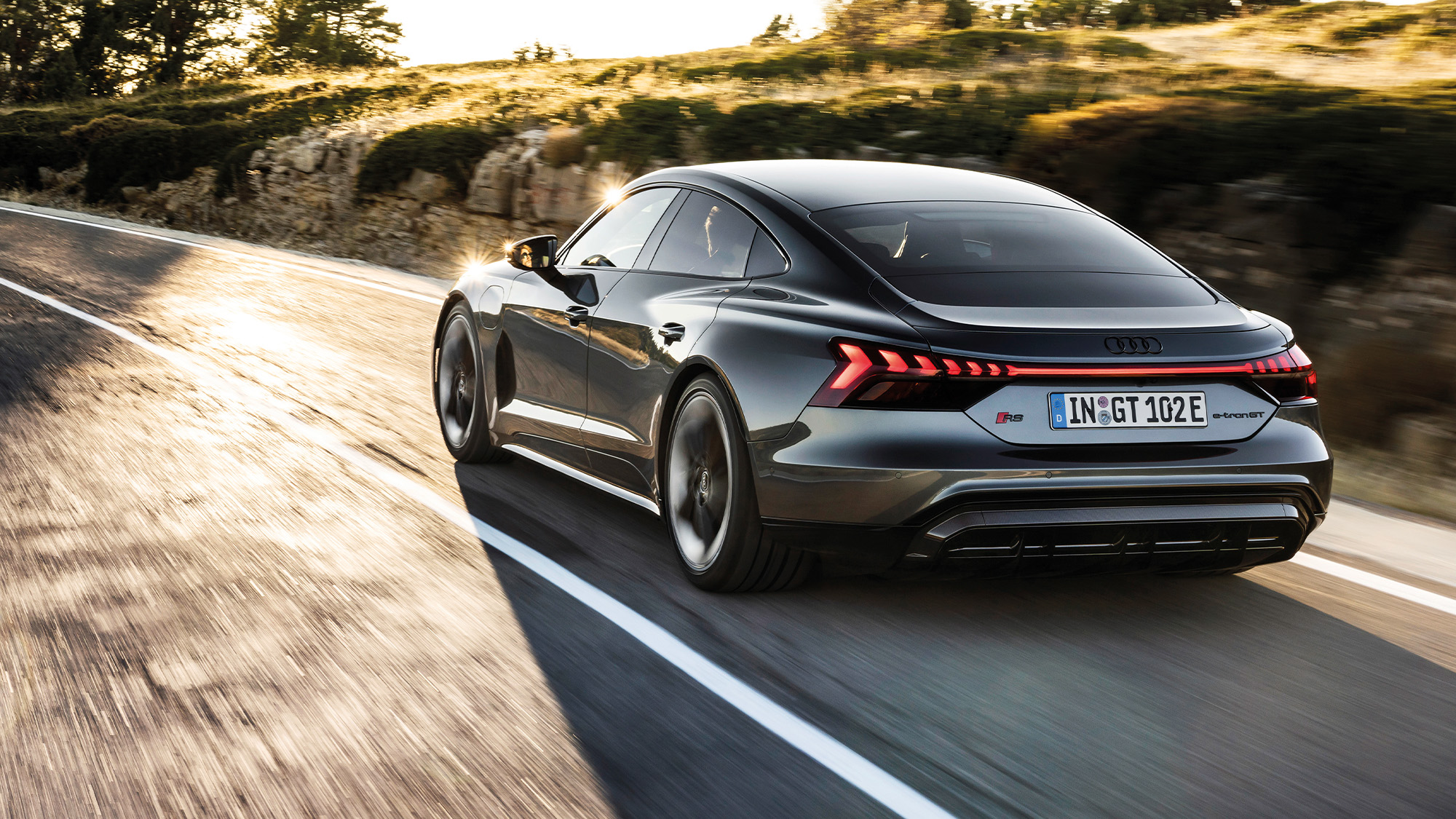 And in certain ways, that identity sits more comfortably within the constraints of electric car design than the Taycan. I admire Porsche for trying so hard to make its car interesting to drive, but there’s no doubt that Audi was right not to bother and to concentrate on staying true to its own brand values which, let’s face it, are rather more closely aligned to what EVs find easiest to provide than Porsche.

That said, I have a strong hunch this is not the right model. My guess is that a nicely specified standard e-tron GT with a few choice options but a price still well below the sixfigure mark would be a far better bet. And when I’ve driven one, I’ll let you know.